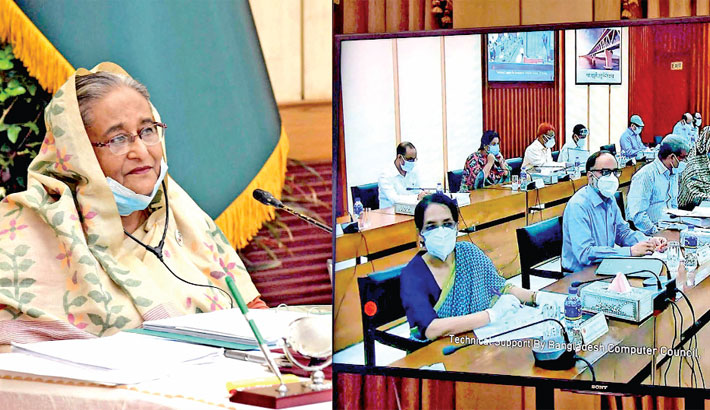 Prime Minister Sheikh Hasina presides over a meeting of the Executive Committee of the National Economic Council (ECNEC) through a video conference at Ganabhaban in the capital on Monday.

The approval came at the first Ecnec meeting of the new fiscal year held on a virtual platform from NEC conference room with Ecnec Chief Prime Minister Sheikh Hasina in the chair.

The Prime Minister and Planning Minister MA Mannan joined the meeting from Ganobhaban through a video conference.

“The Ecnec meeting has approved nine projects under four ministries and the total estimated cost of the projects is Tk 27.44 billion,” MA Mannan informed while briefing journalists about the meeting outcomes through another video conference.

The dredging work of two key rivers of Dinajpur district will be done under ‘Rehabilitation of Dinajpur Town Protection Project and Dredging of Dhepa and Gorveswari Rivers adjacent to Dinajpur Town.’

Bangladesh Water Development Board (BWDB) under the ministry of water resources will implement the scheme by June 2023.

The main objective of the scheme is to protect the Dinajpur town from flood and erosion through dredging of these rivers.

Water resources ministry also got another project approved. It is Rehabilitation of three projects in Dhamurhat, Patnitola and Mohadebpur upazila under Noagaon district and Atrai River Bank Protection including dredging works project.

The lone project under the Shipping Ministry is Establishment of global marine distress and safety and integrated marine navigation system (EGIMNS) Project.