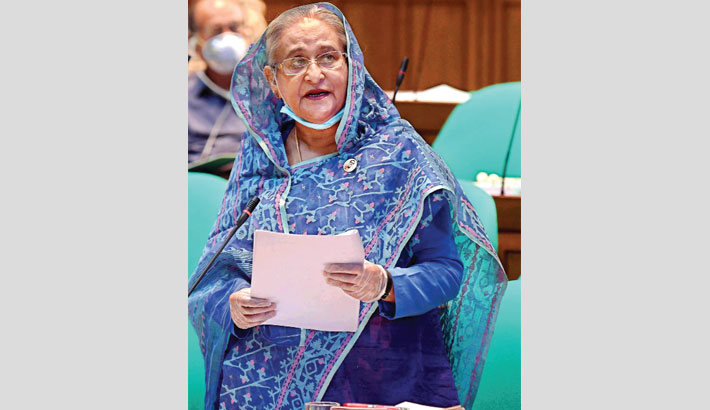 Prime Minister Sheikh Hasina on Monday expressed the hope that her government will be able to implement the proposed national budget for 2020-2021 fiscal with a growth target of 8.2 percent.

“We’ve never failed to implement budgets in the past and Inshallah, we’ll not fail in the future too as we always march forward with a specific work plan,” she said while speaking on the proposed budget in parliament. The proposed Tk 5.68 trillion budget for the new fiscal year is expected to be passed today.

Describing the reasons behind placing the budget with a target of 8.2 percent GDP growth, the premier said her government is optimistic about the implementation of the budget although many have termed it an ambitious one.

“We must have a target. Everything has become stagnant now due to the Covid-19 pandemic. But we hope that this situation will not continue. We’ve placed such budget considering the future,” she added.

Sheikh Hasina, also the president of the ruling Awami League, however, said it will be difficult for her government to implement the budget if the corona situation remains unchanged.

“But, we must have preparations. That’s why we have placed such an ambitious budget,” the premier told the told the House with Speaker Shirin Sharmin Chaudhury in the chair.

She said health, agriculture, and employment generation have been given priority in the budget by raising allocation in the annual development programme.

Sheikh Hasina said the government has set a target of 8.2 percent GDP growth in FY21 as they are hopeful that world as well domestic economy will recover from the corona fallouts gradually in 2021.

The country’s economy will come back to its previous condition by overcoming all the hurdles created over the ongoing coronavirus situation, the premier added.

She mentioned that four aspects had been taken into account while setting the 8.2 percent GDP growth target in the proposed budget amid the corona pandemic.

Though economic activities are being hindered, there has been no damage to economic infrastructure due to corona situation. Economy usually faces setback during natural disasters or wars, the premier said.

She also said supply and demand will increase in the domestic market as public expenditures will be increased to create jobs and increase the income of people.

“And if the stimulus packages announced by the government are implemented, the production and the supply chain will become normal again,” Sheikh Hasina said.

The premier said it is expected that vaccine for corona treatment may come in the market in October-November next, and if so, people will soon get back to normal life in Europe and America, and Bangladesh’s export earnings will return to the previous level. Besides, Sheikh Hasina said, fuel prices are gradually increasing in the international market.

“So, the present crisis facing Bangladesh regarding the overseas employment and remittance will go,” she said.

The premier also said some Tk 100,000 million, fifth highest allocation, has been allocated for the health ministry to fight the corona situation.

The premier said her government would recruit more physicians, nurses and health workers in fighting the ongoing wave of the coronavirus pandemic.

“We’re going to appoint 4,000 more nurses. The health minister has already been directed in this regard. The appointment will be made soon,” she added.

The government has already appointed some 2000 physicians and 6,000 nurses to ensure treatment of the corona patients.

The premier said posts of 2,000 more doctors and 3,000 posts of technicians has already been created.

“The process for appointment in those posts has been started,” she added. Highlighting various steps amid the corona situation, the premier said her government approved two projects involving Tk 25,000 million to buy test kit and other equipment while another project is at the final stage. “I believe, once the projects are implemented, our capacity will be strengthened further to face the Covid-19 situation.” The premier also reiterated her government’s zero tolerance policy against corruption.

The government has been committed to uproot corruption and ensure good governance,” she said, adding that anti-corruption drive will continue to keep the ongoing development activities and uphold the achievements of the government.

About a media report that Dhaka Medical College and Hospital (DMCH) spent Tk 200 million on providing meals for the doctors, nurses and health workers, the premier said the government into the expenditure.