SRK thanks fans for ‘allowing’ him to entertain for 28 yrs 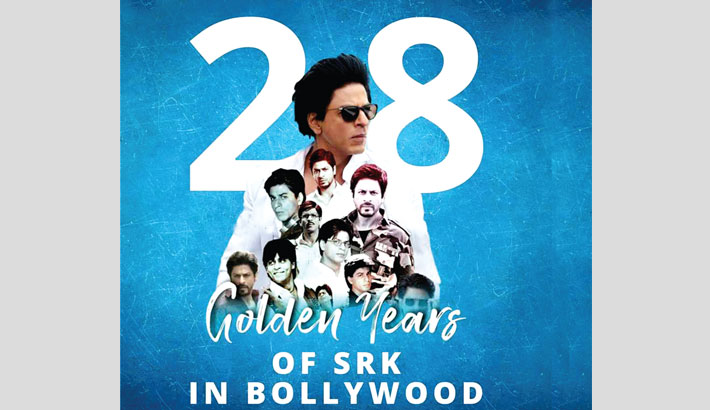 Bollywood superstar Shah Rukh Khan completed 28 glorious years in the Bollywood industry on June 25, 2020. His fans made the day even more memorable by sharing photos, videos, dialogues, posters, etc for the actor and made hashtag #28GoldenYearsOfSRK one of the top trends on Twitter, reports IndiaTV.com.

The actor has been entertaining the fans ever since his debut in the Bollywood industry that happened with the 1992 film 'Deewana' directed by Raj Kanwar and co-starring Rishi Kapoor and Divya Bharti in pivotal roles. There has been no looking back for him after that.

And now the 'King Khan' took it as an opportunity to thank all of his fans for allowing him to entertain them. Taking to social media, the 'Badshah' wrote a heartfelt note about how his passion became his profession. Not only this, he even shared a portrait of himself and thanked wife Gauri Khan for capturing the moment in the lens.

Taking to Instagram, the actor wrote alongside the picture, "Don’t know when my passion became my purpose and then turned into my profession. Thank u all for so many years of allowing me to entertain you. More than my professionalism I believe my passionalism will see me through many more years of service to all of you. 28 years and counting... and thank u @gaurikhan for capturing this moment."

With the country being locked down, everyone was limited to their houses. Not only this, but even the shooting was also stalled which is the reason why fans could not have a glimpse of their favourite celebrities. On Friday, photos of the superstar went viral online in which he is seen standing in the balcony of his house Mannat and it appears that he has been shooting. Wearing a dark-colored checkered shirt and a pair of denim, SRK is seen acting with cameras and light at the golden hour. There is another man in the photos who is seen holding a mic above him.

The 'Devdas' actor also mourned the death of Sushant Singh Rajput and shared a photo with him and wrote about his energy, enthusiasm, and happy smile. He captioned the same, "He loved me so much...I will miss him so much. His energy, enthusiasm and his full happy smile. May Allah bless his soul and my condolences to his near and dear ones. This is extremely sad....and so shocking!!."