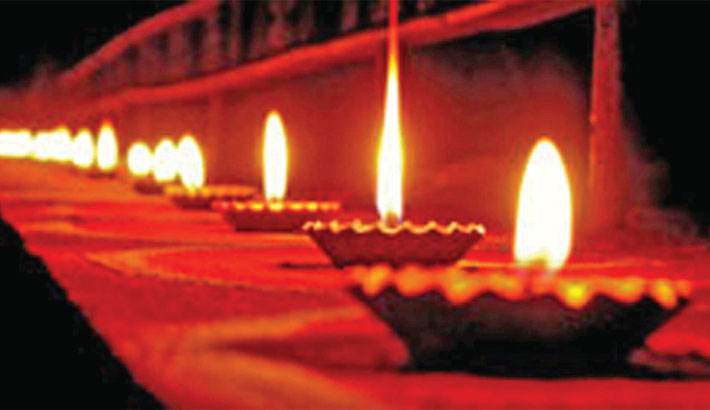 According to Matsya Puran and Indian mythology, sage Manu was the first human being (as Adam and Hawa in Islam and Adam and Eve in Christianity) created by Brahma, God the Creator. So, he is the first representative of Lord Brahma in this earth. In the above Puran it was mentioned that using his divine powers Lord Brahma created the Goddess Shatarupa (as Saraswati was first called) and Manu was born out of the union between Brahma and Shatrupa. In early texts, it refers to the archetypal man or to the first man, progenitor (one who starts) of humanity. Manav, the Sanskrit term for human, means Manu or children of Manu. Basically a Sanksrit word, Manu carries different meanings. Manav (both Bengali and Sanskrit) is an extended form of the word man. Etymologically, man (English) and Manu are closely connected to each other. In the Vedas, the most sacred scripture of the Hindus, Manu appears as the performer of the first sacrifice. He is also known as the first king and most of the rulers in medieval India tried to trace their genealogy (ancestral lineage) back to him, either through his son (the solar lineage) or his daughter (the lunar lineage).

In later texts, Manu has been described as Swayambhu. Manu is the title or name of 14 mystical Khatriya rulers of the earth or alternatively as the head of mythical dynasties that begin with each cyclic kalpa (aeon) when the universe is born afresh. As mentioned in Purans, each kalpa consists of 14 Manvantars (transition from one human race to another) and each Manvantar is headed by a different Manu. It is believed that the present universe is designed to be ruled by the 7th Manu named as Vaivasvata. The title of the text Manusmriti refers to the first Manu – Swayambhu, the spiritual son of Lord Brahma.

Manu resembles the characteristics of the Bible (written first in Hebrew) figures of Noah who managed to escape from being extinct in a great flood and also Adam, the first man. In the Shatapath Brahman it has been described how he was warned by a fish that a flood would destroy the whole mankind. To save himself and as advised by the fish, he built a boat and boarded on it. When the flood ended he tied this boat to the fish’s horn and was safely steered to a resting place on the top of a mountain. Then he, as the sole survivor among human beings, performed a sacrifice, pouring oblations of butter and sour milk into water. After one year a woman was born there from the water who announced herself as daughter of Manu. These two human beings became the ancestors of a new human race to replenish the earth.  In Mahabharata (great Indian epic by Vyasdev based on the Bharat Dynasty) the fish has been identified with Lord Brahma but in the Purans (Ancient Lore) it has been depicted as Matsya Avatar, the fish incarnation of Lord Vishnu.

In other scriptures regarding cosmological speculations, a day of Lord Brahma’s life is divided into 14 parts called Manavanrar (interval of human life), each day consists of 30,67,20,000  years. In every secondary cycle the world is recreated and a new Manu appear as father of the upcoming human race.

Messages of Lord Brahma regarding life cycle and human force delivered to sage Manu are known as Manu Sanghita (anthology of scriptures, law and scripture) What is human force, what are the reasons behind, origin of human force, where lies the salvation – all these matters are clearly and elaborately described in  Manu Sanghita. It describes the human race as human force of creator. According to Manu all scriptures of the Hindus are broadly classified under two heads– Sruti (hearing, sacred knowledge) and Smriti (remembrance of codes of law and mandatory behavioural pattern of the Hindus). The Vedas, Chandi, Upanishad are Sruti. On the other hand Ramayan, Mahabharat, Gita are Smriti. Life of Manu covers 71 great ages (Mahajug). Manu exists in 29th of those ages. The present great age consists of 4 sub ages – Satya, Treta, Dwapar and Koli. According  to Manu Sanghita, duration of Satyajug is 17,28,000 years, Tretajug 12,96,000 years, Dwaparjug 8,64,000 years and Kolijug 4,32,000 years. Kolijug has passed only 5118 years, more 4,26,882 years are still ahead.

It is believed that the first Manu was swayambhu (self-born) and he was married to Shatarupa, the first woman. They had three daughters – Akuti (yearning), Devahuti (invocation of god) and Prasuti (streaming). Devahuti was married to sage Kardama. She gave birth to nine daughters and a single son named Kapil (brown coloured, a sage known as the introducer of Sankhya philosophy) . Prasuti gave birth to Yajna (son) and Akuti was the mother of a son and a daughter. Kapil and Yajna, sons of Devahuti and Prasuti respectively, were incarnations of Lord Vishnu. Swayambhu Manu, alongwith his wife, Satarupa, went to the forest to practise austerities on the bank of the Sunanda River. After some days, Rakshasas (demon like, ferocious and carnivorous species of human beings with sharp teeth and claws) attacked them but Yajna, accompanied by his sons, the demigods, quickly defeated and killed them. Then Yajna himself held the place of Indra, the King of the heavenly planets.

Svarocisha, the second Manu, was the son of Agni (fire) and his sons were headed by Dyumat, Sushena and Rochishmat. During the age of this Manu, Rochana became Indra, the ruler of heaven and there were many other demigods, headed by Tushita.

The third Manu was Uttam, son of Priyavrata. His sons were Pavan, Srinjay and Yajnahotro. During the reign of this Manu sons of sage Vashista, headed by Pramad, became the seven saintly persons. They exist as a cluster of seven stars commonly known as Saptarshmandal (the Great Bear, Ursa Major) in the sky. Their names are – Marichi, Atri, Angira, Pulastya, Pulaha, Kratu and Vashista. The Satyas, Devasrutas and Bhadras became demigods and Satyajit became Indra. From the womb of Sunrita, wife of Dharma, the Supreme Lord Narayan appeared as Satyasena and killed all the evil Rakshasas who created anarchy in the universe, alongwith Satyajit, who was Indra at that time.

Apart from Hindu scriptures, according to Jain mythology, the 14th patriarch named Nabhiraja, mentioning him also as Manu. It connects ancient Jain tradition to Hindu mythologies because these 14 patriarchs in Jain myths are similar to the 14 Manus in Hindu myths. The Manu of Jainism is the father of 1st Tirthankara Rishabhanath (Adinath).  In this way, through Manu, Jainism and Hinduism come closer.