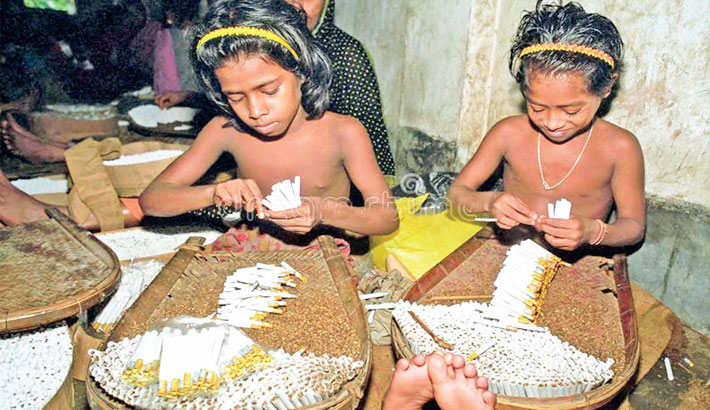 The World Day Against Child Labour was celebrated globally on June 12. This year’s celebration was totally different from past celebrations of the Day. COVID-19 pandemic has threatened the entire humanity from various perspectives. Of them, health and economic crisis are perhaps the two major challenges that has been faced by the present world. Unfortunately, children are often the first to suffer. This year, the theme of the World Day Against Child Labour was “COVID-19: Protect Children from Child Labour, Now More Than Ever”. The theme means a lot and guides us to do more than the past.

According to a statement issued by the United Nations (UN): “Almost one in ten of all children worldwide are in child labour. Although the number of children engaged in child labour has declined by 94 million since 2000, the rate of reduction slowed by two-thirds in recent years.” It is also disheartening to learn that 152 million children between the ages of 5-17 were engaged in child labour, almost half of them-73 million in hazardous child labour. Moreover, almost half (48%) of the victims were aged 5-11; 28% were 12-14 years old; and 24% were 15-17 years old. According to a statistics, child labour is concentrated primarily in agriculture (71%) - this includes fishing, forestry, livestock, herding and aquaculture - 17% in services; and 12% in  industrial sector, including mining. It indicates that the children are engaged more in either paid and unpaid labour in agriculture-based countries.

The present situation and resulting economic crisis, according to the assumptions, will create more vulnerable situation for our children. Therefore, people are trying to find out ways towards overcoming the unwanted situation.

Islam is a complete code of life that guides us on the right path in any situation. In Islam, children are the most beloved not only in the family but also in the society. Therefore, the entire humanity is responsible for taking care of them specially for building a healthy and peaceful future.

Although, in Islam, the primary responsibility goes to their parents, others are not out of their responsibility. The Qur’an states that the children are amanah to their parents and a Will of Allah (SWT.). (See: Qur’an, Surah al-Shurah, 42:29-50). This responsibility starts from the beginning of the child’s life in the mother’s womb. (See: The Qur’an, Surah Luqman, 31:14). Islam sets the parents’ responsibilities to their children unless they reach their puberty. All the facilities for their better future should be provided by their parents according to their ability. These efforts are considered as sadaqah and Ibadah as well. Therefore, parents will be rewarded for all the good activities they do for their children.

In absence of parents, in any situation, the responsibility goes to their near relatives than others in the society and to the government as well. Therefore, in a critical sense we all are responsible for every child in society. They have the right to grow up in a good environment and build their bright future along with providing all the facilities they need to either by their parents or any others in society.

Even though, their parents perform their responsibilities to their children by providing all facilities, we are also responsible for loving them, giving them a good and healthy environment and guiding them to the right path as well. Prophet Muhammad (PBUH) said, “When one of you loves his brother, then let him inform him of it.” (Sunan al-Tirmidhi).

However, Islam does not prohibit child labour at all which is not harmful to them; to their health, to their future. They can help their parents in house and outside, if there is any need. They can also involve themselves in both unpaid labour like charity and humanitarian work and paid labour but there are some terms and conditions. In that case, there should be four principles applied. Such as (i) Ihsan (goodness and generosity), (ii) relationship with others, (iii) equity and (iv) accountability.

It is also noteworthy to state that, there is a difference between Islamic and conventional approaches to defining child and their age. Moreover, the present situation demands earning for survival. It is also well known to us that all child labour is not hazardous. Therefore, they can involve themselves (paid and unpaid labour) but the following must be applied:

They should not be bound to do the work. It depends on their willingness.

The work should not be difficult and hazardous to them. Because, this is the sunnah of Allah that He does not charge a soul except [with that within] its capacity. (Surah al-Baqarah, 2: 286)

The work should not be harmful to their health and a barrier to growing up smoothly.

All the employers even their parents, must be generous to them.

They must have a good relationship with others.

Equity must be practiced instead of equality.

We all are accountable to them; to their bright future.

The work meaning the child labour should be for their training and developing skills instead of earning money only.

Let me conclude by mentioning the nature of child labour in Islam that has been defined and classified in two terms. Such as:

(i) Umaalah: It means to use the child as a worker and they treated as any other labour. It may harm them physically, psychologically and socially. It represents the exploitative nature of work like using them in industries, construction works, workshop et cetera where they are exposed to health hazards. It is totally prohibited (haram) in Islam.

(ii) Tashghiil: It is such kind of work that helps either to develop the life skills of a child or to bring any benefit to him/her. These benefits can be in the form of money or any other benefit. For example, a son can help his father’s small business in his free time where he can also learn the process of doing business. Moreover, an orphan child may get employed and get money that will help him to build up his life better. But, he/she must be provided with shelter and care as well.

Let Islam guides us logically and scientifically to overcome the unexpected and unwanted situations of our life. Therefore, we must try to understand the exact teachings of Islam through it’s two main sources; Qur’an and Sunnah. Thus, we can be successful in both the worlds; life in this world and hereafter.

The writer is a scholar in Islamic studies and researcher on Islamic views on contemporary issues. (Email: [email protected])