Protests over Floyd death continue in US 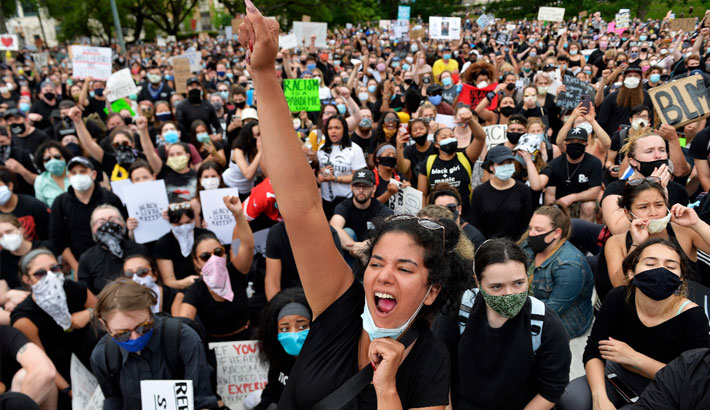 Protesters rally on the steps of the State House, calling for an end to Police injustice, during a Black Lives Matter rally in Providence, Rhode Island on Friday. –AFP PHOTO

WASHINGTON: Multiple protests over the death of George Floyd once again took place across Los Angeles and the wider Southern California region on Friday as demonstrators throughout the US continue to demand justice in the Minneapolis case, US media reported.

As with every other day so far this weekend, Hollywood was one of the many places where demonstrators gathered. A few hundred showed up outside the Laugh Factory on Sunset Boulevard to demand justice for George Floyd as well as Brianna Taylor on what would’ve been her 27th birthday.

The protest remained peaceful, even as the group marched down the street and back up again. At one point, they briefly blocked off traffic in both directions as police officers supervised nearby. The group slowly began to disperse without incident. In Downtown Los Angeles, thousands of people gathered and marched in the streets. Many people knelt at City Hall.

“We all hope for this antidote for this pandemic, but more importantly, as an American, I hope for an antidote for racism, for social injustice, for the inequalities,” Moore said.

Over in Westminster, protesters marched from a local park to City Hall, where they sat on the ground holding signs in front of dozens police officers suited in riot gear.Chants of “Take a knee” and “Quit your job” were heard sporadically as some demonstrators directly addressed officers to share their experience with law enforcement. Some said they faced police brutality at the hands of some of the officers who were present present.

One protester who grew up in Orange County said she has experienced racial profiling in surrounding cities. But, she said, she can also understand that many of them are “just as disgusted” with the racial inequities across the country and that they’re just like her when they take off their uniform.