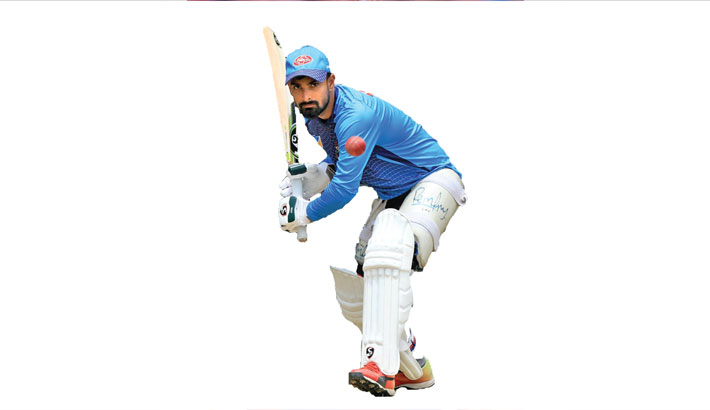 Bangladesh opener Liton Das credited former head coach Chandika Hathurusingha for helping him choose a lighter bat as he feels now with the lighter bat, he can play more shots.

Hathurusingha, the former Bangladesh head coach, had once boldly admitted how he wasn't disappointed in Liton who was failing to score big at the time. “All the flowers don’t bloom together,” he had said, pointing his fingers towards some of Liton's teammates who had shown more promise despite having being less skilled.

Liton changed his approach during the Tri-nation series in Ireland leading up to ICC World Cup 2019 and he was suddenly more consistent, something which he hadn't been for all his flamboyance.

“I usually used heavier bat early in my career, until 2016. Then (Chandika) Hathurusingha, former coach of Bangladesh, told me that less heavy bat will give me more time, shot speed and shot selection will be better if I use a light bat. Since then I use lighter bat,” said Liton.

“Another Interesting issue is, when I do not score with a bat and I reject it immediately irrespective of the quality of the bat. I always change the bat when I don’t score runs for two-three games,” he said. Liton said that his approach regarding his practice session changed with time and it is providing dividend since the tour of Ireland.

Liton's maiden hundred against India in the final of Asia Cup 2018 had given an indication that he had finally arrived at the big stage but all the promise seemed to be evaporating to the extent that Liton wasn't even sure of the World Cup squad berth.

Liton admitted that he changed his workout philosophy since the Ireland Series.

Liton, until the Tri-nation Series in Ireland in May 2019, had played 27 ODIs and scored 508 runs at an average of 19.54 and a strike rate of 79.75. He knew very well that his back was against the wall. The presence of Neil McKenzie, Bangladesh's white-ball batting consultant, surely helped him as well.

“When I set off for Ireland with the team, I did not know whether I would be playing in ICC World Cup or even in the Ireland series for that matter but one thing I did was to make sure that I was practicing more than before. I used to be happy after the practice session. From then on, whenever I saw the nets empty I started batting. I used to request the coach to let me bat after everyone is done with the nets,” he said.

“From then onwards, I started to see changes in me, in my fitness and batting, especially after watching Shakib Al Hasan peaking during the World Cup. I was more determined to improve my fitness after that and it probably played a part in my performance,” he said.

Liton added that he started having a fresh outlook towards his cricket and he was lucky to have help along the way.

“Earlier I used to think a lot about luck. Basically in cricket luck is very important but now I feel that one can change his luck by practicing. I used to believe that luck is not in my favour when I failed and there was nothing I can do about it. Now, I think that if I had practiced more, then the chance of being successful would have been higher,” Liton said.

“I first met Neil during that Ireland tour. He liked my batting style and always tried to inspire me. He and our head coach always told me that I have potential in me and I can score runs. I can play any kind of shot. Neil pointed out how when I batted in the nets, for say 20 minutes, I used to bat very attentively for the first 5-10 minutes and lost attention in the last 10 minutes,” he said.

“When I batted, Neil used to stand behind me and told me to play late. At first, I was having some problems adapting to it as I used to play cricket my style and now learning a new technique was difficult. But I started to feel better when I applied those things. Before I used to play early and lose control, but now I have the control on the ball like I can hit the ball wherever I want to. I get time to play the ball,” he added.

Playing late and being attentive, the two McKenzie lessons, brought rewards for Liton, who went on to score 571 runs in nine matches averaging 81.6 runs with a strike-rate of 115.2. Meanwhile, he consistently played well in the last edition of Bangabandhu Bangladesh Premier League and scored two sensational centuries against Zimbabwe which includes his record breaking highest ODI score for his country.

Liton also thanked former spin bowling coach Sunil Joshi, who is currently the India National Cricket Team Chief Selector, for making him understand the importance of his wicket and though Liton failed to deliver initially he still remembers his words of wisdom.

“I had some conversation about this with Sunil Joshi and he once told me that the next time you are going to play in the domestic circuit, try to bat at least for 35-40 overs. You will then have a practice of not getting out and will also be able to bat for a long time. Then you will understand what is your game, how to play in which situation,” Liton said.

“Those words stuck with me. Though he was a bowler but he bowled against famous batsmen, sometimes he gave me examples of Sachin Tendulkar also. He taught me a few things like how to play spin bowling on slow wickets and on fast wickets,” said Liton.

Liton admitted that he was a little late to understand that he's allowed to be different.

“I can't play like Shahid Afridi. I depend on timing and Afridi depends on force. I was a little late to understand it. Everyone used to say that I am a timing-based player. Until one realises his skill himself, he cannot understand his own mistakes. Now I understand that I can't do things by applying force,” Liton, who is presently the record holder of the highest individual ODI score for Bangladesh with his 176 runs from 143 balls against Zimbabwe, said.