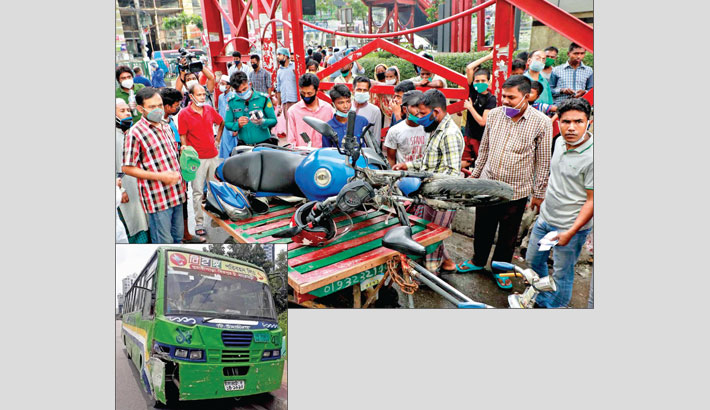 A bus of Bihanga Paribahan (inset) hits a motorcycle first and runs over two pedestrians while trying to leave the spot in the capital’s Bangla Motor area on Thursday, leaving two people dead on the spot.-SUN photo

Two persons, including a motorcyclist, were killed and another one was hurt after a bus of Bihanga Paribahan mowed them down in the capital’s Bangla Motor area on Thursday.

The deceased are named as Belayet, 52, from Muladi in Barishal, and Maksudur, 42, from Sarail in Brahmanbaria. Zakir, 40, is now undergoing treatment.

Police seized the bus and detained its driver, Jafar Molla.

Refatul Islam, assistant commissioner (traffic south division) of Dhaka Metropolitan Police, said the bus coming from Shahbagh ploughed into the motorcyclist and two pedestrians around 11:15 am, leaving Belayet and Maksudur dead on the spot.

On receiving information, police whisked off to the spot, sized the bus and detained its driver, the police officer said.