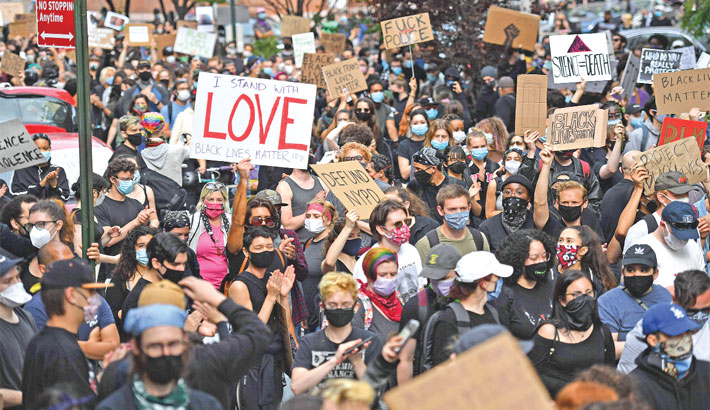 Protesters demonstrate during a “Black Lives Matter” protest in New York City on Tuesday. Anti-racism protests have put several US cities under curfew to suppress rioting, following the death of George Floyd while in police custody. —AFP PHOTO

WASHINGTON: Protesters defied curfews across the United States Tuesday as leaders scrambled to stem anger over police racism while President Donald Trump rejected criticism over his use of force to break up a peaceful rally, reports AFP.

Standoffs between police and demonstrators stretched into the night in cities from New York to Los Angeles over the death of George Floyd, an unarmed African-American man whose killing has brought once-in-a-generation protests to the nation for the past week.

But there were fewer reports of the looting and violence that had soured street demonstrations in previous nights.

Tens of thousands gathered earlier in Houston to pay a hometown tribute to Floyd, who grew up in the Texas city and is to be buried there next week.

“Today is... about George Floyd’s family—we want them to know that George did not die in vain,” Mayor Sylvester Turner told an estimated 60,000 people.

A tearful Roxie Washington, the mother of Floyd’s six-year-old daughter, told a news conference she wanted “justice for him because he was good.

“No matter what anybody thinks, he was good.”

In New York, which on Tuesday prolonged its first curfew since World War II for the full week, AFP reporters saw hundreds refusing to go home after the 8:00 pm cutoff, instead chanting slogans and peacefully walking the streets in Manhattan and Brooklyn.

Protestors attempting to cross the Manhattan bridge were pinned there for an extended period by police on both sides, but were finally allowed to return to Brooklyn, according to a New York Times reporter on the scene.

Mayor Bill de Blasio told CNN it had been “much calmer” a day after several Manhattan luxury stores were looted, praising an increased and “vast presence” of police on the streets.

Minnesota took one of the first concrete actions to address the grievances behind the uprising, which began after Floyd’s death on May 25 in the state’s largest city Minneapolis.

Former president George W. Bush called on the US to examine its “tragic failures” and to “listen to the voices of so many who are hurting and grieving.”

And in Los Angeles, one of dozens of cities hit by unrest, police officers and Mayor Eric Garcetti dropped to their knees in a symbolic act of solidarity as they met marchers led by African-American Christian groups.

But protesters gathered outside Garcetti’s residence late into the evening. An AFP reporter witnessed a group of at least 200 refusing to disperse and subsequently arrested.

In Washington DC, thousands returned to the streets Tuesday for a peaceful “Black Lives Matter” march.

Hours after the 7:00 pm curfew protesters could be heard chanting, as National Guard troops stood on the streets near the White House and helicopters hovered above. Broadcast footage showed police firing tear gas shortly after midnight, but the situation appeared to be calm overall.

“I’m just tired, essentially, of being scared of police, of not getting justice,” said Jada Wallace, an 18-year-old protester outside the White House earlier who said she was ready to risk arrest.

In the same place on Monday, federal police had abruptly opened tear gas and fired rubber bullets to break up a non-violent protest, clearing a path for Trump to stroll outside for a photo-op at a historic church damaged the previous night.

The move was loudly condemned by religious leaders, the president’s political rivals, and onlookers around the country.

But Trump, who has rejected the traditional presidential role of healer, voiced glee on Twitter over the response in Washington and accused the leadership of New York—led by the rival Democratic Party—of succumbing to “Lowlife & Scum.”

He pushed back against the criticism later on Twitter, writing: “You got it wrong! If the protesters were so peaceful, why did they light the Church on fire the night before? People liked my walk.”

Joe Biden, Trump’s presumptive Democratic rival in November elections, denounced the crackdown as an abuse of power and promised, if elected, to tackle the “systemic racism” in the country.

“Donald Trump has turned this country into a battlefield driven by old resentments and fresh fears,” Biden said in a speech in Philadelphia, also hit by violence.

The United States also faced unusual, if polite, criticism from some international allies including Germany, Britain and Australia.

“I hope that these peaceful protests won’t slide further into violence, but even more than that I hope that they will make a difference in the United States,” Maas told reporters.

A Las Vegas officer was in “grave condition” Tuesday after being shot during protests overnight. An armed Hispanic man was shot and killed by police after raising his gun in a separate, nearby incident.

Four officers were also shot overnight in St. Louis. None of the injuries was life-threatening.

But one retired St Louis police captain was shot dead early Tuesday outside a ransacked store.

Trump tweeted that David Dorn, who was black, was “viciously shot and killed by despicable looters.”