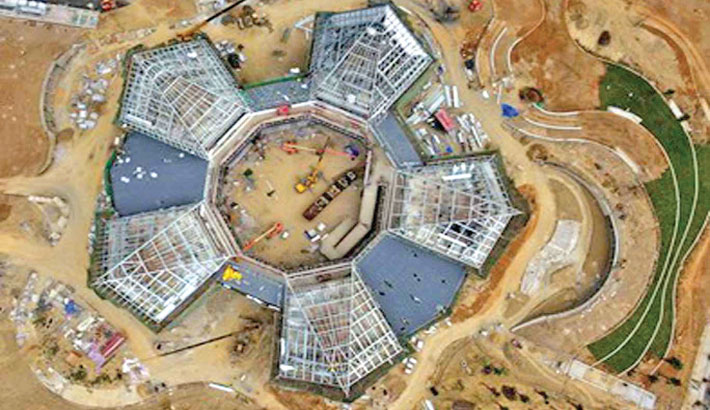 BEIJING: Chinese authorities on Monday released a master plan for the Hainan free trade port, aiming to build the southern island province into a globally-influential high-level free trade port by the middle of the century.

A free trade port system focusing on trade and investment liberalization and facilitation will be "basically established" in Hainan by 2025 and become "more mature" by 2035, according to the plan jointly issued by the Central Committee of the Communist Party of China (CPC) and the State Council, reports Xinhua.

The authorities expect to make Hainan, China's largest special economic zone, the frontline of China's integration into the global economic system, according to the plan.

Supporting Hainan's construction of a free trade port system with Chinese characteristics is a significant move designed, arranged and promoted by Xi Jinping, general secretary of the CPC Central Committee, said the document.

It has also been a strategic decision of the CPC Central Committee based on the domestic and international situations, it said, noting that the world is facing a new round of major development, changes and adjustment, with protectionism and unilateralism on the rise and economic globalization facing greater headwinds.

Building the Hainan free trade port is of vital importance for pursuing an open economy, deepening market-based reform and improving the business environment, as well as a strategic choice for advancing high-quality development and concrete action to support economic globalization and building a community of shared future for humanity, said the plan.

Instead of rushing for quick results, China will advance the plan gradually. Hainan will be given more autonomy in reform and will be encouraged to make both the laws and the regulatory system more flexible and efficient, thus clearing institutional obstacles hampering the flow of production factors.

The construction of the free trade port will provide support to national strategic goals in terms of institutional innovation, growth impetus and greater opening-up. Hainan will enhance exchanges and cooperation with Southeast Asian countries, and promote joint development with the Guangdong-Hong Kong-Macao Greater Bay Area.

The master plan also envisions grasping opportunities in the technological and industrial revolution, focusing on tourism, modern services and high-tech industries to foster new competitive edges for the island.

The rules and regulations will be made to align with international norms, while a system for risk prevention and control will be in place, it said.

Focusing on trade and investment liberalization and facilitation, the free trade port will adopt a modern industrial system that allows for a smooth flow of key production factors, supported by tailored taxation mechanisms, efficient social governance and the rule of law.

To enable the free flow of trade, the island province will introduce measures that center on zero tariffs for the trade of goods, while facilitating both entry and business operation for services providers.

Market entry will be markedly widened for investments in an open, transparent and predictable environment featuring strengthened intellectual property rights protection and fairness in competition, in order to further unleash the vitality of market entities.

Cross-border flow of funds will be ensured, with efforts including the further opening up of the free trade port's financial sector, which entails support for setting up trading venues for financial products related to energy, shipping, property rights and equities, as well as clearing centers.

The general plan also called for more accommodative traveling regulations to encourage talent in high-end industries to stay, reside or work in the free trade port.

Logistics will be smoothed under the construction of shipping hubs in the New International Land-Sea Trade Corridor, with airspace control over the free trade port relaxed and more flights and air routes launched, according to the plan.

While ensuring the security of data flow, China will expand the opening-up in the data field, innovating institutional design, and cultivating and developing the digital economy in the free trade port.

The document underlined establishing an internationally competitive taxation system that should be suitable for the high-level free trade port by sticking to the principle of zero tariffs, low tax rates, simplified taxation system and the rule of law.

Efforts will also be made to advance the reform of government institutions and the transformation of government functions, said the master plan, encouraging the application of blockchains and other technologies in the modernization of China's system and capacity for governance.

A system of rule of law for the free trade port will be established in a bid to create an internationally leading rule-of-law environment.

In the meantime, effective measures will be rolled out and implemented to forestall and defuse risks in fields including trade, investment, finance, data flow, ecology and public health, in a targeted manner, according to the document.