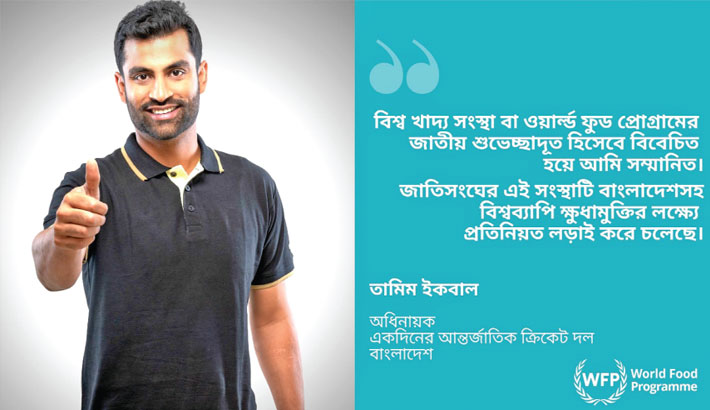 Bangladesh ODI skipper Tamim Iqbal has been named as the National Goodwill Ambassador for the United Nations World Food Programme (WFP) in Bangladesh.

Tamim will raise awareness about WFP programmes in Bangladesh which cover 64 districts across the country through its school feeding, nutrition, livelihoods, and refugee operations in Cox’s Bazar.

While working as the National Goodwill Ambassador Tamim will have the opportunity to see first-hand how WFP, in support of the Government, is working to reach Zero Hunger.

In response to being the ambassador of WFP Tamim said that he is honoured and will do his part to restore hope for families and communities that need their support.

“I am honoured to be named National Goodwill Ambassador for WFP - the United Nations agency that fights hunger worldwide, including my own country Bangladesh,” Tamim quoted saying in the media release.

“While Bangladesh has made impressive economic growth in the recent years, poverty is still rampant, especially in rural parts of the country. For many, the current COVID-19 crisis is making their lives much more challenging. I hope to do my part to help WFP fight hunger and restore hope for families and communities that need our support,” he added.

As the first Bangladeshi to score 10,000 international runs, Tamim Iqbal is one of Bangladesh’s most beloved batsmen, opening regularly for the team, said a press release of WFP on Monday.

“As an accomplished athlete, beloved by many both inside and outside Bangladesh, Tamim brings with him not only his popularity and reach, but his incredible work ethic, compassion and humanitarian spirit,” Richard Ragan quoted saying in the media release. “We couldn’t be more thrilled to have him joining our WFP family.”

The United Nations World Food Programme - saving lives in emergencies and changing lives for millions through sustainable development. WFP works in more than 80 countries around the world, feeding people caught in conflict and disasters, and laying the foundations for a better future.