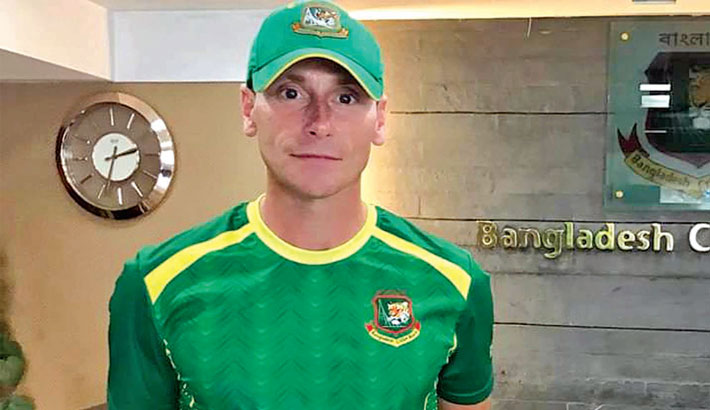 Bangladesh Under-19 National Cricket Team’s strength and conditioning coach Richard Stonier is helping the young players to stay motivated during the pandemic by regularly arranging online classes from abroad trying to motivate them with the motto- embrace panic with patience.

After capturing the maiden world title for the country in February, the victorious Under-19 players hardly got any chance to play as the coronavirus pandemic stopped cricket at all levels in the nation. While staying indoors as per the government directives, the players are trying to keep them fit by following the online classes present by Stonier.

Many cricketers of the Under-19 World Cup winning squad informed daily sun that they are very fortunate to have someone like Stonier guiding them as it helps them immensely.

When contacted Stonier was more than happy to share the methods to daily sun he is following during the online classes with his charges who had won the first ICC tournament for the country.

“We got routines like a train like an athlete. We got 30-minute pure core development in abs blast, short intense sessions, 45 minutes sessions, so it's just a variety really and a lot of boys were completing Ramadan as well. Obviously lockdown is getting easier around the world. So, the beauty of YouTube is that we can stream live and record and it's also beneficial for everybody to move forward it's not just helping the players, it's also helping a lot of Bangladeshi people during difficult times,” he said.

Stonier said that the major emphasis on his classes remains on teaching them new techniques while the only disappointment for him is that some cricketers fail to connect due to the internet.

“It's just very simple. Since we've been in the situation, since our return from the World Cup I've been in communication with all of the players. Some players have found it difficult due to Wi-Fi internet connections. Some players have been able to join in the live in every session. So, it's just an ongoing thing and it's motivating for the guys, they can see me, they can bounce off my energy, they can learn new techniques, different ways of training and I'm very grateful that they are enjoying it and loving it,” said Stonier.

“So, I'm going to live on YouTube in 20 minutes. Everybody can access the workout on YouTube by mobile phone, tablet, iPod or even link to your Television screen. So, it's very good and over time once we get our web-cams setup then the picture quality will be even fast and furious and it's just because a complete lockdown, it doesn't mean that you can't train and obviously in the UK the lockdown is getting a lot easier. We know we can go outside and stuff like that,” he said.

“We are all very eager to get into a normal way of life. The words I use at the moment with everybody is embrace panic with patience. We will get through this pandemic together. We will triumphant it. But we have to be patience. Let's face it there's not gonna be serious competitive cricket right now. But over time we can build them back up in term with the energy levels, the training they have been doing with me it's completely different to what they used to. But also it's giving the drive of focus, they are young enough, intelligent enough to know their own bodies and just build it up over time. Because they have been training continuously for the last 10-11 weeks online with me, when they go outside they won't feel like they have gone backwards,” he said.

“Maybe some players who have struggled to do certain stuff but they know their own bodies and the main thing is that they will never ever go backwards where they were two years ago, they are in a far better position now,” he said.

“Hopefully three-four weeks of good training outside skill work, preparation, technique they can be on the playing field onto next four-six weeks, InshaAllah and hopefully we're gonna be okay but I've got no concern for the young boys they are very intelligent, they are very talented, very mature, respectful and they know their own bodies with help with people around the BCB with myself we will get back to where we were and again embrace the panic with patience there's no rush and we will get there,” he concluded.