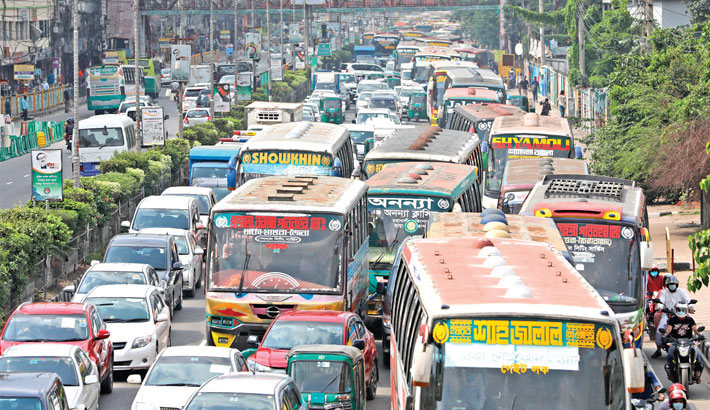 Vehicles got stuck in a long tailback on Banani road after resumption of bus service in the city on Monday. The usual traffic jam reappeared in the capital after a 66-day shutdown following coronavirus outbreak across the country. —Kamrul Islam Ratan

After being closed for more than two months, public transport has officially resumed across the country on Monday.

Some public buses and human-haulers started running in the capital from Sunday. After the notification was issued by the ministry to increase bus fares by 60 percent, all public transport was started operating across the county.

One of the conditions under which the rent is increased by 60 per cent is to follow the guidelines of the health Ministry. But, most of the transport operating in the capital is not following the instructions.

Moreover, the new chart of increased rent was not seen hanging. While many passengers complained that they were charged double.

While visited Shyamoli, Kalyanpur and College gate areas in the capital on Monday from 9:00 am to 11:00 am, it is seen that passengers are being picked up and dropped off everywhere. The helper or the conductor is dragging the passengers on the bus in the same old habit.

It was seen that buses of Savar, Ashulia, Manikganj, Mirpur and others different routes were running. Most of its transports have fewer passengers. The rule of sitting one passenger in each of the two seats inside the bus has been followed.

The main doors of most transports are locked. But most of the buses are seen standing everywhere to pick up passengers. No rules are being followed in picking up and dropping off passengers.

Hand sanitizers or disinfectant spray was not seen in most of the transports. Bus drivers and associates are told to wear masks and gloves, but in many cases, this is not being done.

Sharif, a helper on a Labbaik Paribahan bus plying from Jatrabari to Savar, said the bus had hand sanitizers, which were being applied if passengers wanted.

Tareq Aziz, a passenger of Projapoti Paribahan, said “I am afraid of getting in bus. But I have to go far and I don’t have my own transport. It is not possible to walk in hot weather. Since the number of passengers is less, if the buses follow the rules and pick up the passengers slowly, I would be relieved for us.”

Passengers were seen getting on the bus from Sayedabad terminal to different areas of Dhaka by public transport on Monday. No transport was seen spraying disinfectants at that time. However, the transport workers claimed that the transports were kept sterile before they left.

On the other hand, compliance with hygiene rules has been observed in several public transports. In Khilgaon area, disinfectant spray was seen in the hands of the supervisor of Midline Transport. Hand sanitizers are being provided to the passengers as needed while getting on the bus. Inside the bus, passengers were seen sitting with empty seats.

The BRTA conducted mobile courts in different parts of the capital on Monday. The organization said that this activity will continue.

“Long-distance vehicles are also being driven in compliance with hygiene rules. Our owners are supervising everywhere” he added.

He said sterile tunnels have been set up at various terminals including Mohakhali. Passengers have been made to wear masks. And those who violate the hygiene rules will not be allowed to drive on the road.

On the second day of the launch, there was a huge crowd of passengers at different river ports of the country. Police seized a launch in Barisal for not following hygiene rules.

Barishal sadar river police station officer-in-charge (OC) Abdullah Al Mamun said the launch MV price did not maintain a distance of three feet between the passengers. Health rules were not obeyed. The launch will remain closed until further notice.

Trains to various destinations are following the hygiene rules at the railway stations of the capital like on Sunday. However, many people complain about the complexity of getting tickets online.