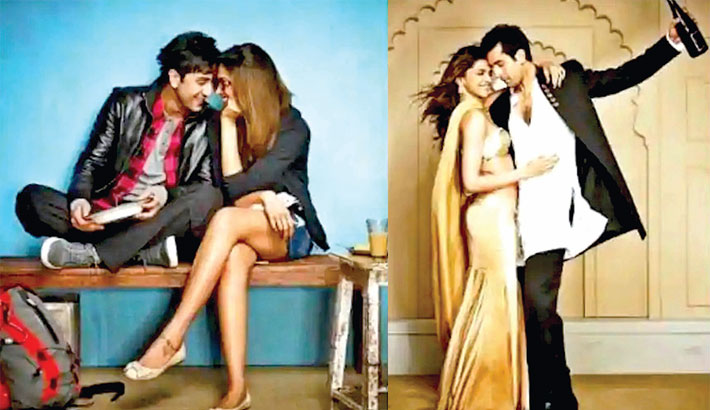 Yeh Jawaani Hai Deewani completes seven years on Sunday. To mark the same, Deepika shared the photos as a treat for her fans on social media. “Our very first look test...‘Yaadein mithai ke dibbe ki tarah hoti hain...Ek baar khula, toh sirf ek tukda nahi kha paoge’-Naina Talwar (Memories are like a box of sweets, once you open it, no one can eat just one piece),” she captioned the post.

One picture shows Deepika’s Naina dressed in a satin champagne saree while Ranbir’s Kabir is seen in a dark suit. The two are in a mood to party and booze and it all looks very much like their song Badtameez Dil from the film. The second film shows their characters from the first half of the film when they took a trip to Manali. Deepika is seen with her thick glasses and shorts while Ranbir is in his flirty mood. The film was directed by Ayan Mukerji and also starred Aditya Roy Kapur and Kalki Koechlin. It was about Kabir who loves to travel and does not wish to commit to a place or a life. That was until he met Naina and she shows him about the comfort and the security of one’s home and the people who love us.

Even the film’s producer Karan Johar got nostalgic on the occasion. Taking to Instagram Story, Karan posted a video clip, celebrating the seven illustrious years of the film. In the video, we can see a few stills from the film. The instrumental music of the title track, Yeh Jawaani Hai Deewani is also heard playing in the background. “Celebrating 7 years of Yeh Jawaani Hai Deewani,” the video read.

Along with the video, Karan wrote, “It’s been 7 whole years since this gang of friends came into our lives & taught us all about friendship and love. A movie still so relevant for all generations!!#7YearsOfYJHD @apoorvamehta18#[email protected]#AdityaRoyKapur @kalkikanmani#AyanMukerji @DharmaMovies.”