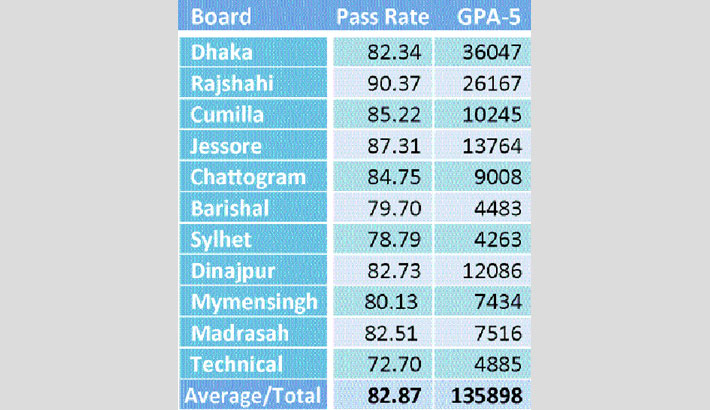 Results of Secondary School Certificate (SSC) and equivalent examinations 2020 held under 11 education boards in the country were published on Sunday with 82.87 per cent pass rate.

The combined success rate has increased by 0.67 per cent this year. It was 82.20 per cent last year.

Prime Minister Sheikh Hasina announced the results in the morning at a videoconference in her official residence Ganabhaban in the capital.

Expressing satisfaction over the results, she said the better success rate is the result of the combined efforts from all.

She has advised the unsuccessful students to take further preparations with patience and work hard so that they could pass the next exams with a great success.

Data of the results shows that the pass rate in SSC exams is 83.75 percent under nine general education boards, 82.51 percent in Alim exam under Madrasa board and 72.70 percent in vocational exam under technical board.

Rajshahi Education Board has kept its consistency in securing the top position among nine boards with 90.37 percent pass rate, while Dhaka board students had the highest number of GPA-5 scorers.

Like the previous years, Sylhet Education Board remained at the bottom in terms of pass rate and GPA-5. The board saw 78.79 percent pass rate.

In terms of GPA-5 obtainers, Dhaka board secured the top position with 36,047 students achieving the highest grade point among the education boards while Sylhet board remained at the bottom in terms of GPA achievers with only 7,434 GPA-5 scorers.

Madrasa and technical board

A total of 7,516 students obtained the maximum grade point average (GPA)-5 while the number of GPA-5 was 6,287 last year under the board.

Meanwhile, the pass rate of technical education board saw a little rise in this year’s SSC (Vocational) exam pass rate. The pass rate is 72.70 percent in the board which was 72.24 percent in 2019.

Girl students have shown better results—in both pass rate and scoring a GPA-5—in SSC and equivalent exams this year.

Female students are 2.47 percent ahead of their male counterparts in terms of pass rate. A total of 70,144 girl students secured GPA-5 while 65,754 boys got the GPA-5 under the 11 educational boards this year.

The girls were also ahead of boys even within the nine general education boards with a pass rate of 84.50 percent. Boys’ pass rate in the boards was 82.95 percent.

Science Group students has kept its consistency in securing the top position in terms of group wise results among nine general education boards with 94.54 percent pass rate which followed by 76.39 percent from business studies, and only 84.80 percent from the humanities groups.

A total of 318 students out of 336 from nine foreign centres have come out successful in the SSC examinations with 94.64 pc pass rate.

Like the previous year, the Education Ministry did not classify schools on the basis of merit this year. The best institution in the country in terms of pass rate and GPA 5 achievers was not mentioned in the published SSC results.

Students from 104 schools and madrasas under six education boards have failed to come out successful in this year’s SSC and equivalent examinations.

The board-wise number of such institutions is one in Dhaka Board, two in Jashore Board, one in Dinajpur Board, two in Mymensingh Board, 48 in Madrasa Board and 50 in Technical Education Board.

The number of schools and madrasas with zero results was 107 in 2019.