The next big thing in Bangladesh’s RMG sector 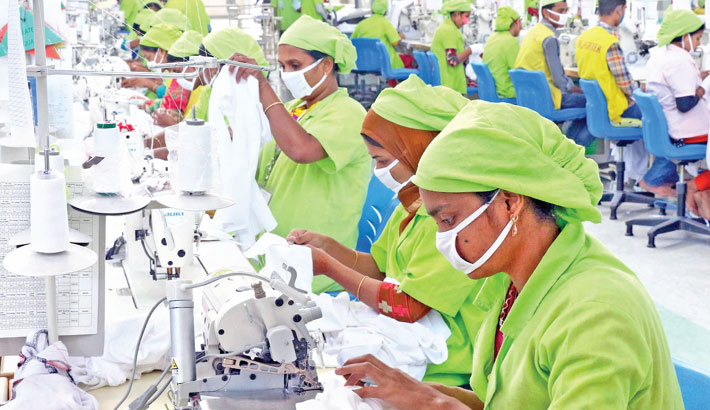 Globally, since March 2020 the economic activity has been halted due to Covid-19 Pandemic putting the entire world under great uncertainty. This pandemic could be seen as one of the biggest destroyer of jobs throughout this century.

The global economy could suffer losses between $5.8 trillion to $8.8 trillion that would be equivalent to 6.4% to 9.7% of global GDP, as reported by ADB. The outbreak-affected economy will witness a decline in global employment between 158 million to 242 million jobs in number where 70% of total employment losses will be in Asia and Pacific. In an analysis, International Labour Organization(ILO) warns that only for this devastating pandemic around 330 crore labours are at major risk to lose jobs around the world.

In USA more than 4 million workers filed for the jobless benefit this month, May 2020. The total number of people applying for unemployment aid stands out to more than 43 million since the coronavirus pandemic spread across the nation.

In Bangladesh, the Ready Made Garments (RMG) sector is the biggest foreign currency generating sector that provides direct employment to around 4.4 million people, 80% of them are women. Covid 19 has placed a noxious situation in this sector. Already 1 million workers are becoming unemployed due to the consequential effect of this pandemic.

A report published by Penn State University’s Centre for Global Workers’ Rights and the Worker Rights Consortium (WRC) noted that more than one million garment workers in Bangladesh have already been fired or furloughed, as a result of order cancellations and unwillingness of western buyers to compensate for abrupt cancellations. The garment factories surveyed mentioned that 98% of their buyers refused to contribute to the cost of paying partial wages to furloughed workers, required by law and 72% of furloughed workers were sent home without any compensation or payment. Meanwhile, 97% of buyers refused to contribute to the severance pay expenses of dismissed workers, also a legal entitlement in Bangladesh.

Situation gets worsen much when worldwide recognized western clothing brands like ‘JC Penney’, ‘Debenhams’, ‘Aldo’, ‘Forever 21’ announced themselves as ‘Bankrupt’ immediately after the sudden shock of Covid 19, leaving a great uncertain future to the man force working there. They are giant buyers of Bangladeshi garments industry. In a note, The Bangladesh Garment Manufacturers and Exporters Association says that 1,150 factories in Bangladesh had lost orders worth $3.18 billion due to the drastic effect of a pandemic while around 3,000 workers have also been suffering from financial difficulties since February.

A few days ago, a photo has been published in a local newspaper that depicted that Mostafiz Uddin, globally acknowledged as Denim Mostafiz, who is the Managing Director and CEO of Denim Expert, a Garment and Washing Inustry, cried into tears when he heard from Bank that his western buyers disagreed to pay a single penny for pre-ordering of clothes which his factory workers already prepared. Almost Tk 540 million gets outstanding to foreign buyers which they won’t pay because some of his partnering brands like Arcadia declared itself bankrupt. In this situation, Mr. Mostafiz got stuck in a helpless condition assuming massive risk about the future job certainty of two thousand workers working in Denim Expert.

A fundamental question peeps on the minds of readers about the rights of garment workers. Those poor people, whose only source of income is earning from RMG sector, what will they do? The stimulus package given by our Government has helped the export oriented industries a lot but considering the rampant impact of this pandemic that is likely to stand for a long time and make their living standard badly affected, then who else out there will compensate for such a big loss?

All concerned are emphasizing more on increasing funding in the health sector as Covid-19 is the most serious health crisis the world has ever experienced in a century. But, apart from the intent of increasing and strengthening health spending, protection scheme in income and livelihood is also inevitable for tackling prolonged economic recovery, especially in Bangladesh.

Being out of work will also have an impact on the mental health of those jobless workers. Unexpected unemployment not only puts impact on income, savings, and spending but on social status, dignity and family relationship.

Needless to say, our Government should take a diplomatic stance in front of international organizations to protect the subsistence of momentous wheels of our economy, our garment workers to ensure they wouldn’t be the worst sufferer of this pandemic effect.

This sudden unemployment crisis has created a risk factor for millions of workers in Bangladesh. So our government needs to make sure that particular rules regarding exporting are appropriately implemented by western clothing brand to tackle such quibble in the future. Moreover, a responsibility lies from the side of the International Labour Organization (ILO) to put pressure on giant companies so that they can make themselves aware of their business ethics and corporate good practices. Recognized humanitarian rights organizations should come forward to supporting this export-oriented sector that is constantly fulfilling the needs of the wear of many fashion minds across the globe.