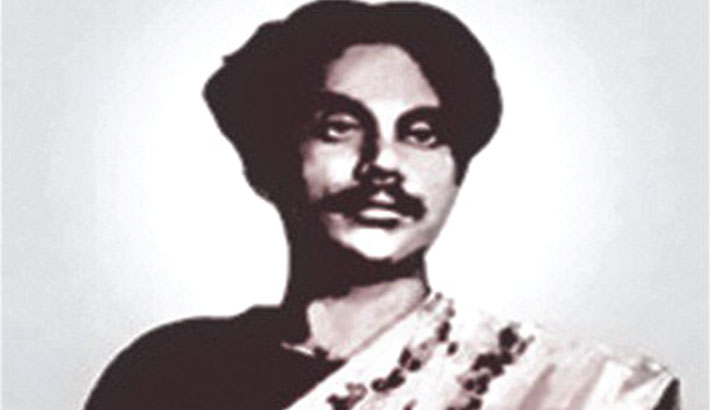 May 25 was the 121st birth anniversary of our national poet Kazi Nazrul Islam. He produced a large body of poetry and music with themes that included religious devotion and rebellion against oppression. Nazrul's activism for political and social justice earned him the title of "Rebel Poet". Nazrul's writings explored themes such as freedom, humanity, love, and revolution. He opposed all forms of bigotry and fundamentalism, including religious, caste-based and gender-based. Nazrul wrote short stories, novels, and essays but is best known for his songs and poems. He profusely enriched ghazals in the Bengali language. He is also known to have experimented with Arabic, Persian and Sanskrit words in his works to produce rhythmic effects.

Nazrul was born in 1899 in the village of Churulia, Asansol Sadar, Paschim Bardhaman district of the West Bengal, India. Nazrul's father KaziFaqeer Ahmed was the imam and caretaker of the local mosque and mausoleum. Nazrul's mother was Zahida Khatun. Nazrul had two brothers, Kazi Saahibjaan and Kazi Ali Hussain and a sister UmmeKulsum. He was nicknamed “Dukhu Mian”. Nazrul studied at a maktab and madrasa, run by a mosque where he studied the Quran, Hadith, Islamic philosophy and theology. His father died in 1908 and at the age of ten, Nazrul took his father's place as a caretaker of the mosque to support his family. He also assisted teachers in the school. He later worked as the muezzin at the mosque.

Attracted to folk theatre, Nazrul joined a travelling theatrical group “leto” run by his uncle Fazle Karim. Nazrul composed songs and folk plays for the group. In 1910, Nazrul left the troupe and enrolled at the Searsole Raj High School in Raniganj. He later transferred to the Mathrun English School. Unable to continue paying his school fees, Nazrul left the school and joined a group of kaviyals. Later he took jobs as a cook at Wahid's, a well-known bakery of the region, and at a tea stall in the town of Asansol. In 1914, Nazrul studied in the Darirampur School in Trishal, Mymensingh District.

Nazrul studied up to grade 10. In 1917, he joined the British Indian Army. He had two primary motivations for joining the British Indian Army: first, a youthful desire for adventure and, second, an interest in the politics of the time. He was posted to the Karachi Cantonment, where he wrote his first prose and poetry. His first prose work, "Baunduler Atmakahini" was published in May 1919. His poem "Mukti" was published by BangiyaMussalmanSahityaSamiti in July 1919.

Nazrul left the British Indian army in 1920 and settled in Calcutta. He published his first novel “Bandhan-hara” in 1920, on which he continued to work over the next seven years. His first collection of poems, which included "Bodhan", "Shat-il-Arab", "Kheya-parerTarani", and "Badal Prater Sharab", received critical acclaim. Nazrul grew close to other young Muslim writers, while working at the Bengali Muslim Literary Society, including Mohammad MozammelHaq, Kazi Abdul Wadud, and Muhammad Shahidullah. Nazrul and Muhammad Shahidullah remained close throughout their lives.

Nazrul reached the peak of his fame in 1922 with “Bidrohi”, which remains his most famous work, winning the admiration of India's literary society for his description of a rebel. He followed up by writing “Pralayollas”, and his first anthology of poems, the “Agni-veena” in 1922. He also published a volume of short stories, the “Byathar Dan” and “Yugbani”, an anthology of essays.

Nazrul started a bi-weekly magazine, “Dhumketu” on 12 August 1922 that was critical of the British Empire, which earning him the title of the "rebel poet." Nazrul aroused the suspicions of British Raj authorities. The police raided the office of Dhumketu after it published "AnondomoyeerAgomone", a political poem, in September 1922. Nazrul was arrested on January23, 1923 and charged with sedition.

On April 14, 1923, he was moved from Alipore Jail to a jail in Hooghly. He began a 40-day fast to protest mistreatment by the British jail superintendent and eventually got released from prison in December 1923. Nazrul composed numerous poems and songs during his period of imprisonment. In prison, Nazrul wrote the "RajbandirJabanbandi".Rabindranath Tagore dedicated his play "Basanta" to Nazrul in 1923. Nazrul wrote the poem "AjSrishtiShukherUllashe" to thank Tagore. His book “BisherBanshi” published in August 1924.

Nazrul became active in encouraging people to agitate against the British colonial rule, and joined the Bengal state unit of the Indian National Congress. On December 16, 1925, Nazrul began publishing “Langal”, a weekly, and served as its chief editor. During his visit to Cumilla in 1921, Nazrul met and later married Pramila Devi on April 25, 1924. Muslim religious leaders criticised Nazrul for his marriage to a Hindu woman. Despite controversy, Nazrul's popularity and reputation as the "rebel poet" increased significantly.

Nazrul believed in the equality of women, a view his contemporaries considered revolutionary, as expressed in his poem “Naari”. Nazrul vastly contributed in profusely enriching ghazals in Bengali, transforming a form of poetry written mainly in Persian and Urdu. Nazrul's recording of Islamic songs was a commercial success.

Nazrul's mother died in 1928, and his second son, Bulbul, died of smallpox the following year. His first son, Krishna Mohammad, had died prematurely. Pramila gave birth to two more sons – Sabyasachi in 1928 and Aniruddha in 1931 – but Nazrul remained grief-stricken and aggrieved for a long time. His works changed significantly from the rebellious exploration of society to deeper examination of religious themes. His works in these years led Islamic devotional songs into the mainstream of Bengali folk music, exploring the Islamic practices of namaz, roza, hajj, and zakat.

Nazrul wrote and composed music for nearly 4,000 songs collectively known as Nazrul Geeti. In 1942 at the age of 43, he began to suffer from an unknown disease, losing his voice and memory. On May 24, 1972, Nazrul was brought to the newly independent Bangladesh to live in Dhaka with his family. In January 1976, he was accorded the citizenship of Bangladesh. Despite receiving treatment and attention, Nazrul's physical and mental health did not improve. In 1974, his youngest son, Kazi Aniruddha, died and Nazrul soon succumbed to his long-standing ailments on 29 August 1976. In accordance with a wish he had expressed in one of his poems, he was buried beside a mosque on the campus of the University of Dhaka. Tens of thousands of people attended his funeral. Bangladesh observed two days of national mourning.