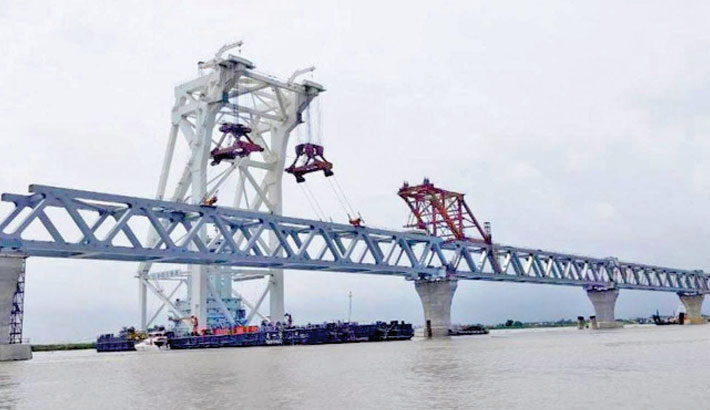 The 30th span of the much-anticipated Padma Bridge being installed at Janjira end on Saturday, bringing 4.5 kilometres of the structure into view. —SUN photo

The construction work of the much-hyped Padma multipurpose bridge project is making steady progress despite worsening coronavirus situation in the country.

Project engineers could successfully install the 30th span, making 4.5km of the 6.15km mega structure visible despite shortage of experts and manpower.

The 150-metre long span was installed on 26th and 27th piers at Jajira point on Saturday.

“In spite of a disastrous situation and a crisis moment, I want to give you good news that Padma bridge’s 30th span has been installed to make 4.5km of the bridge visible,” Road Transport and Bridges Minister Obaidul Quader said in a video message.

“You know that despite all the odds Prime Minister Sheikh Hasina’s top priority project construction of Padma bridge is moving forward. Now, only 11 spans are left” he added.

The new span could be installed within less than one month after installation of the 29th span earlier on May 04 with project engineers’ and workers’ efficiency.  The country entered a two-month long shutdown from March 26 to ensure that deadly coronavirus does not spread, virtually stalling most economic activities like elsewhere of the world.

Obaidul Quader informed that project engineers are working round the clock to install the 31st span by June 20 to make more progress.

With the installation of the 30th span, construction work of the main bridge advanced 89 percent, informed the Project Director Shafiqul Islam.

any kind of work hamper due to heavy siltation on the site.

They informed that they had to dig an alternative channel at Jajira point to create a separate channel for ferry movement in Shimulia-Kanthalbari ferry route that delayed construction of piers no 26 and 27.

The rest 10 spans will be installed at Mawa point where the river is comparatively much deeper with strong current, which will not create any siltation problem during the rainy season, according to project engineers.

The 6.15km mega bridge will have two decks—the upper deck will facilitate plying of vehicles and the lower deck plying of trains.

The bridge is expected to establish a direct link between the capital and 21 south and south western districts, which will create 1.2 percent additional GDP in the country.

The construction work started with own funding in December 2014 is scheduled to be complete by June 2021. Project officials, however, hinted that the work might face some delay because of the virus pandemic.