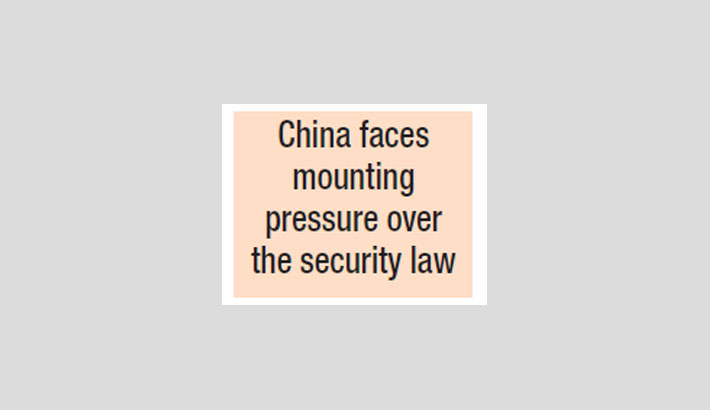 BEIJING: China’s parliament approved plans Thursday to impose a security law on Hong Kong that has ratcheted up tensions with the US and sparked new protests over fears the city is losing its special freedoms, reports AFP.

The vote by the rubber-stamp National People’s Congress (NPC) spurred the US and Britain to call for the United Nations Security Council to meet informally on Friday to discuss the issue.

And it came hours after Washington revoked the special status conferred on Hong Kong, paving the way for the territory to be stripped of trading and economic privileges.

US Secretary of State Mike Pompeo said the status had been withdrawn because China was no longer honouring its handover agreement with Britain to allow Hong Kong a high level of autonomy.

“No reasonable person can assert today that Hong Kong maintains a high degree of autonomy from China,” Pompeo said.

China made the security law a priority at its annual NPC session, after huge pro-democracy protests rocked the financial hub for seven months last year.

The law would punish secession, subversion of state power, terrorism and acts that endanger national security, as well as allow mainland security agencies to operate openly in Hong Kong. Delegates endorsed plans for the law with an almost unanimous vote and enthusiastic applause.

Li Zhanshu — the chairman of the NPC Standing Committee which will now draft the law — said the move was “in line with the fundamental interests of all Chinese people, including Hong Kong compatriots”. Hong Kong’s embattled leader, Carrie Lam, said she welcomed the resolution being passed.

As required in the resolution, Lam said she would submit regular reports to Beijing and “step up law enforcement and public education for safeguarding national security”.

But the law has met fierce criticism.

“It’s the end of Hong Kong.... They are cutting off our souls, taking away the values which we’ve always embraced, values like human rights, democracy, rule of law,” pro-democracy lawmaker Claudia Mo told AFP.

Meanwhile, China faced growing international pressure Friday over its move to impose a security law on Hong Kong that critics say will destroy the city’s autonomy, with the United States and Britain placing the issue before the UN Security Council, reports AFP.

The US, Britain, Canada and Australia led criticism of the planned law, which would punish secession, subversion of state power, terrorism and acts that endanger national security, as well as allow Chinese security agencies to operate openly in Hong Kong.