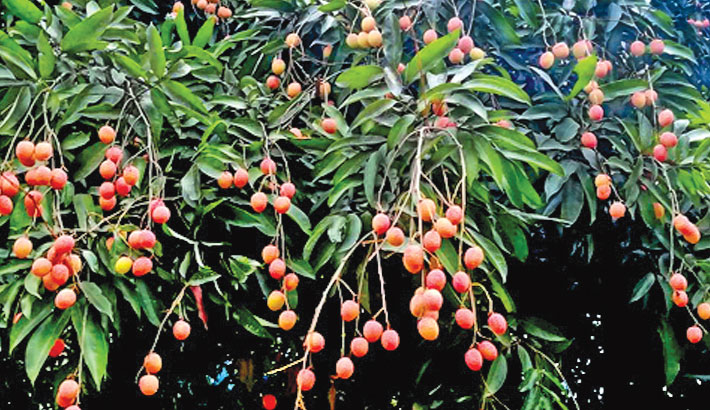 RAJSHAHI: Trading and marketing of litchi has reached peak everywhere in the region involving hundreds of labourers both males and females in harvesting, segregating and transportation of the delicious seasonal fruit amid the Covid-19 pandemic.

Market sources said harvest has been continuing in full swing with plenty of supply, but the pandemic has brought frustration among the public in general including litchi growers, traders and the consumers this season, reports BSS.

Mustafizur Rahman Khan, a senior journalist in the city, said Rajshahi has a long tradition of brisk business of various summer fruits especially litchi and mango.

But, this year’s pandemic situation is new which is totally detrimental to the fruit business.

Even though the juicy fruit litchi has appeared in the local markets including Rajshahi city and its adjacent areas.

Trader Faridul Islam at New Market gate area said on Thursday that many farmers are harvesting litchi with the hope of getting legitimate money.

He, however, said the market price of the mouth-watering fruit is comparatively low this season due to the troubled situation. A comfortable situation everywhere in the society is very important to make any business profitable, Islam added.

Dr Alim Uddin, principal scientific officer of Fruit Research Station, told BSS that litchi is grown well in Rajshahi and Dinajpur districts in the country’s northwest region but the fruit of Ishwardi is very delicious and famous across the country.

In Rajshahi, there are around 375 hectares of litchi orchards with creation of new ones. He said commercial farming of some of the fruits especially mango and litchi is gradually being enhanced in the region.

Ishwardi is now being adjudged as capital of litchi as it possesses commercial litchi orchards on more than 3,000 hectares with around three lakh trees. Age of two lakh trees is above 15 years. Apart from this, there are scores of litchi trees on homesteads and adjacent areas throughout the upazila.

Number of trees is gradually increasing here as the farming is being adjudged as profitable, said Dr Alim Uddin.

He said around 230 crore litchis were produced here this season valued at around Taka 400 crore.

He said the yield of litchi has been affected to some extent due to the scorching heat and rainless condition of the season. But in all aspects, there will be an expected yield, he hoped.

He said there are hundreds of litchi orchards on more than 1,000 hectares of land that produces huge yields which meet the local demand as well as being consigned to other parts of the country every year.