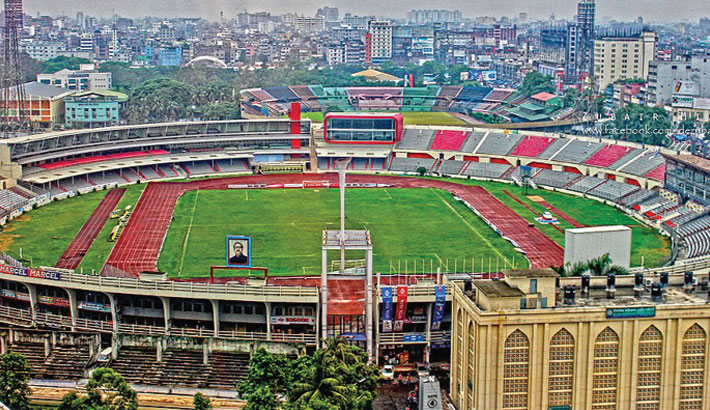 Asian Football Confederation (AFC) put Bangladesh National Stadium (BNS) in their list of iconic stadiums in a list termed ‘Great Grounds of Asia: Central and South’ alongside other historical stadiums of Central and South Asian region.

The national multipurpose sports arena BNS is named after Father of the Nation Bangabandhu Sheikh Mujibur Rahman. The stadium was built for cricket in 1954 and hosted several historical events and meets including the opening ceremony of ICC Cricket World Cup 2011, SAFF Championships in 2003, 2009 and 2018, South Asian Games 2010, an international friendly football between Argentina and Nigeria in 2011, an exhibition boxing match of boxer Muhammad Ali in 1978.

AFC wrote about BNS: “Originally built for cricket in 1954, Bangabandhu National Stadium has transformed over the years into one of the most important venues in Bangladesh. It had multiple renovations and re-developments but was fully revamped for the opening of the 2011 Cricket World Cup.

Still one of the largest stadiums in the nation with a 36,000 capacity, it is home to the Bangladesh national team, who have earned success in front of their home fans. The arena welcomed their South Asian rivals for the SAFF Championship in 2003, 2009 and most recently 2018. But the 2003 edition will have to be the most memorable campaign.

After a flawless group stage campaign, Bangladesh overcame India in the semi-finals, before hoisting the Championship trophy at home when they beat Maldives 5-4 on penalties after the match ended 1-1 in extra time.

Abahani Limited Dhaka and Mohammedan Sporting Club share the stadium as their home ground as well, and the stadium has played a major part in club Continental action. It was the venue for the 1990-91 Asian Club Championship final, where Esteghlal secured their second title after beating China PR's Liaoning FC.”

The other stadiums of the list are: Azadi Stadium of Tehran, Pakhtakor Stadium of Tashkent, Salt Lake Stadium of Kolkata and Central Republican Stadium of Dushanbe.