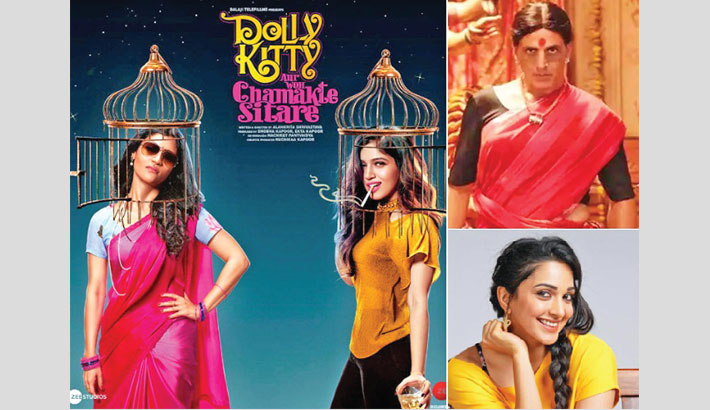 After Gulabo Sitabo and Shakuntala Devi, at least a dozen movies seem to be taking the direct-to-OTT route instead of waiting for traditional theatrical release once cinema halls open in the post-lockdown phase. While big budget films like the Sooryavanshi and 83 producers are ready to wait for a theatrical release, many are in talks with leading OTT platforms that already have lucrative deals to offer, reports Hindustan Times.

Bhumi Pednekar and Kriti Sanon-starrer Dolly Kitty Aur Woh Chamakte Sitare might be the next to arrive on one of the digital platforms. Produced by Ekta Kapoor and directed by Alankrita Shrivastava, the small budget film addresses social taboos and is believed to be apt for an online release.

One of Akshay Kumar’s many films lined up for release this year is Laxmmi Bomb and unlike Sooryavanshi, there are high chances it may release online. According to Mid-Day, a source has revealed that the actor was in talks with the newly launched Disney+Hotstar for the direct-to-web release.

Ishaan Khatter is desperately praying for his upcoming film Khaali Peeli, opposite Ananya Panday to release only in theatres but if his prayers will be answered remains uncertain. Reacting to reports of the film’s rights already sold to an OTT platform, Ishaan had told Bollywood Hungama, “Khaali Peeli is a film we made for the theatres. My prayers are that the theatres would be open sooner than later, whenever that may be, and my prayers are that it comes out at the theatres because that film really has to be watched on the big screen”.

Like his father, Abhishek Bachchan is also set to witness an online release amid lockdown. The Anurag Basu film is a dark anthology comedy, which was scheduled to release on April 24.

With Amitabh Bachchan’s Gulabo Sitabo already set for an online release, the actor is rumoured to have another film heading directly to Netflix. His football-based film Jhund may soon arrive on the OTT platform.

Janhvi Kapoor has already witnessed the release of her film Ghost Stories on Netflix and it seems she may have to see two more releases on the digital platform. While there is more possibility of her Roohi Afzana releasing online, it may take the makers some time to take a decision on her another film, Gunjan Saxena: The Kargil Girl.

A trade source told Mid-Day, “They are all complete and awaiting release. Indoo Ki Jawaani, RoohiAfzana and Shiddat are in the last leg of post-production and may explore the digital route.” However, producer Karan Johar has asked the media “not to reach any assumptions”.

Indoo Ki Jawaani with Kiara Advani as the lead protagonist and Mimi that features Kriti Sanon as a surrogate mother are also reportedly in line for a digital release. n