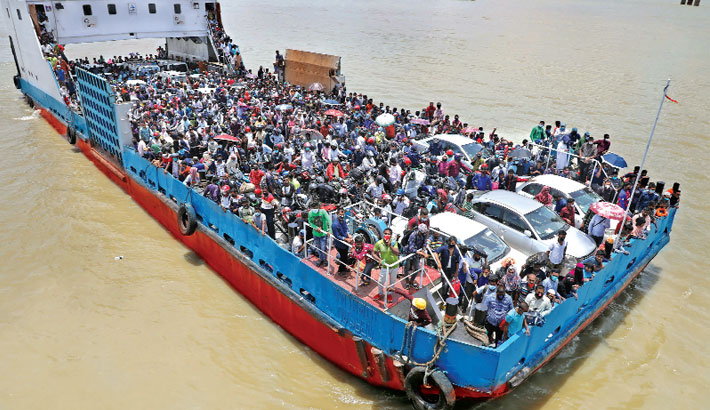 A ferry crammed with Dhaka-bound people reaches near Shimulia ghat in Munshiganj on Friday. People are returning to the capital amid risk of coronavirus infection. – Md nasir uddin

Following Eid celebration, thousands of people are making an arduous journey to Dhaka and its suburban districts due to lack of transport only to secure their livelihood while the risk of coronavirus is on its upward trajectory.

Eid holidays are over and the general holidays of the government are also coming to an end today (Saturday).

As a result, traffic pressure is increased on the roads, highways and ferry terminals on Friday.

Social distancing and hygiene are not being maintained anywhere. So, they are returning to Dhaka with coronavirus (Covid-19) risk.

Due to the closure of public transport, passengers are heading to their destinations paying high fare on other modes of transportation like private cars, microbuses, CNG-run auto-rickshaws and motorcycles.

While talking to daily sun, passengers at different spots coming towards the capital shared their bitter experiences.

Passengers said they are going to Dhaka with a great risk to save their jobs. They are suffering due to lack of public transport on the road. They are forced to pay extra fare due to shortage of transport.

Goalanda Ghat Police Station Officer-in-Charge (OC) Ashikur Rahman said those who came home on Eid were returning to Dhaka. That is why there is a pressure of passengers and small vehicles on

“We have requested Bangladesh Inland Water Transport Corporation (BIWTC) to increase ferries on this water route,” he added.

According to Bangladesh Inland Water Transport Corporation (BIWTC) authorities, there are 14 small and big ferries on this route.

Thousands of passengers are coming from Kathalbari Ferry Terminal to Shimulia Ferry Terminal, the gateway to 21 southern districts of the country.

Twelve ferries have been plying the route since Friday (May 29) morning. All the ferries are seen to have vehicles as well as lots of passengers.

Even when there is high risk of being infected with coronavirus, Dhaka-bound passengers are crossing the Padma in those jam-packed ferries.

Mohammad Faisal, Assistant Manager (Commerce) at BIWTC's Shimulia Ghat, said, “A total of 12 ferries, including four Ro-Ro ferries, have been plying the Shimulia-Kathalbari route since dawn. The pressure of private cars and small vehicles is high at Kathalbari Ghat.”

“So far, thousands of vehicles have come to Shimulia Ghat from Kathalbari Ghat. There are some private cars and small vehicles. However, they do not have to wait for the ferry,” he added.

Meanwhile, people were seen returning on the Dhaka-Mymensingh highways in pickups, private cars, motorcycles, auto-rickshaws on Friday. No social distancing is being maintained.

Shariful Islam, a small shop owner, said, “Eid is over, so we are in a hurry to return to work. As public transport is still closed, we are paying extra fare to various transport for returning to Dhaka.”

People were seen stuffing into auto-rickshaws, pickup and human haulers on the Dhaka-Tangail-Bangabandhu bridge highway, Tangail bypass road, and in Mirzapur and Elenga areas.

Gazipur Metropolitan Police (GMP) Commissioner Md Anwar Hossain police are working to ensure the safety and social distance of the passengers at different points of the road.

Police would also be active in maintaining social distancing if public transport was introduced in a limited range, he added.

However, if public transport is introduced from May 31, the need to return is expected to increase.

On Thursday the government decided not to extend the ongoing general holiday after May 30. The government has issued a gazette notification on Thursday allowing limited operation of public transport and offices from May 31 to June 15 amid the coronavirus outbreak.

However, there are some directives and restrictions that need to be followed till June 15.

It said public transports – buses, trains and vessels – will have to maintain health guidelines.

All government, semi-government and autonomous offices will resume under self-management but ailing staff and pregnant women have been asked to refrain from joining work, the notification said.

Everyone has to wear face masks and strictly follow 13-point health directives. During the period, all officials are directed not to leave the work stations.

Educational institutions will remain closed during this period.

Meanwhile, the government has permitted markets and shops to remain open from 10am to 4pm on condition that they follow health rules.

The health authorities announced detection of 2,523 new patients in the last 24 hours, raising the total cases to 42,844. Twenty-three more people died from coronavirus during this period, taking the death toll to 582.