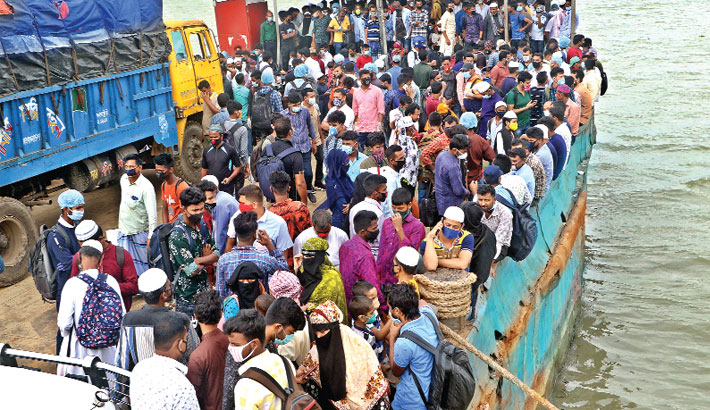 A crowded ferry leaves Shimulia ghat in Munshiganj on Friday to cross the river Padma. People crammed into the ferry to go to their village homes amid risk of coronavirus infection ahead of Eid-ul-Fitr festival. —MD NASIR UDDIN

Thousands of people are leaving the capital for their village homes to celebrate the Eid-ul-Fitr festival with their near and dear ones after the authorities withdrew the transport restriction partially on Friday.

Thousands gathered at Shimulia of Munshiganj and Paturia of Manikganj ferry ghats in the morning in their desperate bid to cross the Padma River as ferry services remained suspended for last few days.

“I am going to my village home in Rajbari to share the joy of Eid with my family members.  I have reached Manikganj by going from rickshaw to van to different vehicles. That’s how I plan on going back home,” said Jamal Uddin, a private jobholder.

“There is no way to stay in Dhaka. The company has stopped providing remuneration since the shutdown was announced and we did not get any Eid bonus,” he said, adding that he is leaving Dhaka as he is unable to maintain the living cost here.

People are breaking such social distance and health guidelines everywhere, including in streets, shopping malls, kitchen markets and even banks and other business establishments fearing more spread of the coronavirus.

People were also seen gathering in front of the shops without maintaining the required distance of 1 metre or so thought to be safe for preventing the transmission of Covid-19.

Crowds of home-bound people and vehicles were also seen moving on the city streets.

However, no type of public transport can be used for the journey, said the DG.

Mamun came up with the remarks during a views-exchange meeting with reporters through a video conference from the RAB headquarters on the steps taken by the elite force over the Eid and coronavirus.

The RAB chief said anyone following the health guidelines can go to their villages in their personal vehicles. However, it is not possible to travel by public transport.

Several check-posts were installed on different parts of the highway so that public buses cannot ply the roads.

Ferry service closed for the last two days due to the super cyclone Amphan and the service was resumed last night.

Most police personnel enforcing the lockdown on the ground said they are following the new directive as Eid-ul-Fitr nears.

“We are letting people go to their village homes but not on public transport. Now you can guess how they’ll travel.”

“One can’t travel in a rented car as only personally-owned cars will be allowed to ply the roads,” said Gazipur Police Superintendent Md Ali.

Stringent measures have been put in place to regulate movement during the Eid-ul-Fitr holiday in a bid to prevent a further spread of the coronavirus. The government has barred officials from leaving their work stations during the lockdown. Public transports on roads, water vessels, trains and domestic flights will remain grounded.

However, vehicles transporting goods are not allowed to carry passengers, according to government orders.