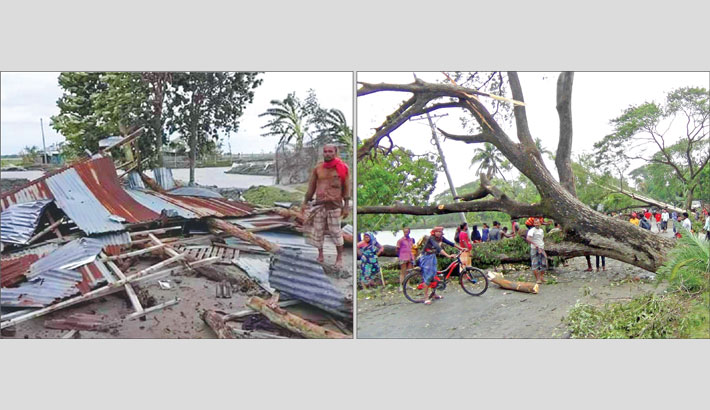 (Left) A man on Thursday stands amidst the debris of his house damaged by cyclone Amphan in Charfasson upazila of Bhola. (Right) People are working to remove a large tree that fell on a road at Alipur in Sadar upazila of Satkhira district during the cyclone. —star mail

Powerful cyclone ‘Amphan’ has caused a huge loss of valuables worth Tk 11 billion in the country, the Disaster Management and Relief Ministry said in an immediate assessment.

State minister for the ministry Enamur Rahman revealed the assessment during a briefing on the cyclone aftermath at an online press conference on Thursday.

The government has received a preliminary estimate of about Tk 11 billion loss, he added.

The Ministries of Fisheries and Livestock, Agriculture and Water Resources and the Department of Local Government calculated the loss.

The cyclone damaged 1,100km of roads, 200 bridges and culverts and 233 local government offices.

The water broken through embankments has affected 180,500 hatcheries in the coastal region. The loss will be approximately Tk 325 crore.

Meanwhile, Agriculture Minister Dr Abdur Razzak said crops on around 176,000 hectares of land have been affected by Amphan.

He came up with the estimate at a virtual press conference on Thursday.

However, boro paddy and other main crops haven’t been severely damaged by the cyclone, he said. A full report on the cyclone impact in agriculture sector will be released within 2-3 days after the collection of information, the minister also said.

The farmers affected by the cyclone will get incentives from the government, the minister said.

At least 17 people were killed in eight districts as Amphan battered the coastal areas of Bangladesh on Wednesday night, leaving a trail of destruction before weakening gradually.

After making a landfall in West Bengal of India on Wednesday afternoon, the storm also wreaked havoc overnight on life, property and crops in Bangladesh.

The fury of the storm continued from Wednesday evening to early Thursday, causing a deep tidal surge in the coastal region.

The cyclone is likely to move further in a north-northeasterly direction after a landfall and weaken gradually, the Bangladesh Meteorological Department (BMD) said in its latest bulletin.

Amphan lost its intensity and turned into a land deep depression on Thursday, the BMD said added.

The low-lying areas of the coastal districts and their offshore islands and chars were inundated by storm surges of 10-15 feet above the normal astronomical tide.

Cyclone Amphan may cause economic losses worth $1.5 billion, or nearly Tk12, 744 crore.

The National Disaster Management Council (NDMC) made the estimate of possible losses due to the extremely severe cyclone.

In Khulna, several hundred houses and fish enclosures were washed away by tidal surges triggered by the storm.

Several hundred trees were uprooted and huge crops on vast lands were damaged in the upazila.

The power connections in the upazila remained suspended since Wednesday evening.

In Natore, a number of houses and establishments were damaged as the storm also swept over the district.

The low-lying areas of the district were also inundated due to the incessant rains while a number of trees were uprooted during the storm.

Traffic movement on Bonpara-Hatikumrul highway and other roads of the district remained suspended, causing immense sufferings to people.

In Bhola, some 30 houses were damaged in Char Kukri Mukri union of Charfashion upazila while a number of fish enclosures were washed away by the storm.

Besides, the areas of Char Patila and Chal Char went under water of 4/5-feet water due to a tidal surge.

It is likely to move in a north-northeasterly direction further and weaken gradually by giving precipitation.

Under its influence, steep pressure gradient persists over the north Bay and adjoining coastal areas of Bangladesh and sea will remain rough.