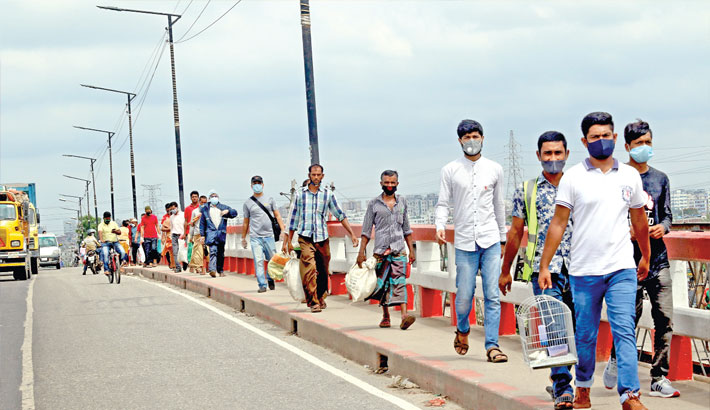 People leave the capital city on foot for their village homes ahead of Eid-ul-Fitr festival amid restrictions on movement of public transports due to the coronavirus pandemic. The photo was taken from Gabtoli area on Thursday. — MD NASIR UDDIN

A large number of people are streaming out of capital Dhaka for their homes in other parts of Bangladesh ahead of Eid al-Fitr defying government’s restrictions on movement to contain spread of COVID-19.

Bangladesh Inland Water Transport Corporation (BIWTC) suspended ferry services on Shimulia-Kathalbari river route in Munshiganj and Paturia-Daulatdia route in Manikganj to stop the people from travelling amid the outbreak.

Law enforcers forced others to go back from ferry terminals, but many others were also seen heading home crossing the river Padma in alternative ways.

People avoided the highway and walked for about two kilometres to the terminal through alternative roads in villages.

Since, there are restriction on movement of passenger buses, people are travelling by various goods-carrying trucks, private cars, micro-buses and other small vehicles, risking their lives.

On Sunday, Inspector General of Police Be-nazir Ahmed directed police to take steps so that people cannot leave or enter Dhaka ahead of Eid. He also urged people not to go to their village homes from the capital and other cities during and follow the health guidelines during the pandemic.

Police have sent back homebound people who thronged the Mawa ferry terminal area for crossing Padma to the capital on Tuesday.

Some 30 buses with a capacity of 50 seats have left for Dhaka from the terminal till the evening while 5/7 buses are waiting there to bring back the rest of the people, police said.

In the capital, people are ignoring social distancing and other health guidelines everywhere including streets, shopping malls, kitchen markets and even banks and other business establishments fearing more spread of the coronavirus.

People were also seen gathering in front of the shops without maintaining the required distance of 1 metre or so thought to be safe for preventing transmission of COVID-19.

Visiting some shopping malls including Rajdhani super markets, Islampur Market, Chawkbazar, Keraniganj, Ayesha Market,  Dhanmondi’s  Rapa Plaza, New Super Market and shops at Elephant road in the capital on Thursday found, most of the buyers shopping touching one each others.

With the opening of RMG factories, shops and eateries despite no observable downward trend in COVID-19 cases in the country, increasingly large numbers of people have been seen emerging from the lockdown situation for the last fed days casually flouting social distancing guidelines and posing serious risk of a rapid spike in the number of infections.

The number of  people and vehicles were also seen moving on the city streets Thursday. Law enforcers were seen checking the vehicles at different parts of the capital on Thursday noon.

Police said that they were trying to enforce the lockdown regulations, but people often ignored their request and instructions.

Law enforcers, however, complained that unnecessary gatherings and public movements in the morning in alleyways and in the kitchen markets were a cause for concern.