Shakib will be a big boost for us in T20 WC: Domingo 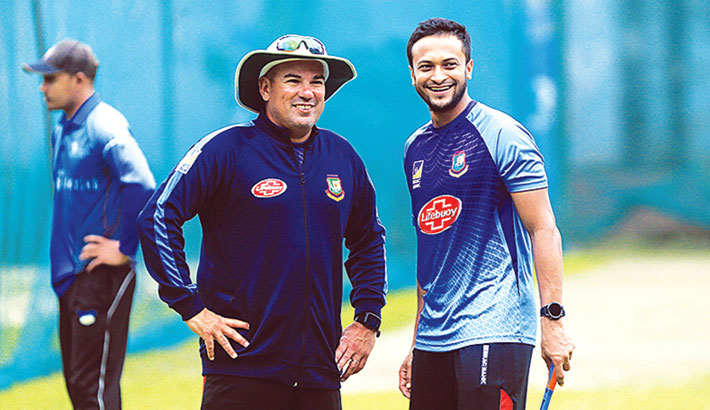 Bangladesh head coach Russell Domingo is away in South Africa during this lockdown. Domingo spoke at length with the daily sun about his plan of action that includes the future of Mashrafe Mortaza in his bigger scheme to backing young talents despite failures to have success in the long run.

daily sun: How do you rate the success against Zimbabwe? Are you disappointed that you could not keep the momentum?

Domingo: We would be disappointed if we don't beat Zimbabwe. I thought we played really good cricket in most of the games. So, I'm very pleased with the way the players maintain their standard in discipline, obviously, Zimbabwe were missing there one or two players but I thought the guys executed their skill really well. It will be great to play another series straight off the Zimbabwe series, we thought to have made headway in the white-ball cricket and we were also played a really solid Test match. So obviously we are disappointed that we weren't able to continue the momentum. But it is also good for the players to get a playoff from the long season.

daily sun: Where is Mashrafe in your plan of action?

Domingo: Look that's a long way away regarding Mashrafe in the 50 over World Cup, Mashrafe got to decide whether he's available for selection then it's up to the selectors to decide whether they going to pick him, I see a house of young fast bowlers, I think I would like to get them into the system. So, those decisions will need to make once we reassemble.

daily sun: Is there any possibility of an isolation camp?

Domingo: I don't know about an isolation camp, but there's definitely a camp needed when we get together. We can't go straight back into cricket cause we got to make sure the players are fully prepared physically and mentally. So, I don't think it's a matter of getting together and five days later playing international, it's got to be at least three-four weeks before we start to play again.

daily sun: So you are not in favour of rushing back?

Domingo: Regarding rushing back into international cricket, I think there's got to be a period where we try to get as a team just to make sure skill to be where they need to be before we start playing international cricket. I'm sure there's going to be the whole house of international cricket back to back once cricket does start again. So, making sure players are physically fit because if there are not enough spaces players easily pick up injuries if there are not enough gaps between games. Also, we need to make sure that we don't just have a squad of 13 and 14 but there's really a squad of nearly 20 players that we can pick from at any time because injuries are definitely coming after whole long of practices and after a whole long of games in or out.

daily sun: Looking forward to the Sri Lanka tour? Is it yet not postponed?

Domingo: Yeah, really looking forward to going to Sri Lanka. It's a great place to tour, great facilities, tough cricket, will be a good challenge for our team against a top Sri Lankan side.

daily sun: What is your take on T20 World Cup? If it is rescheduled there is a possibility that Shakib Al Hasan will be available?

Domingo: Obviously we have been planning for the T20 World Cup for paid of time now and whether or not that takes place I'm not sure, we will wait until next week or two to make a decision and then. It’s something we have spoken long over the last six-seven months. Something that really hopes can take place here, but if it can't well we just got to reset our goals and reset our plays and work towards when the tournament does take place again. If the T20 World Cup rescheduled to next year, obviously Shakib will be back and that will be a big boost for us.

daily sun: How do you rate Naeem Sheikh?

Domingo: He only played a couple of matches for Bangladesh. That’s the challenge here because of such an impatient cricket nation that if somebody makes mistakes, people just get throw him. And that’s something I want to change. The team wants to develop and the players are going to make mistakes. But you can’t just throw a player if he makes a mistake because of the media. So the media got a big role there. You got to make sure people understand it that guys are going to make a mistake. No one is perfect. But you don’t get rid of someone because he makes a mistake.

daily sun: So you feel backing players is important?

Domingo: Definitely. I think once a team starts winning some big series, winning away from home, the interest of Test match cricket will be greater. Age fee and Under-21 and the new platform and fixing the plans are important. Particularly with the current group of players who don’t want to sit in the situation where four or five players all retire at the same time- Shakib, Mushy, Riyad, Mashrafe, Tamim, if all retire at the same time, then that’s a big challenge. I think finding places for young players in their places of one at a time, would assist a team going forward because all five leave at the same time, big problem.

daily sun: The same goes with the Test captain as well?

Domingo: Absolutely. The same thing with Mominul. People expect him to lead and have all the experiences in the Test matches that Shakib had over ten years of captaincy. Or Mashrafe had over 10 years of captaincy. It doesn’t come with a snap. Because when they those captaincies also made mistakes. They also had been out of form, also struggled under certain conditions. You got to have patience with players. If he believes in a player, you back him up and allow him to develop.

daily sun: How do you motivate a player?

Domingo: I think there’s no substitute for hard work. So if you are bad space mentally or technically than I am sure some guys might need a break, but there are some works to do. Guys need to change the way they are trying, change the way they think, change the way they prepare, fitness, attitude- but there’s might be something that needs to take place. When you keep doing the same thing, you get the same result. So there’s was a discussion I was having with the players, to maybe look at trying other routines, other ways of training to get better performances.

daily sun: Do they accept changes?

Domingo: Look at the guys about how they go in the warm-ups and going into a game. And then a guy like Mushy’s way of training it’s unbelievable. It's the most intense most disciplined I have ever seen while some other guys like to see how it goes on the date. So they need to make some changes.

daily sun: Are you prepared to play without crowd when cricket resumes after pandemic?

Domingo: Yes, I think playing without crowds is definitely getting to be an option when we start the international cricket. It's not ideal, the crowd is such an important aspect of the game. Players love to play in front of crowds but I suppose players would rather play than not play, so, it's not perfect but we just going to deal if that is the case, I'm sure that is going to be the case for first few weeks or months of cricket.