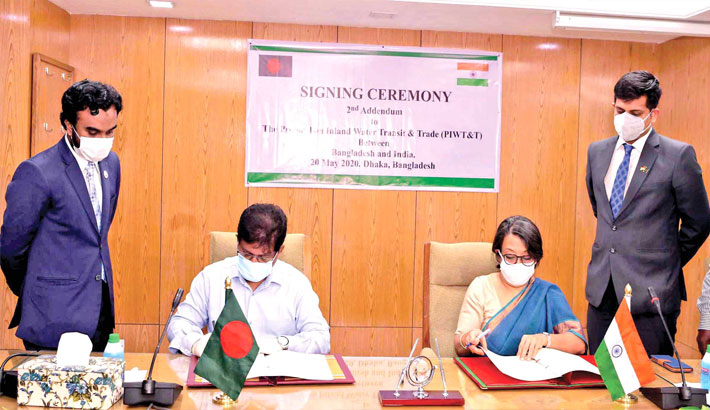 Secretary of Ministry of Shipping Mohammed Mezbah Uddin Chowdhury and Indian High Commissioner to Bangladesh Riva Ganguly Das sign the second addendum to the protocol on Inland Water Transit and Trade between the two neighbouring countries at the Bangladesh Secretariat on Wednesday. — PID photo

Bangladesh and India on Wednesday signed the second addendum to the protocol on Inland Water Transit and Trade between the two neighbouring countries.

New ports of call as well as new routes and locations were added to the protocol to further facilitate trade between Dhaka and New Delhi.

The Protocol was first signed in 1972, immediately after the independence of Bangladesh. It was last renewed in 2015 for five years with a provision of automatic renewal for a further period of five years, giving long-term assurance to various stakeholders.

The number of Indo Bangladesh Protocol (IBP) routes is being increased from 8 to 10 and new locations are also added to the existing routes.

Inclusion of Sonamura-Daudkandi stretch of Gumti river (93 km) as IBP route no. 9 & 10 in the Protocol will improve the connectivity of Tripura and adjoining states with India and Bangladesh’s economic centres and will help the hinterland of both the countries. This route shall be connecting all existing IBP routes from 1 to 8.

Under the current Protocol, there are six Ports of Call each in India and Bangladesh. They are Kolkata, Haldia, Karimganj, Pandu, Shilghat and Dhubri on Indian side and Narayanganj, Khulna, Mongla, Sirajganj, Ashuganj and Pangaon on Bangladesh side.

Inclusion of Jogigopha in India and Bahadurabad in Bangladesh as a new Port of Call will provide connectivity to Meghalaya, Assam and Bhutan. Jogigopha also becomes important since a Multimodal Logistics Park is proposed to be established there.

The new Ports of Call would enable the loading and unloading of cargo transported on the Indo Bangladesh Protocol Route and provide a stimulus to the economic development of the new locations and their hinterland.

“It is expected that these additions to the Protocol will greatly facilitate the bilateral trade, with improved reliability and cost effectiveness for the business community and the people of both the countries,” said a press release of the High Commission of India (HCI).

As a path-breaking development, both sides have agreed to introduce trade between Chilmari (Bangladesh) and Dhubri (India) through the use of shallow draft mechanised vessels, provided these are registered either under Inland Shipping Ordinance 1976 of Bangladesh or Inland Vessels Act, 1917 of India as per provisions of concerned Article of the Protocol and conform to safety requirements.

This initiative will allow export of stone chips and other Bhutanese and North East cargo to Bangladesh and easy access for the traders to the hinterland of Bangladesh, enhancing the local economy in Bangladesh and the lower Assam region of India.

Also under this Protocol, Inland vessels of both the countries can ply on the designated protocol route and dock at Ports of Call in each country, notified for loading/unloading of cargo.