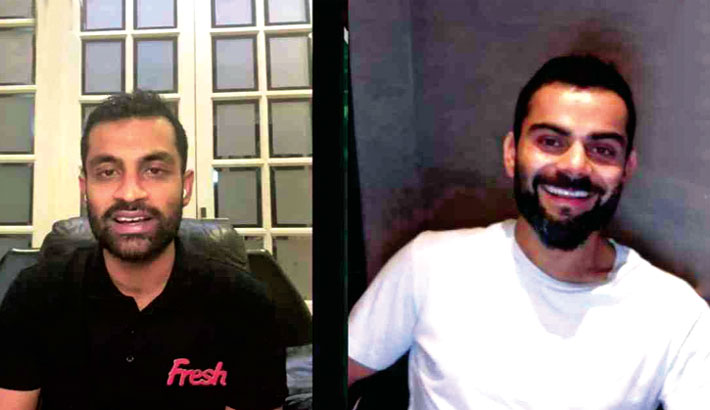 For any batsman, changing the batting stance can be a troublesome affair after playing considerable amount of cricket with his natural stance. But India skipper Virat Kohli managed to do so and that too quite successfully.

Lots of ifs and buts  goes on in the mind of a batsman when it comes to changing his batting stance with which he was successful until that point of time and it seems altering it could be a better proposition.

However, some shy away as they can’t convince themselves while others do it as they are not comfortable.

While Virat Kohli managed to take up the challenge by altering it and assuming a back and across batting stance from his earlier static one, Bangladesh ODI skipper Tamim Iqbal still has doubts about it.

In 2014 when Virat had a miserable run in England after becoming victim of James Anderson on seven occasions it occurred to him that his static stance is not paying off and he opted to go for a back and across stance.

For Tamim, the same was advised about his batting stance on a couple of occasions by his coaches but eventually those advices felt to deaf ears as he is yet to be convinced about the efficacy of the move.

During a live Facebook session with Virat on Monday, Tamim asked Kohli how he could convince him to take such a move by stating that, ‘When I saw you first your stance was something like you used to stand still and then play your shots. Now your stance is a bit different, now you do the back and forth thing whereas I stay very still.’

Tamim said that a lot of coaches have spoken to him about this, some have advised him to try back and across stance but he has never been comfortable about making the move. Tamim wanted to know why Kohli changed his batting stance.

Kohli came up with a logical explanation which suggested he took the route to make sure that he can play all-over the ground.

“I changed my stance because I wanted to score all over the ground. The static position was limiting my shot-making options,” said the 31-year-old, who goes back-and-across in his current stance.

“It works for many people, Sachin Tendulkar for instance. He had no issues because of his superior technique and hand-eye coordination. I had to tweak it to suit my game. When someone first told me it could open up my options, I thought of giving it a try. Luckily, it clicked and I immediately started executing shots which I never thought I could,” said Kohli.

Kohli averages 50-plus in all three formats, has smashed 70 international centuries and while among his contemporaries, Australian Steve Smith has an unorthodox but effective stance, standing open to the bowler and shuffling across the off-stump line, and Kohli said that batsmen have to find out what work for them.

“I always feel you should be open to changes. You can't stay stagnated, you have to keep learning,” he said.

“If you keep playing in the same manner, opposition will figure out your game. You have to be ahead of the game. So try it and drop it if it doesn't work, but any batsman should be open to positive changes,” added Kohli. “If you think that you want to try something in your game, of course do it. Try that in your practice and more importantly try that in one or two matches,” he said.

“Because I have experienced how much you have to try in practice but in a match situations where you have a chance to get out, where the situation is not in your control, you are also facing pressure from the opposition, you had to play a good innings, if you execute what you practiced then it will raise your confidence. I believe that practice gives you an assurance that you're ready but the confidence comes after performing in a match,” he said.

“The changes I have made in my batting are result of this mentality. If you try something in the match for one or two times and you are able to perform then it opens up that option. So, you get a new option in your batting. This is what I experienced myself,” he said.

“I saw that many players have such a mindset whereby they think that they always play like this. But the opposition will figure you out after sometime. So, you have to go ahead with your games,” said Kohli.

“Whatever coaches are telling you are for your own good so that the team are benefited. If anyone gives you any advice then try it out and see what happens,” he said.

Kohli added that for him going into the nets is crucial but more importantly coming out of the nets with a good feeling is something that he is more after.

“It’s a very individual thing. If you talk about Pujara (Cheteshwar Pujara), he will bat for three hours. He will bat for everyone. Everyone has their own template to boost their own confidence. But I think that if my mental setup is good and I feel good off the field, it does help my game quite a bit. When you go out for a coffee or for a walk during a tour, these things are also very important. You can't stay intense all the time. If your mental situation is good then you will go to the match with those good feelings, with confidence. Everyone knows how to play cricket. Sometimes we just make it more complicated that it actually is and bring on undue pressure on ourselves,” he said.

“I don't have any set pattern for preparation. The only set pattern I have is fitness and my diet. I think training and diet should be consistent because if your body is in the best shape and you are feeling good mentally, you don't have any problems in your body then you can go out and be at your best every time. But I think when you are not getting the confidence, not connecting the ball very well, then I want to do more batting practice, until you get that one session when you get to realise that you have done perfect batting. When I get that satisfaction then I don't stay more than seven to eight minutes in the nets. I try to practice the side-arm throw down for ten minutes and then I go away, because when you are doing good batting and you overdo it then it creates bad habits, because you start to think that you can hit every shot, so you start to hit every shot. Due to this, you lose your shape and start to get frustrated. Whatever you have gained, will just drain itself away at once. So this awareness should be in a batsman, he has to know that he had batted perfectly in this session, so getting out of the nets is also a skill, which is when do I have to get out of the nets, because that 10-15 minutes can be crucial as well,” he concluded.