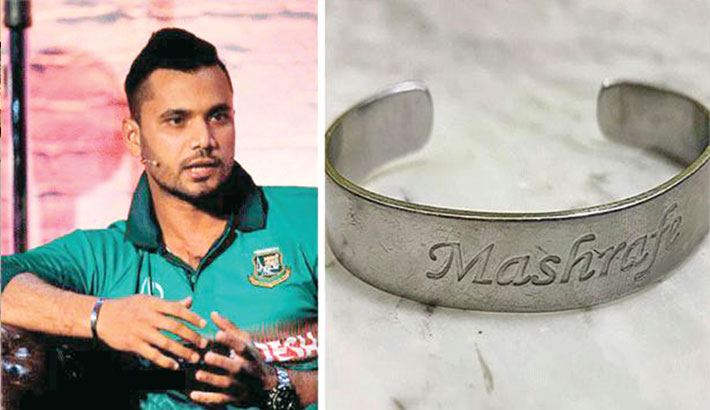 Mashrafe Mortaza’s personalised bracelet fetched a whopping Tk 42 lakh (Approx USD 50,000) in an auction but the former Bangladesh skipper won’t have to part away from his precious belonging as the highest bidder, the Association of Bangladesh Leasing and Finance Companies, has decided to gift the bracelet back to him.

Mashrafe’s bracelet has fetched the highest amount of the all the memorabilia auctioned by the Bangladeshi cricketers so far, more than doubling the previous highest Tk 20 lakh which Shakib Al Hasan got by auctioning his 2019 World Cup bat while Mushfiqur Rahim’s bat fetched at $20,000 (Tk 17 lakh approximately).

The bidding started at BDT 500,000 ($5900 approx), and the bracelet ended up fetching the highest amount among cricket memorabilia auctioned in Bangladesh in recent times.

The Association chairman Mominul Islam took part in the auction on behalf of their organisation and placed the highest bid to win the bracelet, one of the organisers of the auction.

After winning the auction, Mominul immediately said that their company wanted to gift the bracelet back to the player and at a later time organise a function to officially hand over the bracelet, which is currently with Mashrafe.

“It’s an honour, Mashrafe bhai. One can never return the respect you have brought to the country. So this is a small effort to give you the respect you truly deserve,” Mominul Islam, chairman of Bangladesh Leasing and Finance Companies Association, who had won the bid, said when returning the object to the former Bangladesh captain.

The auction, organised by Auction4Action, took place on Sunday night where Mashrafe put his precious bracelet up for grab to raise funds to help the coronavirus affected people of the country.

Mashrafe said the money would be spent for the welfare of the Covid-19 affected poor in Narail - he is a member of parliament from the district.