‘Music against Hunger’ to raise funds for needy people 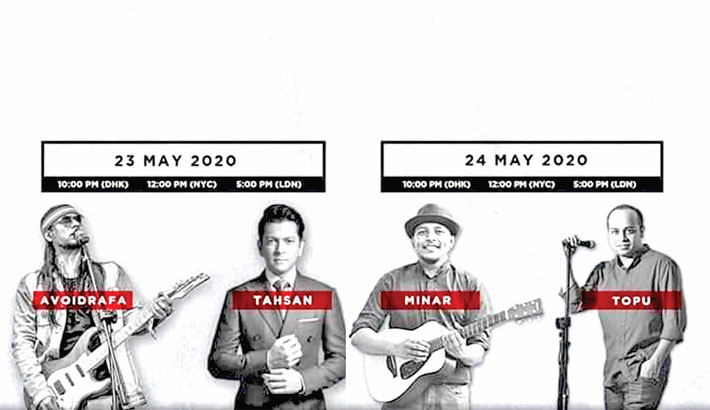 Four popular singers of the country– Tahsan Rahman Khan, Raef Al Hasan Rafa, Minar Rahman and Rashed Uddin Ahmed Topu will perform live on social media on May 23 and 24. They will participate in an online concert titled ‘Music against Hunger’  to raise funds for Public Health Foundation, Bangladesh, in order to extend a helping hand to the needy people in the country amid corona virus outbreak.

Zunaed Rabbani and Juneyna Kabir jointly will host the concert.

Supported by Closeup, the programme will stream live on Facebook and YouTube at 10 pm, on May 23 and 24 respectively. Resource Coordination Network Bangladesh (RCNB) has organised the programme.   ABC Radio and Bioscope are the streaming partners for the event.

Tahsan Rahman Khan is a popular singer-songwriter, composer, actor, teacher, and model. He learned singing at Shishu Academy and Chhayanaut.

Minar Rahman, popularly known as Minar is a singer-songwriter, composer, lyricist, writer and cartoonist. He rose to fame with the first released song ‘Shada Ronger Shopnogulo’, which was a hit in 2008. Minar does write lyrics and compose songs from his childhood and has developed his own musical style. He published his first novel ‘Rudro Ebong Ekti Grand Piano’ in Ekushey Boimela 2019.

Rashed Uddin Ahmed Topu popularly known as Topu is a musician, singer-songwriter and composer. He is the lead vocalist of ‘Yaatri’, a Bangladeshi band.  In 2004 Topu formed the band ‘Yaatri’ and began his career with a compilation album Shopnochura released in 2004. He rose to fame with the release of the singles ‘Ek Paye Nupur’.