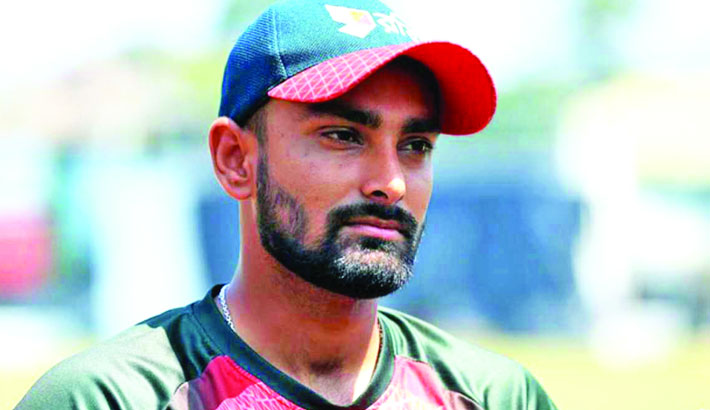 Bangladesh batsman Liton Das insisted that his batting was transformed after he followed the path shown by Bangladesh batting coach Neil McKenzie and the invaluable strategy was nothing other than ‘playing late’.

Liton in his first 17 ODIs out of 36 were able to pass double figures only on seven occasions and scored a highest innings of 41 runs.

However, Liton has been in great form since ICC World Cup 2019, where he scored an innings of 94 runs from 69 balls against West Indies staying unbeaten.

Liton performed well in the last edition of Bangladesh Premier League (BPL) after that he made the history of becoming the highest ODI run-scorer for Bangladesh by scoring 176 runs from 143 balls against Zimbabwe.

However, Liton narrated the story of his transformation in a live chat with Tamim Iqbal where Mominul Haque and Soumya Sarkar were also invited along with Taijul Islam.

In the session, the young opener said that he was thinking that he needed to change the habit of brief practice sessions and small innings and decided to bat as long as possible. This change in him came in during Tigers’ Ireland tour before the World Cup where he started to work with Neil McKenzie.

McKenzie suggested him to play late to enlarge his vision and to understand the bowler and the overall situation of the game. Going by those words seemed to have made cricket easy for Liton.

“If observe the changes in my batting, it emerged from the time of the World Cup. I like to bat for a small amount of time, which I always have been doing. I was all for minimal practice. But what I realised that this will not bring success. I have to think differently. So, when I was going to Ireland I thought that from now on I will try to use my wicket as much as I can. I worked with Neil (Neil McKenzie) for a long time,” Liton said.

“Neil told me to play late which helped my batting a lot. I never played like this. I have never done this much practice of playing late. Now I practice this a lot, of playing late, how late can I play the ball. So, I think that whenever I play late, my vision gets much better. I can see the ball very quickly and decide where I can play the ball. Cricket becomes easy for me,” he added.

He also said that he always tried to hit hard to make sure that the strike rate was high which he now feels was wrong. Now, rather than focusing on the strike rate, he is now thinking to raise his average while controlling his hitting prowess as he is also very fond of smashing boundaries.

“If I talk about BPL, then every time I targeted a certain strike rate. I envisioned a certain strike rate. There were so many days when I scored 25 runs from 5 balls and then got out trying to hit the next ball. Now I understand those things. I thought to myself that in this BPL, even if my strike rate comes down to 130-125, it will not be a problem but I have to improve my average at any cost,” he added.

“After playing one or two matches I realised that no matter how hard I try it I can’t change myself completely. I like to play shots. So, now I will try to play controlled shots. Back in the day, I would try to place the new ball on the gap rather than hitting the ball hard. As I have practiced playing late. So, I will try to play late where the chances of success are high,” said Liton.

Liton added that his 94-run innings against Sri Lanka gave him a lifeline and he feels that if he had failed it would have been a difficult for him to make a comeback.

“I was left out of the team before that Test. I joined the team after so many days and I got bowled out in the first ball after returning to the team while trying to leave the ball. This thought was burning my heart as I came to the team after performing well in the domestic. It was the same old song being played all over again,” he added.

“In my first innings when I got out while leaving the ball then I worked with Panish, our video analyst, I went to his room and watched why I got out. I always try to place my right foot in front of middle stump and my left leg in front of leg stump while batting in domestic cricket. But in that match, my right leg was in front of leg stump and the left leg was outside of the leg which was why I thought that the ball will just fly past me. So, I saw that and on the next day I try to do the same thing I try to do in domestic cricket. I thought that I had to do something. I tried to enjoy my batting. If I hit a duck it would be same but if I score big then I might have something,” he said adding that he loves to bat with Mominul Haque as he is well guided by the Test skipper.

“I find it exciting to bat with with Shourav Bhai (Mominul Haque), because he talks after every ball. He would say that Liton don't do this or that. I also try to talk with Shourav Bhai. So, I like this communication while batting because I feel that while on the wicket only the other batsman on the crease is my friend. So, if that communication goes well then many things which I don't understand, the non-striker help me understand those. Shourav Bhai helped me a lot on that day. Because whenever I batted with Shourav Bhai we always talk and rotate the strike, so, those things helped me a lot mentally and I tried to play as long as I can,” he concluded.