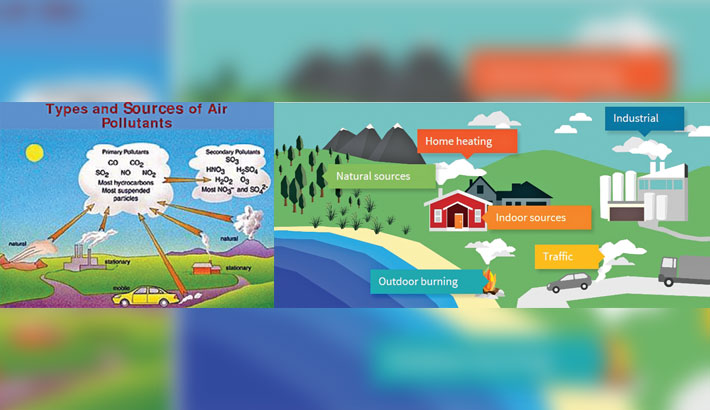 The three most important components of the environment are soil, water and air. Healthy environment is essential for the survival of all people, plants and organisms. The environment gives us the strength to live healthily. One of the widely discussed issues of the present time is air pollution which has been increasing at various rates in different places including the capital Dhaka.

Recently, the University of British Columbia's Health Effect Institute and Institute for Health Metrics and Evaluation 2019 published a report on global air pollution risk. According to the report, Bangladesh is one of the five countries where hundreds of people live in polluted air. And Bangladesh is fifth in the world in terms of air pollution deaths. International agencies have repeatedly warned about air pollution in Dhaka.

Another agency’s survey says that about 70 million people can die prematurely this year due to the effects of air pollution. At the same time, pollution will have a big impact on the economy. The rate of urbanisation and industrialization has increased in all the regions of the world. As a result, environmental pollution has increased nonparametrically.

When the particles and small molecules of various substances in the air are mixed in greater proportions, we call it air pollution. Industries, vehicles, population growth and urbanisation are some of the major causes of air pollution. However, the two major components of air pollution are industrial waste and vehicle smoke.

Textile and tannery factories in different locations, including Dhaka, regularly throw out hydrogen sulphide, ammonia, chlorine, carbon dioxide, carbon monoxide, sulfur dioxide, chlorofluoro carbon and other types of odorless chemicals. These pollutants cause headaches and other health problems. Due to the high rate of urbanisation, number of vehicles in the city is increasing, which is causing more pollution.

According to a study by the Department of Environment, brick kiln is responsible for 58 per cent air pollution in Dhaka City, Dust and Soil Dust 18 per cent, Vehicles 10 per cent, Biomass Burning 8 per cent and other sources 6 per cent. On average, a healthy normal person inhales 2,00,000 liters of air. According to the American Heart Association, breathing in polluted air can result in various cardiovascular diseases.

Air pollution is also caused by various factors like garbage dumps and animal carcasses dumps. Furthermore, the use of oil and lead gas as fuel in mechanical vehicles, is responsible for air pollution. The atmosphere is polluted when trees are cut down and forest is on fire.

Children suffer the most due to air pollution. The presence of excess lead in the air disrupts children's mental growth. About 50tons of lead is emitted every year in Dhaka city. Increased lead contamination destroys kidney function, causes high blood pressure and also damages the central nervous system. The presence of excess lead in children's blood can ruin their brain and kidneys.

About 33 million people die every year around the world due to air pollution, 75 per cent of these deaths are from a heart attack or stroke and the remaining 25per cent are from lung disease. About 75 per cent of all deaths occurred in the continent of Asia, where pollution levels are alarming - especially in China and India.

But some recent studies have reinforced the fact that polluted air can harm us in more ways. Air pollution also aggravates psychological problems. It is seen that the higher the air pollution, the greater the incidence of human depression, instability and other negative emotions.

Researchers say, air pollution is also responsible for 5-7 per cent of heart attacks. The lungs are damaged by polluted air, which can lead to cancer causing people to die. Acute air pollution may have a correlation with reduced human intelligence. The United States and China have jointly conducted these studies in China.

Air pollution has a significant correlation with increased risk of diabetes, according to a new US study. Air pollution destroys not only health, but also the environment and resources. The ozone layer becomes thinner in the atmosphere, affecting climate and also causing global climate change.

To get rid of air pollution, we need to plant more trees, build environmentally friendly brick fields, vehicles and factories, ban the use of energy that can spread harmful material in the air, reduce harmful chemical and dust in the roads. The dead bodies of the animals and garbage should be dumped in the ground, use masks to move outdoors, complete road construction or repair work at the fastest time, stop driving expired vehicles, improve waste management, city waste or agricultural waste should be monitored - not burned openly, enforce the existing laws properly, etc.

Above all, the Department of Environment should take effective measures to ensure proper enforcement and implementation of the Environmental Protection Act to prevent environmental pollution.