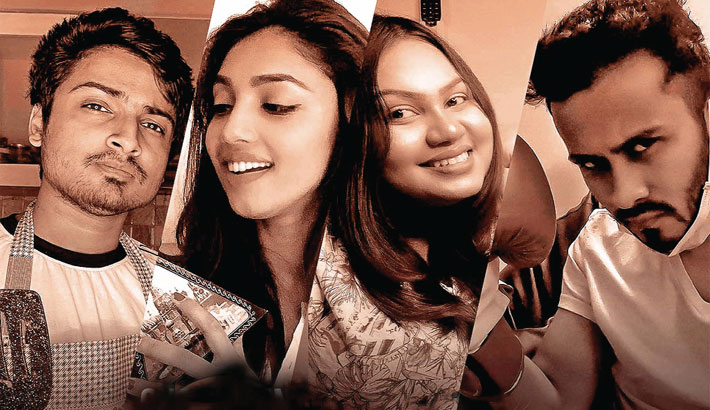 Digital streaming platform Bongo BD has launched a brand new show titled ‘Quarantine and Chill’ recently. The show is being aired on Bongo BD from March 31.

The show features four well known Bangladeshi influencers, Shouvik Ahmed, Ridy Sheikh, Magic Razik and Urmi Rahman Mishti. The show is designed for people at home who are looking for an opportunity to binge watch content from their favourite influencers while they are in quarantine.

Shouvik Ahmed is a Youtuber, singer, dancer and famous for his parody songs on his channel ‘Gaan Friends’. Ridy Sheikh is a dancer and choreographer who is known for promoting Bangladeshi culture in performances throughout Russia and Europe. She is also known for appearing as a contestant on the series Dance Plus 3 and having participated in several dance competitions in Bangladesh.

Magic Razik is a magician from Chattogram He is well known for his roving magic during special events, and most recently his magic performance has graced the stage of ‘Ityadi’. Urmi Rahman Mishti is a plus size model, former member of Daekho TV, and currently working as a content producer in Bongo BD.

These four influencers will be vlogging every day of their life for two weeks, showing viewers what they are doing during quarantine. This is relatable content for fellow Bangladeshis who are now also in quarantine. Each episode will feature different topics such as health tips, how to maintain a love life during quarantine, cooking, hobbies etc. They will provide information on what people can do during this quarantine, instead of feeling negative at home.

People can watch these free episodes on www.bongobd.com or by downloading the BongoBD app.