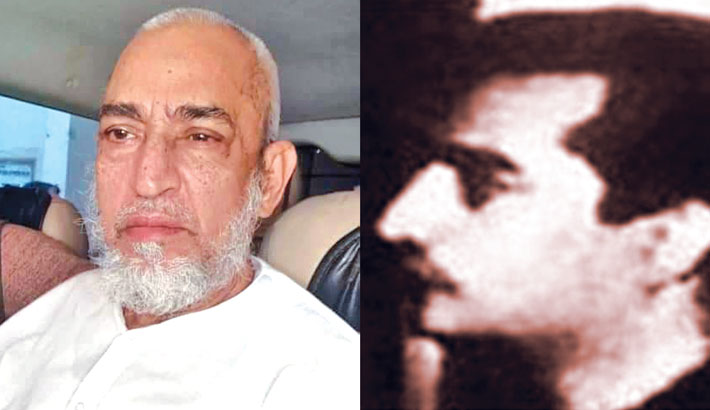 Dismissed army captain Abdul Majed, one of the six absconding death-row convicts in the Bangabandhu killing case, was sent to jail after police arrested him from Gabtoli area in the capital on Tuesday.

Chief Metropolitan Magistrate of Dhaka AM Zulfikar Hayat passed the order when Counter Terrorism and Transnational Crime (CTTC) unit under Dhaka Metropolitan Police (DMP) produced him before the court amid tight security.

No lawyer appeared to defend Abdul Majed when Sub-Inspector Anisur Rahman prayed for detaining him in jail as he was shown arrested in the Bangabandhu murder case.

Witnesses said Majed appeared in the court wearing white punjabi and pants. He was handcuffed with a bulletproof police jacket and a helmet.

Majed was brought to the court at around 12.15 pm. Later, Magistrate A M Zulfikar Hayat passed the order at 12.55 pm asking the police to send him to jail, witnesses added.

“The stipulated time for appeal against death penalty expired long ago. Majed can now just seek Presidential mercy unless the Supreme Court decides to consider any plea on his part,” a Supreme Court lawyer said.

Inspector Zahurul Haque of CTTC unit filed a report in court regarding the arrest of Majed. According to the report, a man (Majed) was traveling suspiciously in a rickshaw at Gabtoli bus stand area in Dhaka last night. He was questioned and his words seem inconsistent.

In the face of questioning, he confessed that his name is Majed. He is the self-confessed killer and death-row convicted murderer of Bangabandhu. Grilled further, Majed also admitted that he had been hiding in several countries, including India, to avoid arrest.

In a video message, Home Minister Asaduzzaman Khan said “Our detectives had all information regarding him. His wife is Saleha Begum and he used to live at house 10A, road 1, Cantonment Residential Area.”

“On August 15, 1975, during the assassination of Bangabandhu, Majed, Noor and Risaldar Moslehuddin along with others were present there when he was a lieutenant.”

“Abdul Majed was not only involved in the killing of Bangabandhu but also in the killings of four national leaders inside jail. He later worked at Bangabhaban and other places under Ziaur Rahman,” the minister said.

“We hope that we will be able to execute the verdict as per the court’s order…I think it is a best gift for the people during Mujib Borsho,” he said.

The minister said the BNP government, led by Ziaur Rahman, ensured that these criminals would not face any punishment by enacting the indemnity bill.

Majed went into hiding before the Awami League government came to power in 1996 and detectives had been working to track him down since then.

The Supreme Court on November 19, 2009, upheld the death sentences of Abdul Majed and 11 other self-confessed killers of Bangabandhu. Of them, five were executed on January 27, 2010.

The trial process began in 1996 when an indemnity law was scrapped as it was protecting the assassins.

To locate and bring them back, a taskforce comprising of ministers and high officials of the foreign, law, and home ministries was formed in 2010. Rashed was traced in the US and Noor in Canada.

Majed is from Batamara village at Borhanuddin upazila of Bhola district. His properties in his village have already been confiscated by the district administration.

People of Borhanuddin expressed their satisfaction on his arrest on social media as they cannot come out of their homes due to coronavirus.