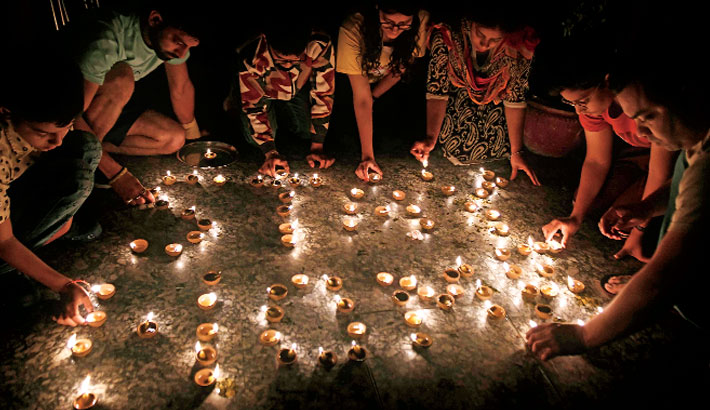 Residents light diya or oil lamps forming the words “Stay Home” outside their home to observe a nine-minute vigil called by India’s Prime Minister in a show of unity and solidarity in the fight against the coronavirus pandemic in Amritsar on Sunday. – AFP PHOTO

NEW DELHI: Indians have turned off their lights for a nationwide candle-lit vigil, heeding a call for unity as the country battles coronavirus, reports BBC.

He urged them to “challenge the darkness” of Covid-19 by lighting candles and lamps.

Millions responded, lighting up the night sky in a show of unity.

“Salute to the light of the lamp which brings auspiciousness, health and prosperity, which destroys negative feelings,” Modi tweeted at the time of the vigil.

But critics have dismissed the event as a stunt, arguing it distracted from the health and economic crisis caused by the coronavirus pandemic.

There have been more than 3,500 confirmed infections and around 100 deaths from Covid-19 in India, the latest figures from Johns Hopkins University say.

The true figures, however, are thought to be far higher. India has one of the lowest testing rates in the world, although efforts are under way to ramp up capacity.

There are fears that a major outbreak in the country - one of the world’s most densely populated - could result in a humanitarian catastrophe.

People are banned from leaving their homes under the lockdown measures. All non-essential businesses have been closed and almost all public gatherings are banned.

But the shutdown sparked an exodus from major cities such as Delhi, forcing thousands of migrant labourers to walk hundreds of kilometres to their native villages.

Last week, Modi apologised for the impact of the strict stay-at-home measures, saying there was “no other way” to stop the spread of the virus.

The PM said the restrictions would remain in place for 21 days, but officials have warned that the lockdown could be extended in parts of the country.