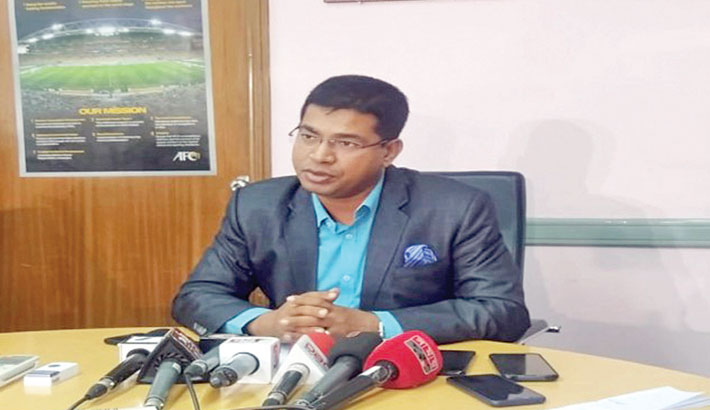 Bangladesh Football Federation (BFF) will not take any responsibility of Bangladesh Premier League’s foreign recruits’ pay at this moment as they are seeking FIFA guideline on this issue, said BFF General Secretary Abu Nayeem Shohag.

“Though the clubs asked for a common solution, till now we could not reach any hard and fast decision regarding what (BPL) clubs should do about the players' contracts. We are expecting a guideline from FIFA on this issue. Otherwise, clubs and players will have to find out a mutual solution,” he told daily sun over the phone on Sunday.

Some BPL clubs including Dhaka Abahani and Arambagh Krira Sangha want to release their foreign players before resuming league as they are facing hardships to pay their foreign recruits as per contracts. Those clubs requested the professional football league committee to run the rest of the league without foreign players.

“We have to wait for some more time to see which way the situation heads then we will make a decision. If BFF House can open after the countrywide lockdown ends, only then can we make a decision after discussing with club representatives. The decision can be anything depending on the situation. And in the meantime, we have to see what instructions we get from FIFA, AFC and what the club authorities are thinking. We will try to find out a comprehensive solution,” the BFF General Secretary said.

While asking about their crisis, Shohag said, “BFF is an event-based organisation but all events have been suspended due to coronavirus and that’s the biggest crisis for us. Now, we have to wait patiently until the situation returns to normal. We may face bigger hurdles after overcoming the current situation and in that case, we will have to follow FIFA's instructions as FIFA is the ultimate governing body of world football.”

“If all events and activities would have gone on as planned, we might have earned money from sponsorships and TV broadcasting right holders. Managing sponsorships and TV broadcasting right holders are a tough job even when business runs as usual, so we may face an odd situation after overcoming the current situation. FIFA is aware about the crisis of all its member associations. So, we do not want to ask any support. If every member association would ask individually, it may create problems. FIFA and AFC are working on finding out a solution for its member associations. FIFA has already formed a task force. They will come forward,” he concluded.

Meanwhile, BFF Senior Vice-President Abdus Salam Murshedy said that they are going to send a formal letter to FIFA as soon as possible regarding the confusion with foreign players’ pay.

“We are with the clubs. We are going to send a formal letter to FIFA as soon as possible. We will include our crisis and demands in that letter including the foreign players’ contracts. Our clubs are not like European clubs. We have to take some effective measurers to keep our clubs alive,” said Murshedy who is also BFF Professional Football League Committee Chairman.