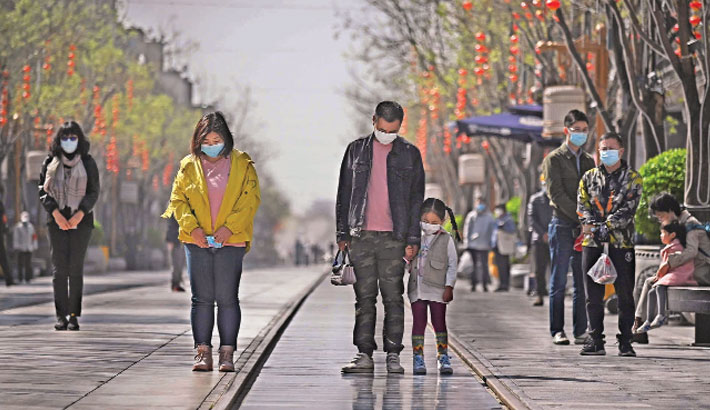 BEIJING: China has mourned the victims of the coronavirus outbreak by observing a three-minute silence, bringing the nation to a halt, reports BBC.

A day of remembrance was declared in China on Saturday to honour the more than 3,300 people who died of Covid-19.

At 10:00 local time (03:00 GMT), people stood still nationwide for three minutes in tribute to the dead.

Cars, trains and ships then sounded their horns, air raid sirens rang as flags were flown at half-mast.

The first cases of coronavirus were detected in the Chinese city of Wuhan in Hubei province late last year.

Since then, the virus has swept the globe, infecting more than one million people and killing nearly 60,000 in 181 countries.

In Wuhan, the epicentre of China’s outbreak, all traffic lights in urban areas were turned red at 10:00, ceasing traffic for three minutes.

China’s government said the event was a chance to pay respects to “martyrs”, a reference to the 14 medical workers who died battling the virus.

They include Li Wenliang, a doctor in Wuhan who died of Covid-19 after being reprimanded by the authorities for attempting to warn others about the disease.

“I feel a lot of sorrow about our colleagues and patients who died,” a Chinese nurse who treated coronavirus patients told AFP news agency. “I hope they can rest well in heaven.”

Saturday’s commemorations coincide with the annual Qingming festival, when millions of Chinese families pay respects to their ancestors.

China first informed the World Health Organization (WHO) about cases of pneumonia with unknown causes on 31 December last year.

By 18 January, the confirmed number of cases had risen to around 60 - but experts estimated the real figure was closer to 1,700.

Just two days later, as millions of people prepared to travel for the lunar new year, the number of cases more than tripled to more than 200 and the virus was detected in Beijing, Shanghai and Shenzhen.

From that point, the virus began to spread rapidly in Asia and then Europe, eventually reaching every corner of the globe.

In the past few weeks, China has started to ease travel and social-distancing restrictions, believing it has brought the health emergency under control.

On Saturday, China reported 19 new confirmed cases of coronavirus, down from 31 a day earlier. China’s health commission said 18 of those cases involved travellers arriving from abroad.

As it battles to control cases coming from abroad, China temporarily banned all foreign visitors, even if they have visas or residence permits.

As the coronavirus crisis in China abates, the rest of the world remains firmly in the grip of the disease.

In the US, now the global epicentre of the outbreak, the number of deaths from the disease jumped to 7,152 on Friday, according to data collated by Johns Hopkins University.

Meanwhile, deaths continue to climb in Italy and Spain, the second and third worst-affected countries in the world.

However, there was a glimmer of hope for both countries, as the downward trend in the rate of new cases continued.