Coronavirus: Celebrities extend their hand to the poor 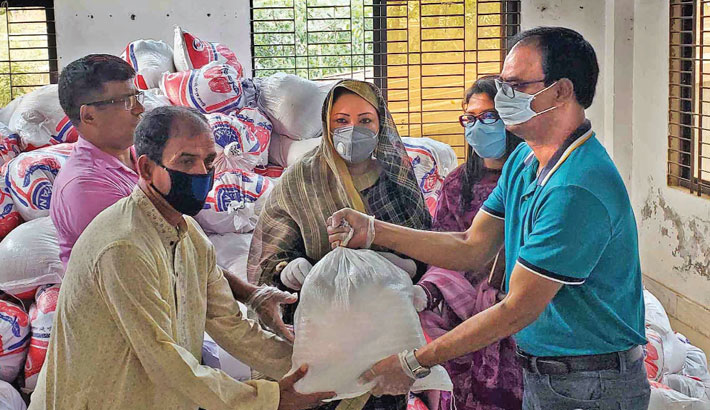 Due to coronavirus outbreak most of the people of the world as well Bangladesh have kept themselves in home or self-quarantine. Celebrities in Bangladesh are also staying home and encourage people to do it. To create awareness among people, celebrities have also taken to social media with a variety of posts.

Amid the tough situation, some celebrities have extended their hand to the low-income people. The artistes are supporting those people who have no proper access to food or sanitation products during the lockdown.

Popular folk singer of the country Momotaz Begom distributed food items among the poor people at Singair upazila of Manikganj on Friday.

Actor Ananta Jalil provided 500 packets of rations among the daily wage artistes and production crew at BFDC in the capital last week.

Popular actress Apu Biswas distributed 2,000 masks and gloves to 100 daily-wage earners along with food for five days at the gate of the Bashundhara residential area in the capital on March 28.

Actress Sadika Parvin Popy also has distributed over 3,500 masks and hand sanitisers to the people in need.

Actor Saimon Sadik, along with some friends, provided 400 packets of rations to daily-wage earners in Rampura, Hatirjheel, Dhanmondi, and Karwan Bazar, among other parts of the capital.

Ashraful Alom—better known as Hero Alom has also distributed food items to 500 families of daily-wage earners in villages within the Bogra, Sherpur, Kahalu, and Nandigram areas.

Besides, many artistes have donated money to the various social organisation to distribute.