Containers pile up at Ctg Port 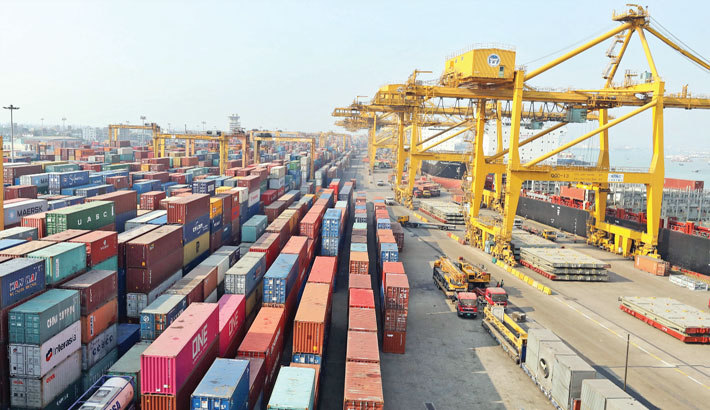 CHATTOGRAM: Goods-laden containers are piling up at the country’s premier seaport under the influence of the ‘lockdown’ announced aiming at arresting the possible spread of the coronavirus in the country.

The situation may take worse turn as the increasing number of containers will overflow the port yards, if the situation continues.

Concerned sources feared that operational activities of the port will be hampered to a great extent if it lacks sufficient space for accommodating the additional containers.

The sources in the Chattogram Port Authority (CPA) held keeping the industries and offices of different departments provides clearance for goods like perishable ones closed, insufficient number of goods-laden vehicles and reluctance of plying vehicles by the transport workers responsible for the situation.

According to statistics from the CPA, a total of 44,996 Twenty-foot Equivalent Units (TEUs) of containers were lying at the port yard till 8:00am on Thursday against the total stocking capacity of 49,018 TEU containers.

A total of 1,873 TEUs containers were delivered from the port within the span of time against over 3,500 to 4,500 containers of the regular period, said sources.

The number of delivered containers in the previous 24-hours was 1,708, they said.

“We requested the different business organisation including the Chattogram Chamber, BGMEA and BKMEA to take delivery of the containers as early as possible,” he said.

Efforts are also kept on to make the free spaces at the port yard and terminals operational for keeping the additional containers, said the secretary.

Besides, plans are also taken to keep some containers at the overflow yard to lessen the pressure, Faruk added.

Bangladesh Freight Forwarders Association Director Khairul Alam Sujan said lack of sufficient vehicles and excessive fare are main causes behind slowing down of the goods delivery from the port.

He informed that most of the importers and exporters kept their factories and warehouses shut following the general holidays announced by the government since March 26.

The acute crisis of labourers at the container depots also contributed to the situation, he said.

Many of the foreign buyers stopped taking the export goods while many cancelled orders creating an uncertainty in the business sector, said Sujan.

Steps will have to be taken to ease availability of goods-laden vehicles at a reasonable fare, he observed adding that the information should be spread that goods delivery from the port and activities at the Customs House are going on.

Besides, acute crisis of goods-laden vehicles, transport workers and labourers are also hampering delivery of the containers, he said.

Mahbubul also urged the government to help the businesspeople through providing facilities in payment of the utility bills, loan instalments and different charges for import and export to tackle the situation.

“Everybody will have to keep patience as it is a global crisis and the crisis will have to be tackled with coordinated efforts,” said the business leader.