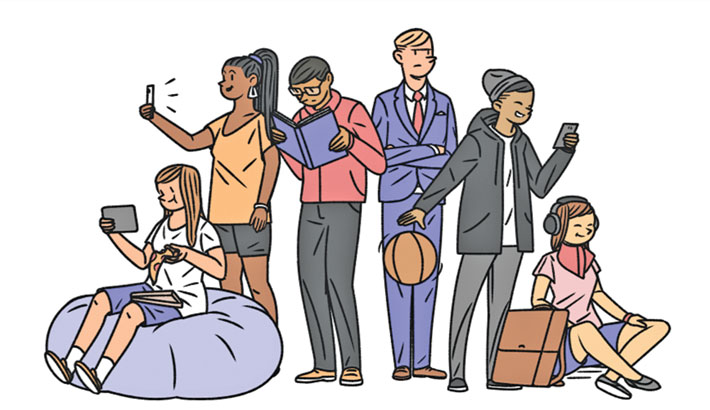 Generation Y, a line of people who remain in a constant conflict; who feel a strong pull towards old values and at the same time cherish a deep fascination for the new ones. They struggle hard to fight the transition of time.

According to early sociologist Karl Mannheim, differences in generations are mostly noticed in the way how a young transforms into an adult. The childhood of generation Y or Gen Y is mainly designed on the sketch of their previous generation trend. When they look back, their childhood appears with hundreds of sweet memories knitted with some colorful threads namely, parents, siblings, cousins, relatives, neighbours and so on. Their weekends were not passed in simply looking at cellphone screens or tabs or hangouts, rather they spent lovely moments by watching movies with their family members, with near and dear ones. Their socialisation is pretty much the same as that of their predecessors.

Their vacation or any kind of celebration was incomplete without visiting their village homes and thus their roots could hold a sway over them. On weekends they used to play with cousins by building home within home with sofa cushions but no wall was there among them. They maintained an exquisite bond. Their cousins were not merely some pictures on facebook or some rarely heard voices on telephone, rather their cousins owned a special space in their hearts. As a representative of 90s, I would like to share some distinct childhood memories of mine. When I was a school goer, we friends used to write letters to each other when there was any fight going on. We used to compose poems, rhymes, lyrics with our raw knowledge and let our friends criticise it. We were not only engaged in study but also in acquiring knowledge in other fields, like singing, dancing, recitation and so on. We used to read Thakumar Jhuli, Chacha Chowdhury, Mina-Raju, Tin Goyenda, Tagore’s short stories, Sarat Chandra Chattopadhyay’s novels and so forth, which framed the basement of our life.

The childhood days of Gen Y ended with lullaby sung by their mothers and also by their grandmothers. Animations did not replace lullaby till then. We used to listen to the songs of Tagore, Kazi Nazrul Islam, Farida Parveen, Chitra Singh, Srikanto Acharya, Lata  Mangeshkar, etc. The spell of these songs were so intensely imprinted on our souls that the transition of time could not fade it. Besides these, we also used to listen to the songs of Ayub Bachchu, James, Khalid, Habib Wahid, Tahsan, Tapu, etc. We are, in a sense, a mixed generation.

Gen Y were born in such an age when time fluttered its wings and a confusion was there about whether to cling to old values or to accept new ones. Due to internet access, Gen Y love to send their feelings to their loved ones through the wings of text messages, messenger or WhatsApp but the appeal of letters still attracts them. They can behold each other through video chat but they are also poised to see their loved ones after long wait. They wear torn jeans, tops, T shirts, adopt latest trends but Bengali culture has not lost its hold over their souls. They love to enhance their Bengali beauty with dresses like sharee, payjama, panjabi. They dye their hair yellow, they wear ‘gajra’, strings of ‘beli’ in their hair buns alongside. Yes, they are modern but they can spend long hours in simply looking into the eyes of their special ones. They value their relationships; they still worship true love, the one that is portrayed in our Bengali classical literature and in classical songs.

Gen Y grasp the changes in language in no time; they use ‘texting lingo’ every now and then but they appreciate the treasure trove of their mother tongue. They have some kind of fascination for concerts but they nourish a deep yearning for evening classical music events; exhibition of paintings and photographs. They welcome the flow of modernity with an open heart but they also find an intense delight in listening to the symphony of glass bangles and anklets with which our Bengali sentiment is somehow connected. They love the latest musical instruments but the tune of flute still steals their heart.

Rini Dutta, The author is a Lecturer of the Department of English, BGC Trust University Bangladesh