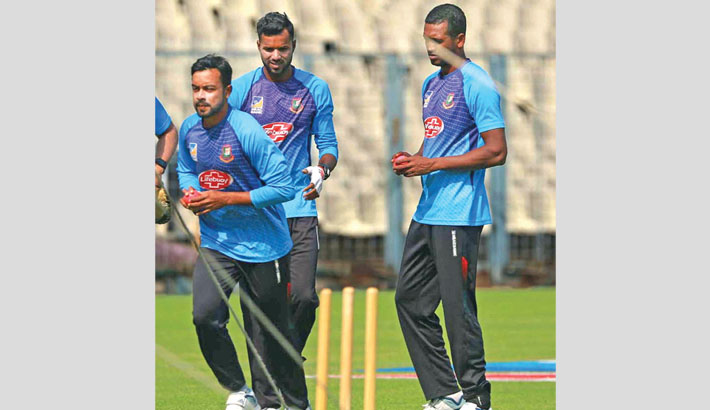 Due to coronavirus pandemic cricket is at a standstill worldwide and Bangladesh is no exception in this regard.

Cricketers are staying at home with their family and during this time they are trying to keep themselves fit though it is easier said than done.

It is certainly very hard for any player to keep himself motivated to do the work from home and the pacers will face this challenge much more than others.

Being overweight which is a real possibility for Pacers in this break, means that they will fall behind as it will have an effect in their run-up up to the delivery and eventually in the follow through. If pacers are not fit then they will have the fear of taking the hit while coming onto bowl as well as the risks of getting injured also rises exponentially.

Bangladesh pacers are trying to remain fit despite the nationwide lockdown due to coronavirus. Many have turned their rooftops into makeshift gymnasium.

Many are using the nearby fields for running. It also becomes tough for the pacers to maintain the prescribed diet during their stay at home.

Then again the pacers are resisting their urges and continuing with their given diet. Everyone is determined to keep themselves fit.

Left handed cutter-master Mustafizur Rahman is keeping himself fit as well as bowling regularly. He is bowling in concrete wicket for lack of access to a turf.

“Started bowling over concrete wicket. I am also doing home workouts for fitness using the band along with running exercises. I ran about two and a half kilometer in the last day. It’s tough to do anything beyond these in this situation,” said Mustafizur.

Mohammad Saifuddin recently recovered from injury. He was out of cricket for about six months before he came back with the last Zimbabwe series where he played ODIs and T20Is. After playing five matches in a row he is again stuck in his house due to the novel coronavirus outbreak. He is passing leisure time at home.

“Every day, I am just eating and sleeping. At afternoon, I go to the rooftop and do my core fitness workout and running,” said Saifuddin.

Saifuddin is doing more than what Bangladesh national team physio Julian Calefato have asked him to do.

“Physio asked me to do some work. Apart from that every one of us are doing what we need to do,” said Saifuddin.

The 23 year old pacer is also aware about the food habit, “As there is no match, controlling food habit is important. Trying to have as much as diet food,’’ he added.

Veteran pacer Rubel Hossain is well experienced in working on fitness from home. Instead of going to gym he is making keeping himself fit by doing some home workouts.

“Doing what I can do from home and I am working on my core fitness. Not going to gym due to the situation. I also don’t have anything else to do right now. I have to continue doing this,” said Rubel.

Fast bowling has traditionally been Bangladesh cricket’s weak link due to a lack of exposure, hardly any role models for youngsters to follow and, possibly the most prevalent, a lack of motivation on the not-so-friendly pitches and conditions that predominantly favour spinners.

There has always been a shortage of a consistent fast bowler in Bangladesh with Mashrafe Mortaza probably the first and still the only pacer who has made a mark in the international circuit over a long period.

The former Bangladesh ODI captain is the highest wicket-taking pacer in the 50-over format with 269 wickets in 218 games, and Rubel Hossain is second among the pacers with 126 scalps in 101 matches.

There are other seamers namely Mohammad Saifuddin, Shafiul Islam, Al Amin Hossain and newcomers Ebadot Hossain and Hasan Mahmud in the Tigers’ fast bowling unit, none of whom have yet set the world alight.

Things have started to change in tune with the Tigers’ thought process with the selectors preparing separate fast bowling units across formats. Bangladesh played with totally different fast bowling attacks in the Test and limited-overs games against Zimbabwe.