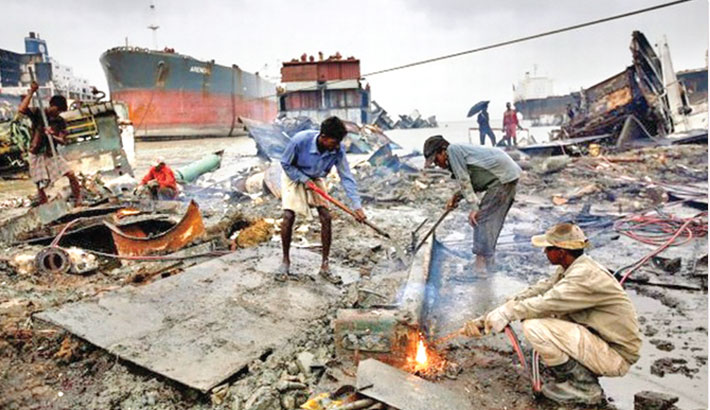 Bangladesh Finance Minister AHM Mostafa Kamal recently commented at a conference that the state of the economy is not much good. He has said, not only in Bangladesh, but at the moment the world is going through an economic downturn.  Imports and exports are not being done properly in any country. Imports and exports are declining. Meanwhile, there is mistrust in the stock market and banking sector. Even in these bad economic conditions, the ship breaking industry of Bangladesh is giving us hope.

On February 4, the NGO Shipbreaking Platform, a Belgium based organisation, has published data on ships dismantled worldwide in 2019. Bangladesh holds the top spot for the second time in the list. According to the platform, the largest number of ships in the world was broken in Bangladesh in 2019. During the year, Bangladesh imported 236 ships from international market for dismantling which is 20.41 per cent higher than 2018.

Ship breaking is a type of ship disposal process. Usually, after a few decades of their lifespan, ships are pulverised into scrap for recycling. According to YPSA (Young Power in Social Action), a non-profit organisation working for workers rights and protecting environment, around 700 ocean-going ships are taken out of service every year around the world. And Bangladesh is one of the major buyers in this sector. According to Bangladesh Shipbreakers and Recyclers Association (BSBRA), 221 ships were dismantled in 2015, 250 ships in 2016, 214 ships in 2017, 196 ships 2018 and 236 in 2019.

The role of a catastrophic cyclone lies behind the foundation of this industry. In 1960s, after a severe cyclone, the Greek ship M D Alpine became non-operational on the shores of Sitakunda, Chittagong. That non-operational Greek ship opened the door to the untapped possibilities. Sitakunda has been transformed into a business center. As a result, thousands of indigent people from different parts of the country came here seeking employment.

The shipbreaking industry of Bangladesh has captured the international recycling market by dismantling around 47.2 per cent oceangoing vessels. In 2018, India pulverised 25.6 per cent, Pakistan 21.5 per cent, Turkey 2.3 per cent and China 2 per cent.

It is estimated that there are around 120 shipbreaking yards along the coast north of Chittagong and the number of shipyards are increasing year by year. It generates a lot of jobs, and it is estimated that around 50,000 people are directly involved in this industry. Additionally, another 1,00,000 are indirectly involved in the business. Most of the workers come from the poverty-stricken northern region of Bangladesh.

A shipbroker buys a ship for around 5-10 million dollars depending on the size and quality of the ship. Around 300-500 people are typically employed for dismantling a ship. Beside that many more are employed in downstream activities for recycling of all kinds of materials from the ships. ‘Some of the recycled materials are exported; the rest are sold for reuse in Bangladesh. A lot of the materials are of high value to the local economy.

Scrapping of ships provides the country’s significant source of steel and saves substantial amount of money in foreign exchange by reducing the need to import steel materials. Currently Bangladesh has a demand for 50,000 tons of metal/steels, but she has no iron ore sources or mines. The industry is providing more than 60 per cent of the raw materials for local steel industry. It generates large sums of revenue for various government authorities.

Every year the government receives hundreds of crore taka in revenue from the industry through import duty, yard and other taxes. It provides employment for some of the poorest unskilled people who would otherwise have no employment.

It is considered a “green industry”, as everything on the ship and the ship itself is recycled, reused and resold. The scrapping of ships supplies raw materials to steel mills as well as providing furniture, paint, electrical equipment and lubricants, oil to the number of businesses that have sprouted up specifically as a result.

But these economic benefits should be considered together with the social and environmental costs. It was observed that 86.44 per cent of the labour force receives no medical facilities from the shipyard owners. Local organisations in Bangladesh estimate that 1000-2000 workers have died in the last 30 years. ‘General health statistics show that the percentage of people with disabilities in the Chittagong area are above average for the country as a whole, because many workers have lost limbs or got other disabilities from working in the shipbreaking industry.

In recent times, the shipbreaking sector has emerged as a driving force of economy in terms of GDP contribution and employment. According to Economic Times, due to the rising shipping capabilities with a slow economic activity in recent times, it can be deduced that shipbreaking activities will increase in the coming years. The government of Bangladesh has introduced new national policy and legislation in 2011 to improve the environmental and occupational health and safety standards in the shipbreaking yards. However, enforcement and compliance are almost non subsistent.

At the end I can only hope that the government of Bangladesh will give good attention to this industry, as shipbreaking yards are likely to be busy in the coming years.