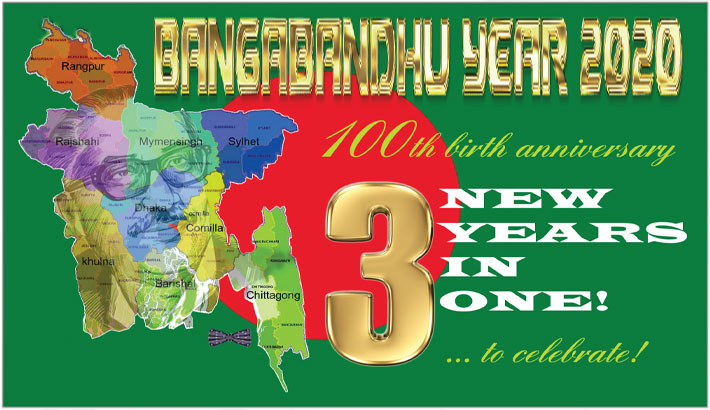 2020 will not only be remembered as the 100th birth anniversary of Bangabandhu, but also as the year in which Bangladesh celebrated not one, not two, but three New Years!

The first (January 01, 2020) has already been gone, given its usual revelry treatment.

The second is about to happen – Mujib Borsho or Bangabandhu’s birth centenary year (March 17, 2020 – March 16 2021) and the third Pohela Boishakh or Bangla Noboborsho, will follow on 14 April.

Mujib Borsho, most probably, will be the most exhilarating and exciting one of all three. It’s the one that everyone has been awaiting and eagerly looking forward to celebrating.

Never before in the history of Bangladesh has an event been given so much advance publicity. Every newspaper in the land has been running countdown clocks on their front pages. Every television broadcast has had a countdown clock obtrusively plastered across their transmissions.

Even foreigners who’ve only visited Bangladesh for a day this year have come to know that March 17 is the 100th birth anniversary of the Father of the Nation Bangabandhu Sheikh Mujibur Rahman, the dreamer and architect of Bangladesh. There’s been no respite from its media bombardment.

What exactly will happen on March 17, the culmination of the huge build-up? Right now it’s the mystery of the year. To the best of my knowledge there’s been nothing reported in the media, which I find rather strange as if the ensuing celebrations were a national secret, but I guess it won’t be long before all will be revealed.

Of all the three annual celebrations this year, it’s a foregone conclusion that Mujib Borsho will be historic, outstanding, celebrated and remembered above all. And, unlike the other two, may have the added bonus of joining the majority of Bengalis in heart, spirit, patriotism and moving the nation forward at an accelerated pace.

Traditionally, well meaning resolutions go hand-in-glove with each New Year. People resolve to continue good practices, change an undesired trait or behaviour, accomplish a personal goal, or otherwise improve their life or the lives of others.

Mujib Borsho gives those who failed to keep their 2020 New Year resolutions or promises another chance to revive and make good. If I were granted one wish in Mujib Borsho, it would have to be zero tolerance of corporal punishment in schools, madrasas and homes – in all settings – for the good of Bangladesh.

It’s impossible for Bangladesh to move forward into the future, as it ought, with the future of the nation – the children – broken in its downdraft turbulence, for future generations to pick-up and attempt to repair.

What a befitting, unique and priceless 100th birthday gift it would be to Bangabandhu if there were no corporal punishment in Bangladesh – and its youth – his children – were confidently marching towards becoming outstanding citizens and helping to fulfill his dream of a Shonar Bangla. That’s a dream that could transform into reality and, hopefully, it will!

Meanwhile, let’s join in the spirit of the occasion, revel in the unique opportunity, spread goodwill and wish our friends and loved ones a happy Mujib Borsho!

Sir Frank Peters, the writer is a former newspaper and magazine publisher and editor, an award-winning writer, a royal goodwill ambassador and humanitarian