AN EPITOME OF MUTUAL RESPECT 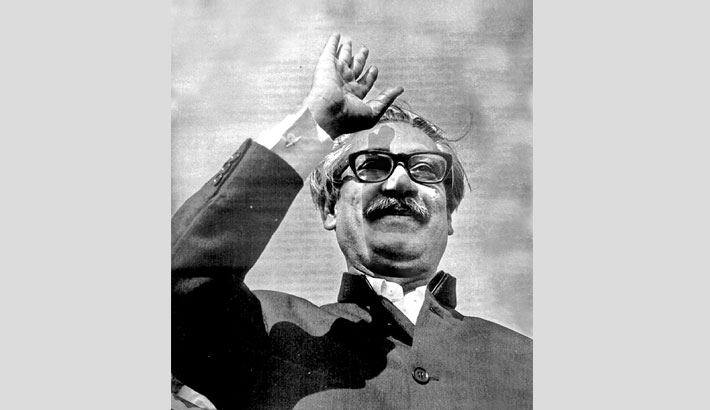 Whenever we speak of an iconic leader, usually we highlight his/her contributions to the country. We focus on how he/she has led a nation to reach its pinnacle. Thus in our narration his/her eventful life surpasses his/her personal attributes. Of course, big incidents of a leader’s life, which change the course of the destiny of a nation, are important, but the features that make a leader a great leader are no less significant as people first accept them for their political courtesy and then start following their instructions. When it comes to Bangabandhu Sheikh Mujibur Rahman, it is his outstanding qualities that transformed him into the father of our nation from a mere political activist of Tungipara. He is such a towering figure of our national history that it is really difficult to pick only one out of all his virtues which make him distinguishable from others. Yet it can be said that among all his traits his manner is something that made even his political opponents bound to revere him. Therefore, ahead of the birth centenary of ‘the greatest Bangali of all time’, we will reflect on the way he showed respect to others throughout his illustrious life. 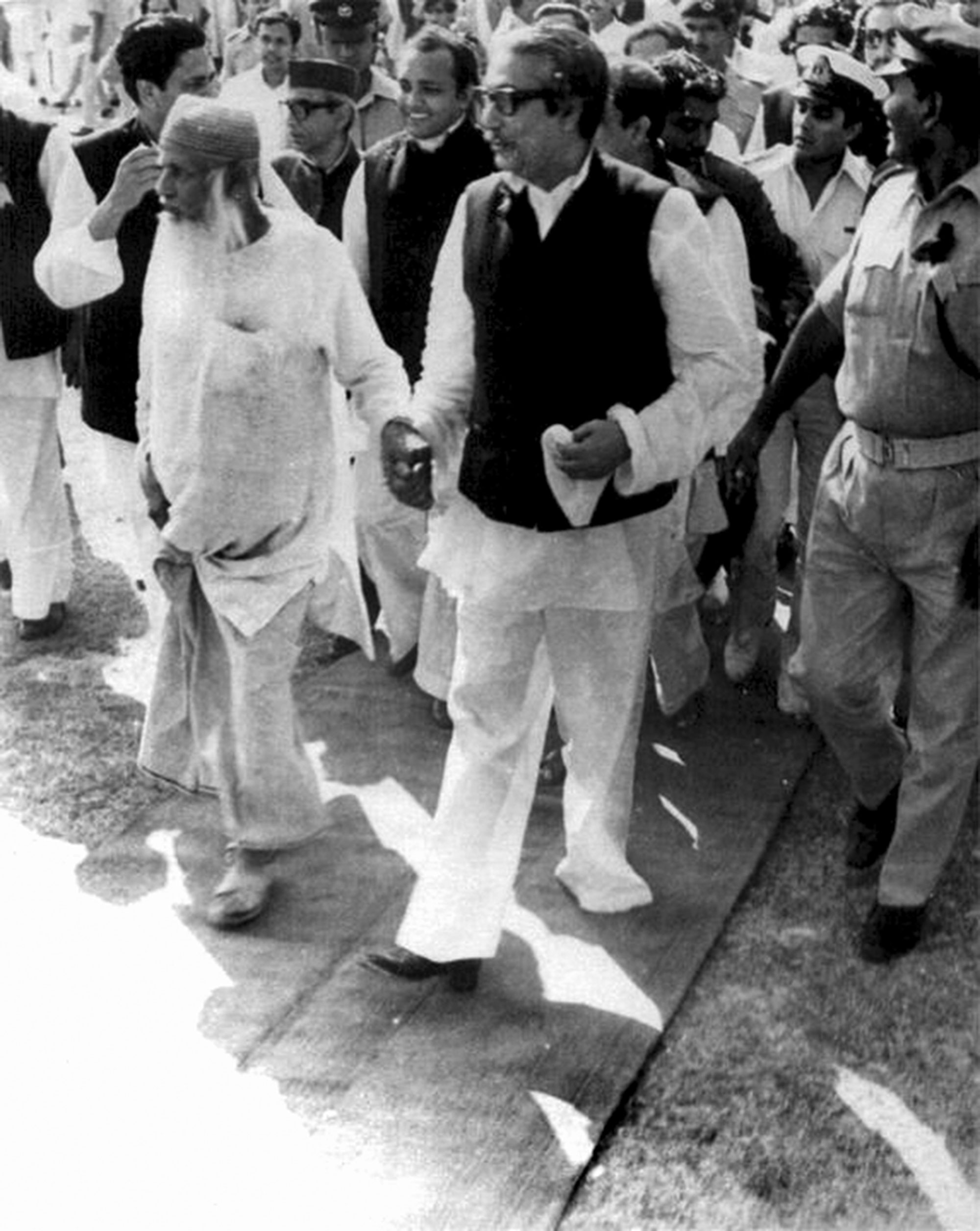 Bangabandhu’s high esteem for his political guru Huseyn Shaheed Suhrawardy is evident as he referred his name in just the second paragraph of The Unfinished Memoirs. He repeatedly stated how Suhrawardy’s leadership and affection influenced his political career. According to him, “Mr. Suhrawardy was a generous man. There was no meanness in him and he wasn’t influenced by partisan feelings or prejudices. He did not believe in cliques or coteries and did not try to work through factions. If he found someone eligible, he would trust him fully. He had tremendous self-belief. He tried to win men’s hearts through his honesty, principles, energy and efficiency.”

Sheikh Mujib talked about the deep respect the mass people of Bengal had for Sher-e-Bangla A.K. Fazlul Huq in The Unfinished Memoirs. He described how people protested when he criticised Sher-e-Bangla’s political policy in a rally. He stated that his parents asked him to never disrespect him. He developed a warm relationship with Sher-e-Bangla in the later years. While recalling his experience with Fazlul Huq as the cabinet minister of the United Front in The Unfinished Memoirs, Mujib wrote, “He had once said to some assembled journalists, ‘I’m an old tree and Mujib is a bark branching out and that’s why I am his grandpa and he is my grandson.’ I was the youngest of all the cabinet ministers. 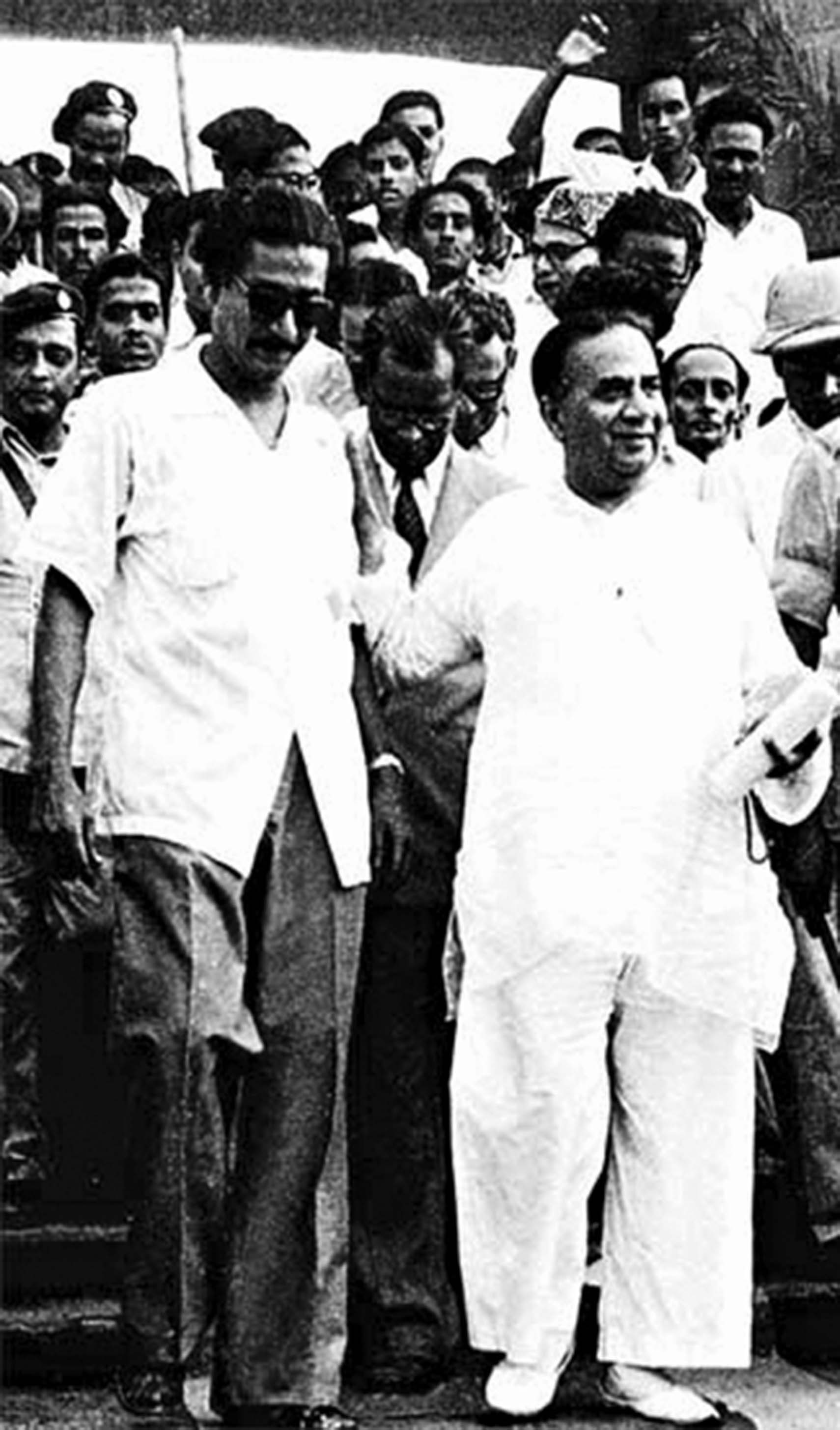 And he was the oldest member of the cabinet. I would do whatever he wanted me to do. He had a big heart and that is why I have got to respect him.”

Maulana Abdul Hamid Khan Bhasani was another major political leader for whom Sheikh Mujib had deep regards. Albeit they together worked for Awami Muslim League, gradually both of them took charge of two opposite political streams. Despite their political discord Bangabandhu never forgot his contributions. In his book Mujib Vai, renowned journalist ABM Musa stated about an incident in this regard. In independent Bangladesh when the people were struggling due to scarcity of food, Maulana Bhasani led a procession comprising the hungry people towards Bangabhaban following a rally held at Paltan Maidan. The then Home Minister M Mansur Ali received him and entertained him in his government house with different delicious foods. The next day an illustrated report titled ‘Maulana’s food luxury after leading hunger procession’ was published intentionally in the newspapers! During that time Bangabandhu was taking rest in Geneva after the completion of his gallbladder stone operation. When Bangabandhu came to know about it through Musa, he became furious. He said, “What have they got? What do they know about Maulana?” Immediately he spoke with Syed Nazrul Islam and M Mansur Ali over the telephone.

Bangabandhu admired politician Ataur Rahman Khan. They together went to China to attend a peace conference in 1952. But Khan suddenly decided to return from China due to his wife’s illness. Mujib penned about this in his book New China as I saw, “And it is needless to say about Mr. Ataur Rahman. When he left the country for China, sister-in-law was very sick. It is better to not mention it, yet it can be said that, Mr. Ataur Rahman loved his wife very much. He cannot stay without seeing her. Till the day he was in Peking, whenever he got time he spoke about sister-in-law. I often made joke regarding it, but he never reacted. All of you know that he is very good at heart.” 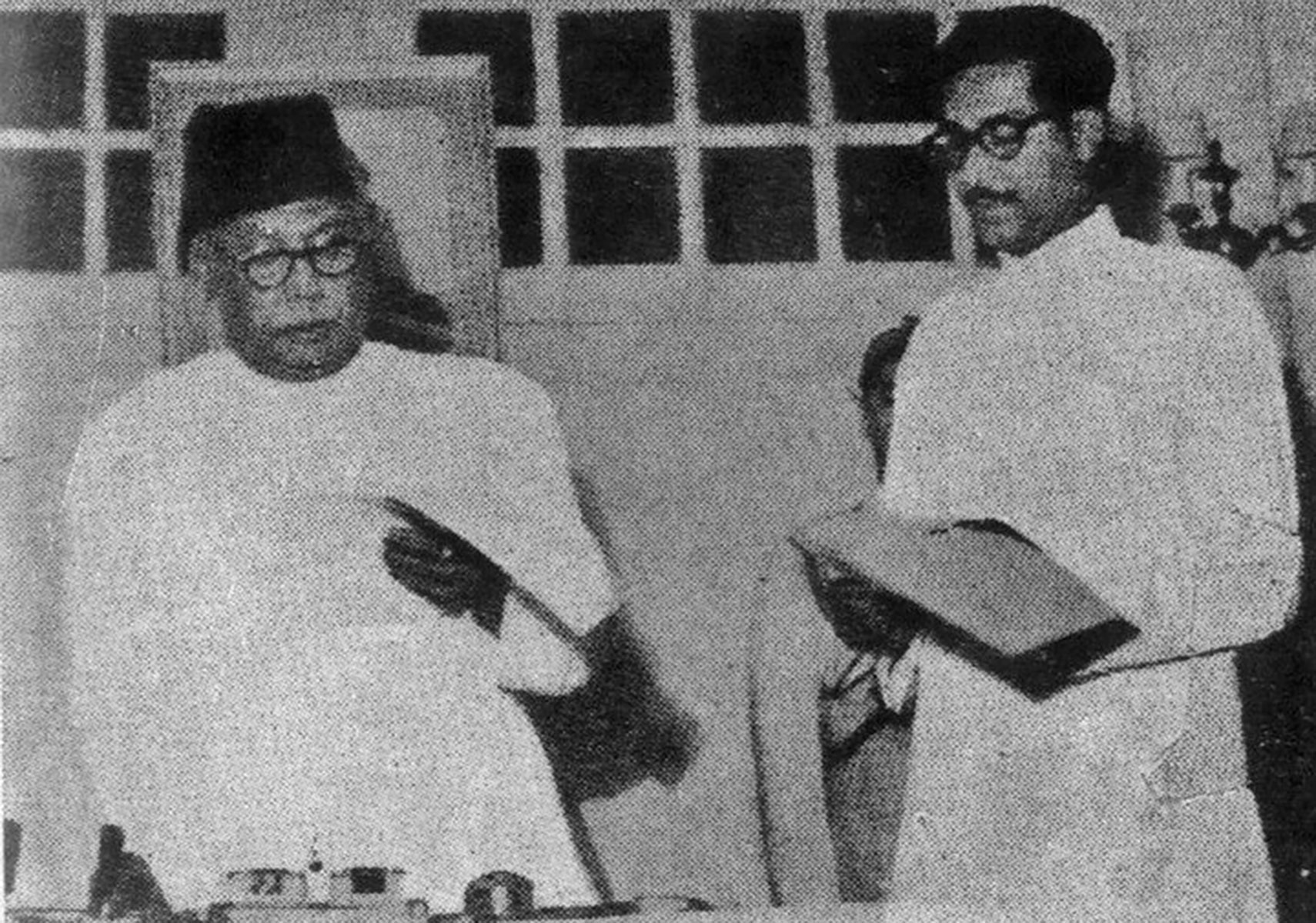 Abul Hashim was another important leader of Sheikh Mujibur Rahman’s initial years in politics. Both of them were followers of Huseyn Shaheed Suhrawardy though they had disagreement. Back then Muslim League owned Millat Press in Kolkata and Abul Hashim operated it on behalf of the party. Following the partition when he decided to sell the press to make up its debts, Mujib asked him to not sell it. He said to him, “I would thwart any attempt to sell the press and would ensure that no one came up with an offer to buy it.” Abul Hashim was really upset because of this. Suhrawardy also asked Mujib that why he had been rude to him. Then Sheikh Mujib apologised to Hashim. He stated in The Unfinished Memoirs, “Mr. Hashim was pleased because I had apologised to him. I might have had a difference in opinion with him, but it was difficult for me to forget that he had taught me the basics of politics. If I have been mistaken or if I have done wrong, I have never had difficulty in acknowledging my mistake and expressing my regret.”

Tofazzal Hossain Manik Mia, editor and owner of Daily Ittefaq and president of International Press Institute’s Pakistan unit, was a true benevolent of Bangabandhu Sheikh Mujib. Bangabandhu also respected him like an elder brother. When Manik Mia was arrested, he wrote about him in his Prison Diaries, “The news hurt me a lot. They even didn’t spare Manik vai? How far have they stooped! He is at the top among the journalists of Pakistan. A very few writers can stand against his pen. Especially his political analysis is incomparable. The situation of global politics can be understood easily by his column ‘Rajnoitik Moncho’. The mass readers find no difficulty in realising his writings. He can be termed as the best wordsmith.”

Sheikh Mujib constantly surprised his political rivals with his big heart. Veteran politician Shah Azizur Rahman vehemently opposed the independence of Bangladesh and rejected the accusation of genocide against Pakistan Army while leading the Pakistani delegates in the United Nations in 1971. Following the Liberation War he was arrested. Later in 1973, he got general amnesty. According to former press secretary of then Prime Minister (Shah Azizur Rahman) Abdul Malek’s article ‘Bangabandhu and His Political Opponent’, after being released from jail Shah Aziz directly went to meet Sheikh Mujib. Bangabandhu cordially received him and inquired about his wellbeing. He knew that Shah Aziz liked expensive cigarettes, but it would be tough for him to buy costly cigarettes as he was just freed from the prison. Thus he gifted him a cartoon of 555 cigarettes and asked if he needed anything else! Then Shah Aziz told him to provide some money. He fulfilled his demand right away. Bangabandhu also offered him a house in Dhaka, but Shah Aziz said as he was a free man then, he would be able to start his practice in court and buy a house. It is mentionable that during Shah Azizur Rahman’s confinement, his wife was unable to pay their house rent. As a result, the house owner got his family out of the house. When Bangabandhu came to know about it, he sent KM Obaidur Rahman to rehabilitate them. Consequently, he allocated a monthly allowance for his family.

Mahmud Ali was another politician who shook hands with Pakistan’s leadership in 1971. At the end of the Liberation War escaping Bangladesh he first went to England, then to the USA and finally settled in Pakistan. But his wife and other family members were in Dhaka. Researcher Golam Sarwar stated in his column ‘15 August: Mushtaq and Bangabandhu’s Forgiveness’, “When Bangabandhu heard that Mahmud Ali’s wife and children are in Dhaka, he immediately asked the police to ensure their security. A few days later he provided them passports and Tk 20,000 and allowed them to go to Mahmud Ali. Soon after the news spread, some Awami League leaders and freedom fighters got agitated. Bangabandhu told them if I could arrest Mahmud Ali, I would punish him. But I didn’t want to see that his wife and children are harmed.”

In the same article Sarwar penned about another seasoned politician Abdus Sabur Khan who launched propagation against the Liberation War in 1971. He was arrested in 1972 for his collaboration with Pakistan Army. He sent a letter from prison to Bangabandhu writing, “Brother Mujibor, you liberated the country. Today, you are the Prime Minister. We admit that we made mistakes. Does it mean we have to stay in jail?” After receiving his letter Bangabandhu released him within three days!

Golam Sarwar also mentioned the name of Chattogram’s Muslim League leader Fazlul Quader Chowdhury who opposed Bangladesh’s independence. He was arrested after the Liberation War. He was a friend of Sheikh Mujib. Mujib often sent homemade foods for him in jail. According to Sarwar being the Prime Minister Bangabandhu provided money secretly to underground communist leaders like Alauddin Ahmed, Abdul Matin and Mohammad Toaha.

Bangabandhu’s the then political secretary Tofail Ahmed wrote an article titled ‘Some Memories of Association with Bangabandhu’ where he stated, “As his political secretary I used to maintain one of his funds. Bangabandhu helped people with that fund. Apart from Awami League leaders he assisted many opposition leaders as well. But he strictly instructed me to keep their name and address secret.”

The afore-mentioned incidents are just a few examples out of so many instances of Bangabandhu Sheikh Mujibur Rahman’s liberalism. Unfortunately present-day politicians hardly follow his ideals and thus we have been observing a politics of annihilation and vengeance in our country. The nation is prepared to celebrate Mujib Borsho from March 17, 2020 to March 17, 2021. All these celebrations will go in vain if we, the politicians in a broader sense, don’t take any lessons from the life of Bangabandhu and fail to internalise those with a view to bringing about some positive changes in our polity.