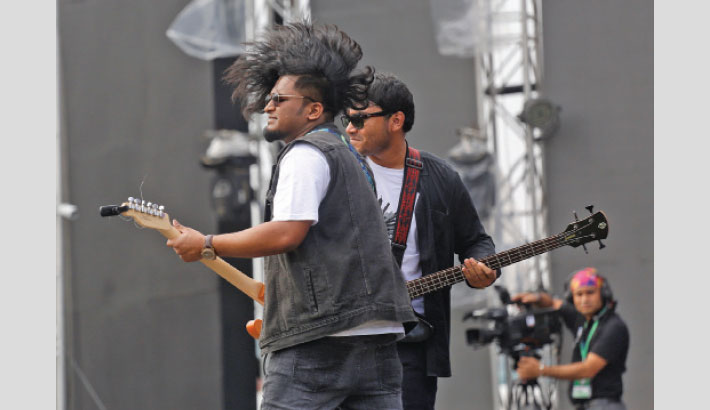 People who were born after the 70s have not witnessed the historical speech by Sheikh Mujibur Rahman. We have felt it in our hearts, heard of it from our parents and grandparents, seen it on TV or heard it on the radio and across different platforms. This year, Young Bangla has done something truly amazing through the Joy Bangla concert that has indeed created an everlasting imprint on the hearts of Bangladeshi youth. Young Bangla, which is the youth organization of Centre for Research and Information (CRI), organizes the historic Joy Bangla concert every year and also works with youths to spread the flame of our glorious Liberation War. For the first time in Bangladesh, a 3D hologram of the Father of The Nation giving his historic speech was made possible virtually. Bangabandhu Sheikh Mujibur Rahman appeared before thousands of people at the Joy Bangla concert on March 7, 2020 at Bangladesh Army Stadium through holographic technology. Commissioned by the Information and Communication Technology (ICT) Division of the Government of Bangladesh, the project to recreate the historic speech was implemented by NDE Solutions Ltd -- a subsidiary of National Development Engineers Ltd -- in partnership with a foreign company. Thousands of people, mostly youths, witnessed this wonderful moment through the virtue of technology. Honorable Prime Minister Sheikh Hasina herself graced the event with her delightful presence for the unveiling of this hologram. 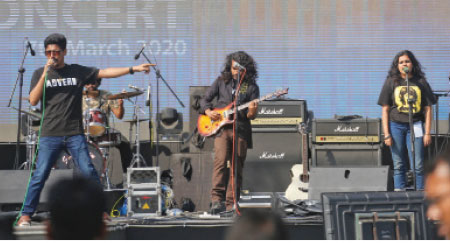 This was indeed an extraordinary moment that has become a legacy by now. Truly there can be nothing more amazing than celebrating Joy Bangla concert with one of the most covetous line up namely F Minor, Minar, Avoid Rafa, Shunno, Vikings, Fuad & Friends, Lalon, Arbovirus, Chirkut, Cryptic Fate and Nemesis. There were so many people coming in the venue that traffic slowed down that entire road. The energy and enthusiasm was vibrating all throughout that area. And why not? There is definitely no other event like this one!

The event commenced with the national anthem around 1.00 am after which was played the timeless and powerful quote of the Father of the Nation Sheikh Mujibur Rahman. Five university bands, namely Introit, Arekta Rock Band, Conclusion, Sin and Adverb, gave a rocking start to the musical segment of the event. These bands that were widely hailed in the UG scene for a long time were performing for the first time on such a big platform. “We are absolutely honored to be able to perform on such a huge stage,” said members of Arekta Rock Band.

Since this year's concert was the first mega event of ‘Mujib Borsho’ - the 100th birth anniversary of Sheikh Mujibur Rahman - Young Bangla arranged never-seen-before attractions too. Soon after, F Minor, Minar and Avoid Rafa took the stage one after another. Between each performance were quotes played by the Father of The Nation or presentations displayed related to Liberation War on the big screen. A refreshing fact about this year’s concert was the introduction of new faces. This was the first time F Minor, Minar and a few other bands and artists performed. For a long time, Joy Bangla concert was synonymous to rock and metal genre. However, this year there was a bit of pop, a bit of heavy metal, a bit of folk rock and a bit of pure folk. In fact, there was funky electro too. These and many other aspects made this year’s gig an exceptional one.

Afterwards, Arbovirus, Cryptic Fate and Nemesis took the stage one after another. As Arbovrius sang “O amar desher mati”, everyone became emotional. They also did some of their hit original tracks. Cryptic Fate was loud and powerful. As they performed the song “Bhorer Opekkhai” – a song that begins with the speech of Bangabondhu, everyone started cheering loudly.

Last on stage was the band Chirkut. “This is the first time a female fronted band is being the headliner of such a big platform. I am very honored,” said Sumi, vocalist of the band. Chirkut performed a patriotic song and also some of their popular hits. All throughout the event, there were huge slogans of ‘Joy Bangla’ by the performers and the audiences. It was indeed a memorable event!