A Trip to a Wi-Fi Village 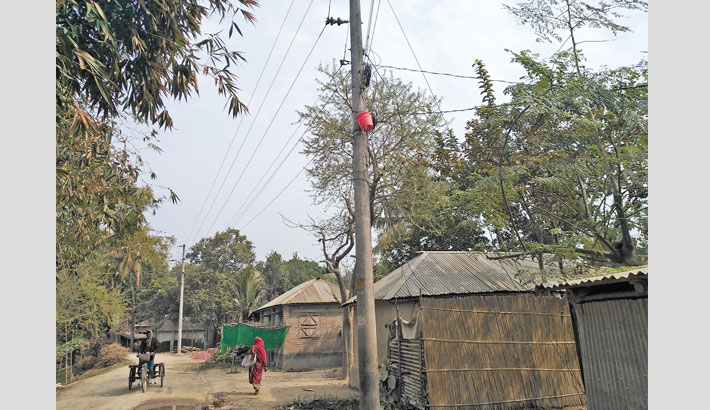 A big portion of our public varsity students comes from villages. Even the high officials and their peons too have come from rural areas. As an agriculture-based economy,  villages are considered to be the hubs of all economic activities of the country. Since our school days, we are accustomed of drawing images of ideal villages. A common scenario of villages peeps up on the minds of every child who grow up with the mental setup that he/she had drawn in primary schools.

The dewdrops on crop leaves in the early morning, people going to croplands at dawn, a river crossing through the village and a small bazaar on the bank of a river, playing cricket with balls made of clothes, students reading under lamps and so on flash in the mind when we think of villages. These are the characteristics of a village that we are commonly accustomed with. But the notion proves to be wrong after visiting a Kushtia village of one of our friends, Srabon. It is located in the remotest area of Bangladesh and about 300 km away from Dhaka.

As part of our vision to visit all districts of the country, recently we wished to pay a visit to Srabon’s residence. Srabon is one of the vibrant figures on the university campus amongst our quorum. We expected a refusal from him as the common cases as he does but, this time, he responded to our wishes blissfully within no time and he took all the responsibilities to organise the trip as a host.

Konok, Munna, Asif, Aqib and I along with Srabon set out in a golden sunny morning from the Jahangirnagar University campus to Srabon’s village and reached at night propelling about 300 km distance. His village is exactly located at a triangle of Kushtia, Chuadanga, and Meherpur districts.

Getting fresh, we were chalking out an itinerary for coving three districts, at that time, Srabon’s two grader younger brother came to us and asked whether we need Wi-Fi password or not! We got stuck for a while because our experience was bitter for the poor level transportation system on the way and the infrastructures was not bearing any update sign. That is why, this type of offer was like an Aladin’s magic lamp.

The most astonishing as well as the most interesting thing happened on the following morning while taking bath in a water reservoir, that is streaming at the edge of the village. We discovered a Wi-Fi router. The Wi-Fi router is suspended from an electric pole next to a house so that several houses can enjoy better internet experiences using a single router. The suspended router is kept in a closed bucket so that fog, rain, or scorching heat cannot damage it.

We discovered many more such type of suspended routers in the village. Shanta Cable Network has taken the initiatives to bring the villagers under a high speed internet service. The impact of the internet connection is worth-mentionable. All educational institutes, including primary schools, are brought under Wi-Fi network for providing better schooling using updated technology. The Headmaster of Ashannagar Government Primary School shared his experience to us that they had a multimedia classroom previously but due to having no high speed internet service it was not functioning, but now we are taking advantages from here for the betterment of our students.

A member of local Union Parishad, Nowab Ali, shared his assessments describing the positive and negative impacts of the service available at the village. According to him, the main beneficiary groups are the families of diasporas and students. This is because,  diasporas are getting connected easily with their family members which helps strengthen family ties and students are getting internet access to be connected with the world.

Unemployed youths are entering into freelance market learning basic graphics designing, web designing, web development courses and they are earning handsome money from there. The Wi-Fi facilities are helping to reduce unemployment problems. Consequently, the social culture is being reformed quickly. But some perverted youth are getting addicted to off scenes and it is a big concern for the society. An urgent solution is a must to address the issue, said Tanvir Ahmed, a student of Kushtia Government College.

Exploring the whole village, we talked to Srabon’s father, Md Helal Uddin, a homoeopathy doctor, about the effects of internet connection. He shared us about his experience of learning internet usage from his young offspring. He is planning to bring his profession under computerised system as he has recently undergone a professional relevant computer course at the age of 58.

The writer is a student of the Department of Chemistry, Jahangirnagar University. He can be reached at [email protected]