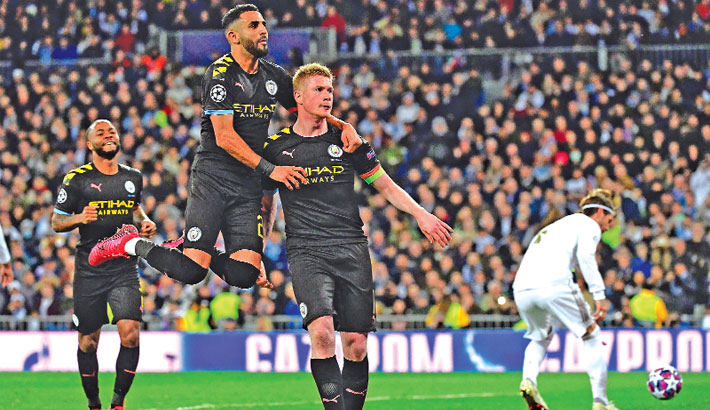 Manchester City’s European ban means they are under enormous pressure to win the Champions League this season and they are one step closer after arguably their greatest result in the competition at Real Madrid.

Nothing is won yet, not even after City’s 2-1 victory in the first leg of the last-16 tie at the Santiago Bernabeu on Wednesday, as Pep Guardiola was keen to point out.

Real, who been European champions a record 13 times, have a history of dramatic comebacks.

However, City’s first-ever victory against one of Europe’s traditional giants in the knockout stages of the Champions League was vindication for Guardiola.

“For us to win at the Bernabeu is a great satisfaction for us,” said the City boss. “It is incredible to be able to win here for us because we are not used to doing such things. “We hope it will help us in the future to believe in ourselves and to be able to go to any stadium and play the way we have.”

Guardiola said earlier this week City’s two-year Champions League ban, pending appeal, imposed by UEFA for breaching financial fair play rules, would not act as a spur for his players.

But it was on the minds of travelling fans in the Spanish capital, who were singing against European football’s governing body from almost the first minute.

The Catalan is now the visiting coach with most victories at the Bernabeu, with six. But he would have been first in line for criticism had another surprise team selection gone wrong.

Guardiola has re-written the record books domestically in his four seasons in England, but has never progressed beyond the Champions League quarter-finals with City.

The decision to leave Sergio Aguero, Raheem Sterling, Fernandinho and David Silva on the bench, push Gabriel Jesus into an unfamiliar role wide on the left and often leave the creative force of Kevin De Bruyne isolated up front could easily have backfired.

City were trailing 1-0 when Sterling was introduced from the bench 17 minutes from time.

The England attacker’s presence pushed Jesus and De Bruyne into more natural roles and within five minutes they combined as Jesus headed home the equaliser.

A Sterling burst then lured Dani Carvajal into an ill-timed lunge to concede a penalty. De Bruyne stepped up to convert and City could have put the tie to bed with more chances in the closing stages.

“It was arguably Sterling’s 17-minute cameo that turned the game, rising from the bench like a sharp stone from a catapult, aimed directly and devastatingly at Real’s defence, playing a part in both goals,” wrote The Times newspaper.

Guardiola succeeded in protecting a defence that has often been exposed in the Premier League, with Real restricted to three shots on target.

Guardiola will undoubtedly have his own plan in the second leg and City still have much more to do to finish the job. But they will always have the Bernabeu win and it is for nights like this they fought so hard to bring Guardiola to Manchester in the first place.