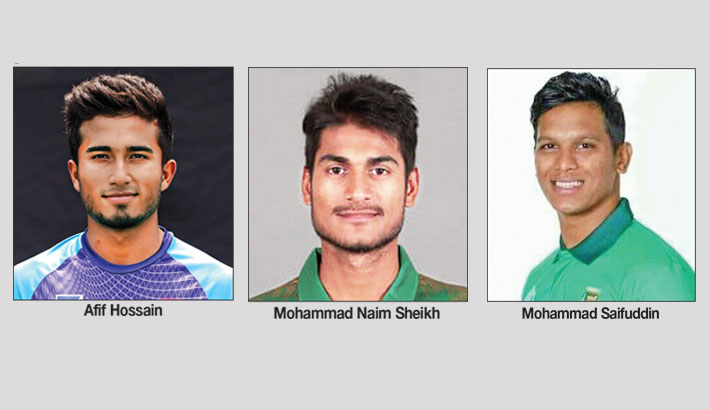 Bangladesh National Cricket Team youngsters, who broke into the ODI squad for the three-match one-day series against Zimbabwe, are gearing up to make their mark in the national team ahead of the series.

Spin all-rounder Afif Hossain, opening batsman Mohammad Naim Sheikh and all-rounder Mohammad Saifuddin- are featuring in the 15-member squad for the 50-over format.

As uncapped Afif and Naim will be looking forward to make their first appearance in the white ball cricket while Saifuddin will return after a long break due to his injury.

Afif made his debut against Sri Lanka in February 2018, since then all-rounder has played ten T20 matches with the national team.

After been selected for the national team’s ODI squad, Afif said that it is like a dream coming true for him as he said that he will be looking forward to set his mark with his performance as they have been practicing for the shorter format.

“I was excited to play (in ODI). I was playing the T20s and was waiting for the ODI call-up. That dream has come true. I will try to do something good for the team,” Afif told reporters on Wednesday ahead of the ODI series.

“I don’t think there should be any problem (adapting to the new format) because everyone is practicing, playing on regular basis. I hope I can perform,” Afif said.

The right arm off-spinner, who is also flexible in batting at top order said, he will try his best if he is handed any responsibility for the team.

“I will try to perform to the best of my ability, if I get the opportunity. Whatever the plan is, the responsibility I get, I will try to play accordingly,” Afif said adding that he can bat with more ‘patience’ if he is batting from top order.

“That depends on the batting position. If I can bat on the top-order, then I can play with patience and if I play down the order, I will have to play the way the team require,” he added.

Naim Sheikh, who made his debut against India back in November, 2019, has played five T20 matches for the Tigers.

The 20-year-old top order batsman has been very consistent throughout that T20 series as he was the top scorer of the three-match series with 143 runs with an average of 47. The left handed batsman scored 81 runs in the final match of that three-match ODI series.

Naim’s efforts were rewarded as he also got the opportunity in to play against Pakistan in the T20 series in January-February where he scored another 43-run innings in the first match.

Naim informed that his preparation for the white ball cricket started early as he had already been instructed to practice with the white ball while he was featuring for BCB XI in the practice match ahead of the solitary Test against Zimbabwe.

“I feel good as I have got the call for the ODI team,” Naim told reporters.

“The coaches told me to practice with the white ball when Zimbabwe were playing against BCB XI. They said I could play in that format. I already had discussions with the coaches,” Naim stated.

Leaving what he has done in past in BPL, Naim said that he is looking forward to the next challenge which is coming forth. “What is past is past. Now I am thinking of what is coming next. I will try to execute the plans I have been making,” said Naim adding that he enjoys taking new challenge as he has already discussed with the senior members of the team regarding these aspects of the match.

“I always enjoy playing with challenge. If everything is easy, than it won’t remain interesting,” said Naim.

While Naim and Afif are set to make their debut in ODI, pace all-rounder Saifuddin will return to national team ODI side since his long break after the ICC World Cup 2019.

After getting the opportunity to return to the national team ODI squad, Saifuddin said he needs to feel the excitement as he returned to the national after following the instructions to complete the rehabilitation process.

“Not the pressure, we need to feel the excitement,” Saifuddin told reporters.

“I have got the discharge letter from the medical board. Now I don’t have any restrictions. I played BCL, there were some restrictions namely I could not bowl more than eight overs in one innings. That was almost two weeks back. Now I hope I can give my hundred percent,” concluded Saifuddin.