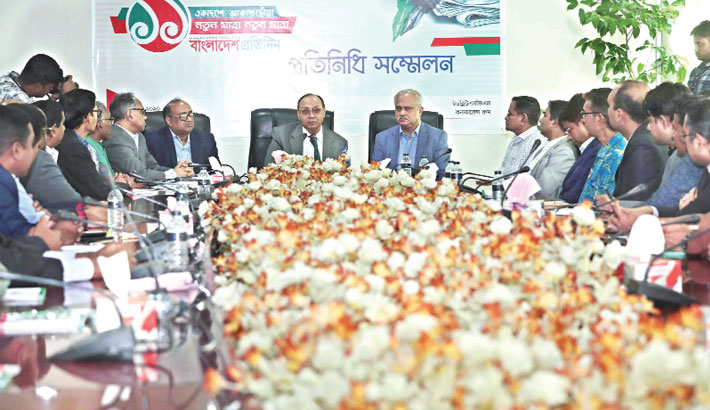 Bashundhara Group Chairman Ahmed Akbar Sobhan on Wednesday said common people have high expectations of Bangladesh Pratidin, as it has topped the list of the highest circulated dailies all over the country.

In the past, people were not bothered about what a newspaper wrote, but now they are well aware of it, he said.

The Bashundhara Group Chairman made the statements at a conference for district correspondents of Bangladesh Pratidin at the conference hall of East West Media Group Limited in the capital.

He said, “The daily which has the highest circulation is going to mark its 10 years of journey. Now it has ranked first in New York and London.

Readers want some changes in the news every day. Hundreds of newspapers have gone out of existence for not providing public-oriented news. In the competitive field of journalism, it is difficult to survive.”

The Bashundhara Group Chairman urged the district correspondents to consult with their editor before making any news report when it goes against a person.

“Sometimes, biased news reports are used to attack opponents. We want the truth to be revealed.”

“Bangladesh Pratidin has published many news items which some people did not like, but they were based on facts. A number of newspapers have ceased to exist, but many hundred-year-old newspapers like Times from London, Financial News and Washington Post from America are still running,” Ahmed Akbar Sobhan said.

At the event, the Bashundhara Group Chairman announced awards for the best reports of local correspondents of the daily.

Speaking on the occasion, Bangladesh Pratidin Editor Naem Nizam said the print media sector is going through hard times due to the dominance of news portals.

Concerted efforts by everyone in this field can help make the sector survive, he added.